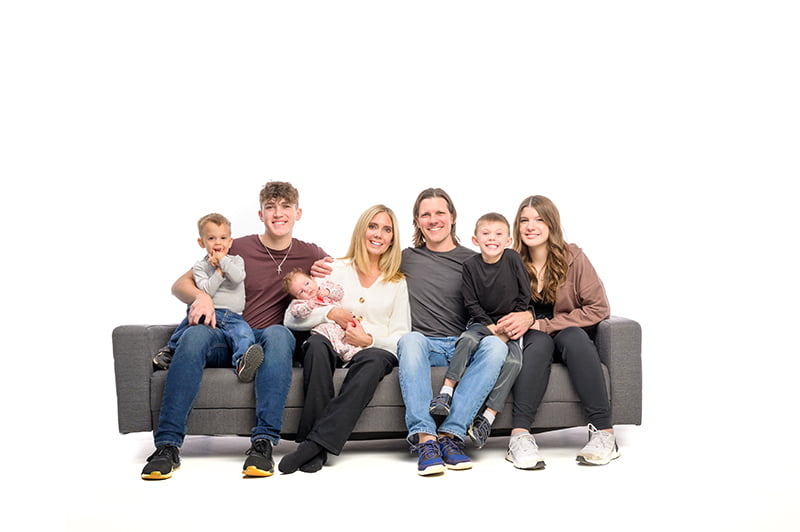 “I was very busy while I was unconscious,” says Danielle Campo-McLeod of her nine days in a medically induced coma.

While the Paralympic gold medalist has vivid memories of some of her coma “dreams,” she doesn’t recall much about the actual events that followed the birth of her daughter, Morgan, on August 17th. Her family, however, remembers every minute.

For two months, the Campos and McLeods lived hour by hour as Danielle fought against seemingly impossible odds, recovering from septic shock after complications from a caesarian section and subsequent bowel surgery.

“Figuring out what actually happened and what happened in my subconscious took a really long time,” she says.

Now, after the harrowing health scare that saw her transferred from Windsor to London and back again, Danielle is finally at home with her husband Denny and their five children, re-building her strength and piecing together the events that lead to the 36-year old battling for her life.

Her doctors call her recovery, “better than best case scenario”. Her mother Colleen calls it a miracle.

“God kept putting things in place for us,” says Colleen. “That is my true belief.”

Danielle says her pregnancy with Morgan came as a complete surprise. Although the couple were elated to be welcoming a baby girl to their brood, Denny worried how a third pregnancy would affect Danielle’s physical health. On a new medication to treat her neuromuscular disorder, he was concerned the pregnancy might erase some of the gains she had made the past year.

“It was kind of a roller coaster ride right from the beginning,” she admits.

Schedule to deliver her daughter by C-section on August 18th, Danielle had her surgery bumped up a day early after she arrived at OB triage with painful cramping and contractions. Shortly after the surgery began, she knew something was wrong. Having two previous C-sections for her sons Corbin and Sam, she said this time, things just felt off.

“It was a different kind of pain and pressure,” she explains.

When Danielle was unable to pass gas or move her bowels after the birth, doctors suspected she had an ileus bowel; a buildup in the intestines which is common after abdominal surgery.

When the bowel obstruction didn’t clear on its own and an x-ray and CAT scan gave no answers, doctors performed exploratory surgery to discover the root of the problem.

“We think there was scar tissue from the previous c-sections,” explains Colleen. “When they opened her up, they realized there was a piece of the bowel that had torn away with that scar tissue and became necrotic.”

Danielle underwent a bowel re-sectioning on August 27th, removing over four inches of dead tissue and repairing the hernia that had formed between the sub-layer of muscle and bowel.

After 21 days at Windsor Regional Hospital’s Metropolitan campus, she was finally released on September 7th, but her homecoming would be short lived. Just over 24-hours later, Danielle fell ill and was rushed back to the hospital via ambulance suffering from shortness of breath.

Doctors determined she was in septic shock and performed emergency surgery to suction out the toxins in her body. Danielle’s blood pressure plummeted shortly after, and hospital staff began preparing the family for a worst case scenario.

“They told us she was crashing and we were going to lose her,” recalls Colleen. “They brought us into a little room and they told us they were going to do everything they could to save her. We told them to pull out all the stops, just save her life.”

“I went through so many emotions like, ‘Why is this happening?’ ‘It can’t end like this,’” remembers Denny. “I realized how dire things were and how close she was to leaving and I didn’t want to think about it more than a second.”

Danielle was put into a coma as doctors tried to level out her blood pressure. On September 12th, after three days of no improvement in her condition, it was decided she’d be transferred to University Hospital in London via Ornge land ambulance.

“The doctors rushed us into the little room again and told us her heart was failing and they’d have to move her to London if she had any chance of surviving,” remembers Colleen.

“The trip was super risky,” says Denny. “They said she only had a 10% chance of making it.”

Dr. Syed Anees, a respirologist and one of Danielle’s ICU doctors, insisted on accompanying her on the trip.

“He broke protocol to jump in the ambulance with me and the ICU team in London kept telling me after I woke up, ‘You had an angel with you because he saved us two hours of reading and figuring out medications,’” says Danielle.

“If anyone could keep her alive for that hour and a half ride it was him. That was another miracle,” says Colleen.

With a massive team of doctors from nearly every discipline overseeing her care, Danielle once again defied the odds. On September 14th, her condition had finally improved enough to be woken from her coma.

“I remember waking up and seeing the vent tube coming out of my mouth and thinking, ‘what the heck is happening?’” Danielle recalls. “I wasn’t able to move my body and I did believe I was paralyzed for the first little while. I remember thinking maybe we got in a car accident on our way to the hospital.”

Danielle says her time in a coma felt real, like living in her own little world. She remembers flashes of sitting with her deceased uncle, ordering thank you gifts for the ICU nurses, texting her old swim partner, and even rocking a baby that turned out to be a young cousin who had passed away years before Danielle was even born.

She also brought some of what she heard around her in the “real world” into her subconscious.

“I would definitely tell people that if you ever have a loved one in a coma, talk to them because I definitely heard it and brought it into my dream world.”

The young mother was finally able to share her stories with her family when her ventilator was removed on September 18th, allowing her to breathe on her own, regain her voice, and begin her rehabilitation.

A CAT scan a few weeks later showed the infection had completely cleared. The doctors couldn’t believe it, and neither could the family.

“We were counting down to that scan and we were prepared to have to maybe come home with an IV bag of antibiotics,” explains Danielle. “We weren’t prepared for them to say ‘It’s gone, we don’t have anything else to do, you can go.’ We were shocked.”

Danielle returned to Windsor on October 19th for inpatient rehabilitation at Hotel Dieu Grace Healthcare’s Tayfour campus. She was discharged October 31st, just in time to take the kids trick or treating.

While reuniting with her family has brought her indescribable joy, Danielle admits the events of the past few months have left her struggling with PTSD.

“My muscles are coming back faster than I think the mental health part will,” she says. “We’re in this euphoric state because I’m alive and I am getting stronger, but then you get these grounding moments that bring you back to reality. This is really hard and it will be for some time.”

“When I left London, there was all of this anxiety of not being hooked up to a machine that’s telling them my heart is beating, or not knowing what my white blood cell count is,” she reflects.

In addition to receiving counseling, Danielle is now completing outpatient physiotherapy several times a week at the Tayfour campus; relearning how to walk, rebuilding her core strength, and working hard to adjust to her “new normal.”

“It’s really hard to be in this athletic body that’s not really moving yet, but it’s totally ok because this body is living and breathing,” she says.

Follow-up tests are scheduled with her London doctors in early December to view her progress and discuss the potential for reversing her ostomy bag.

Danielle’s story is one that has captivated the community, with thousands of people from across Windsor-Essex and the world following along on Facebook as Colleen and Denny posted regular updates on Danielle’s condition.

“I couldn’t call or text everyone so I just told them, ‘I’ll put it all on Facebook,’” says Colleen.

“Denny would get in trouble from complete strangers if he didn’t post updates fast enough,” laughs Danielle.

Social media became a place for the community to rally behind Danielle and her family, lighting candles and holding nightly prayer vigils.

Colleen says the candle lighting began after an unexpected conversation with a Hindu faith healer the night Danielle was rushed to the hospital.

“A neighbour of Danielle and Denny’s came and knocked on the door and told us her cousin is a Hindu faith healer and she’d like to pray with me and Linda (Denny’s mom),” she recounts. “We got on the phone with her and she said, ‘You need to get a candle and you need to light it now.’”

The woman said, “You have no idea what this candle is going to signify in your daughter’s journey.”

The pair rushed around searching for a candle and lighter, finally tracking one down and lighting it.

There was a feeling they just had to do this, she says.

That next day during a TV interview, Colleen asked anyone watching to light a candle as well, prompting countless social media posts of people displaying everything from tea lights to giant decorative Christmas candles, all lit in support of Danielle.

“The things that have happened during this time have just been incredible,” says Colleen. “We’ve gotten emails from Tuscany, the Philippines and South Africa saying, ‘I want to show you my candle, I saw your daughter’s story.’ It’s all over the world.”

“I don’t know how I’ll ever pay back the Windsor-Essex community for the lighting of the candles and all the support,” says Danielle. “I keep thinking, ‘how am I going to do that?’ and I really think it will be just small things. It doesn’t need to be on an Olympic scale, it feels like it’ll be whatever comes authentically and feels right. But I’ll never stop thanking our community for rallying behind us the way they did.”