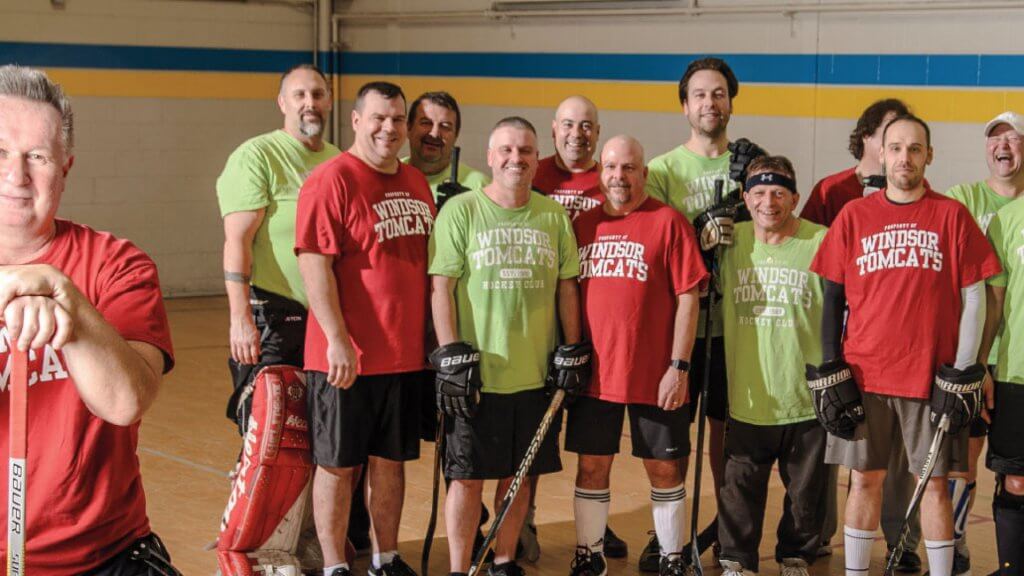 A group of transplants from Toronto, London, Ottawa, Hamilton, and Oshawa started playing in a basketball league at St. Vladimir’s Church in Windsor. They dubbed themselves the Fabulous Thunderbirds. After two years, they traded in their basketball and equipped themselves with floor hockey sticks.

Steven Jaworiwsky is one of the original members.

“In the early days, we had about 12 guys. The goalies wore a baseball glove, volleyball knee pads, and a hockey glove as a blocker. We played three on three and in the early days sometimes there were no spares. Today, goalies wear full equipment with masks but are not allowed to use a goalie’s stick. They use a regular junior player’s stick so that they cover less net for more goal scoring.”

Jaworiwsky crafted a new name for their team: the Windsor Tomcats

“The Tomcat name came from the F-14 Tomcat, a fighter jet used by the air force in the late ’80s. If we were to be starting today, I guess the name would be the Windsor Hornets, as per the F-18 Hornet fighter jet used at the present time by Canada and the USA.”

The group welcomes new players who are brought in by current ones. Before the new guy can join (and then enjoy a beer afterwards), he has to pass the selection process. “You have to present the player you want to bring out and explain to us who he is and if he is a good guy. Hockey talent is not the major factor. If he is a nice guy, he will fit in.”

This group of friends isn’t about throwing any punches

“I remember when we first started, I was told about a hockey league at the Ciociaro Club. You basically paid $5 to fight, and very little hockey was being played. We all have full-time jobs and need to go to work in the morning and when all is said and done, the fact that you won a game or two that night means absolutely nothing. Like Jerry Seinfeld says, ‘we’re just raindrops on a windshield.’ Guys get it, so we don’t have any problems.”

“There has been a board of directors for about 20 years and the board deals with everything from issues on the floor to expenditures to discipline (if needed).”

“When our kids were younger, we used to have pool parties in the summer and kept the guys together. That evolved to a golf tournament, which was held in the third week of June. Now we say our goodbyes in April until the third week of September.”

Jaworiwsky started a newsletter called The St. Felix (named after Felix Potvin, the goalie for the Leafs at the time) in 1992 to keep the guys interested in coming back, and eventually produced 181 issues, writing funny, fake quotes from the players like, “We got a lot of calls about the Rake like we do every trade deadline, but the other teams were never offering enough for this superstar player and so we decided to keep him.”

These issues are archived on the Windsor Tomcat website, along with their current weekly blog and summer announcements. Each player even has his own nickname

“Guys will tell me they’ll be out with their wife and run into a fellow Tomcat at Home Depot, and they’ll introduce them to each other like, ‘Oh honey, this is the Falcon. This is my wife, Betty.’ After they part, the wife would ask, ‘What’s his real name?’ and the husband would say, ‘I don’t know, I just know him as Falcon.’”

Tuesday nights and their February tournament are the Tomcats’ time to have fun.

“No matter how hard a player will play against another player, the guys will have a laugh afterwards as they enjoy a cold beverage. The friendships and camaraderie over the years has been incredible. As long as we have been running the hockey, we have also been going to Battle Creek, Michigan, on a golf trip. Twelve guys go in the second week of September and we call it training camp.”

One of the players, Sniper Chevy says, “If you don’t like to laugh, play golf, and drink beer, then this trip is not for you.”

The Windsor Tomcats have played against outside teams, but the Tomcats saw the high levels of competition and the fun was lost. After those experiences, Jaworiwsky explains, “a famous Tomcat said, ‘I’m not playing travel ball hockey anymore.’”

At the end of the day, it’s all about laughter, togetherness, and enjoying a long-loved game with friends.

A Crazy Idea with a Cause