A quarter-century of doing it right 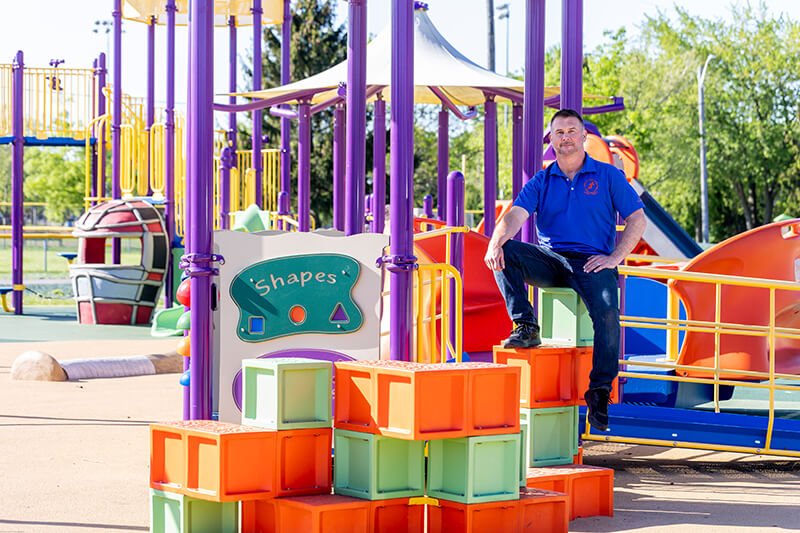 When you come across one of Mark Jones’ playgrounds, there are some telltale signs that he had a hand in its creation. His playgrounds are colourful, quality, imaginative, and, most-of-all, accessible at all.

When Jones started in the playground design business a quarter-century ago, he describes the market of yesterday as dull, flavourless square and plain structures that were geared only towards children with full abilities. As someone with both relatives and friend’s children who had nowhere safe to play, he took umbrage with the lack of play options for special needs children and made it his passion.

“When we went to these playgrounds, I would see families playing but other children within these families sitting on the sidelines watching,” recalls Jones. “To see this time and time again was very heartbreaking.”

When Jones joined the Playworld team with New World Park Solutions, he says he knew he was getting involved with two fantastic teams.

“Playworld is the original when it comes to accessible play,” explains Jones. “They were and still are way ahead in inclusive play. They have developed a full training course and catalogue on how to design for inclusion. I knew this was the manufacturer for me. This has been a dream for me to try to make as many playgrounds as accessible as I can in my lifetime.”

Through career-long training and dedication, Jones has stayed on top of the latest trends and products for children with disabilities.

In the Greater Windsor Area, nowhere is Jones’ expertise on display like the Farrow Riverside Miracle Park.

Located in the heart of Olde Historic Riverside, the Farrow Riverside Miracle Park is a popular destination for children across Windsor-Essex, regardless of ability, with its state-of-the-art accessible playground and Miracle League sports field.

“This was one of my greatest accomplishments, working with this amazing group of people,” states Jones. “I can not say enough about the people who got this group going and ran through so many obstacles to get what they dreamed of and now they have one of the most beautiful parks that I have ever had the pleasure of being involved with.”

When the Riverside Minor Baseball Association contacted Jones about the creation of the Miracle Park, Jones says they had a clear vision in mind.

“I have been approached by many people and organizations in my time who have had similar aspirations but really had no idea of the work and expense involved,” he explains. “Most of these never really even got off the ground. However, I knew many of the people involved in this group and I knew it was going to happen.”

Jones was passionate about making the project happen and donated a large portion of money, including his own profits, to make sure they could build the best playground they could get. Playworld stepped in with significant discounts to help the project along.

“I do get a lot of compliments on the Miracle Park, but all the credit must be given to the Miracle League,” states Jones. “To see a group of people work that hard to make a park like this is something that just makes you want to be a part of it—no matter what. They are heroes in this community, as far as I am concerned, and I am honoured to be a small part of it.”

It is Jones’ belief that all children deserve the right to be able to play and that if a playground doesn’t have something for everyone, regardless of ability, the playground has failed. He applies this belief to every playground he builds, but older playgrounds in need of replacement might not fall into his capable hands.

“What I started doing a few years ago was trying to add at least one element to as many playgrounds as I could within my financial ability,” explains Jones. “I looked at the most-used thing on a playground—which was swings—and came up with a very easy way to start with that. This is when I started my accessible swing donation program.”

At over $1,000 a pop, Jones donated accessible swing seats to as many parks across the region as he could. He figures that he has put over $100,000 into parts and labour at this point. However, that project went on hold at the dawn of the COVID-19 pandemic.

With the pandemic, he gained a new focus. Hearing about an elderly man struggling to find bare necessities in a local grocery store, from his daughter, he sprung into action and created an online network of as many as 1,000 local volunteers to help local at-risk seniors. Jones put over $10,000 of money he had put aside into finding and buying necessities for seniors, the disabled, and other people at-risk. He says, in the end, his network helped over 10,000 people. From there, he was asked to become an organizer for the inaugural June 27th Miracle. Due to COVID-19 restrictions, and playground building not being deemed essential, Jones had time and energy on his hands and went to work. The event would end up involving over 10,000 volunteers and set an unofficial world record for largest single day food drive.

With the pandemic slowly fading into the distance of the public conscience, Jones has turned back to playground building. He says that, post-COVID, business has been slower, but is starting to pick up. It excites him, as the better the business gets, the more he can get back to donating swings and to places that care for the disabled.

“COVID was a blip in the radar where it was obvious to me that I had to focus on that at that time,” states Jones. “However, I feel we have controlled that and I can go back to focus on my true passion of helping those with disabilities.” “However, I will always be ready and prepared to be there for my community if another serious situation occurs. I hope and pray it doesn’t but, if it does, you can count on me to be there.”