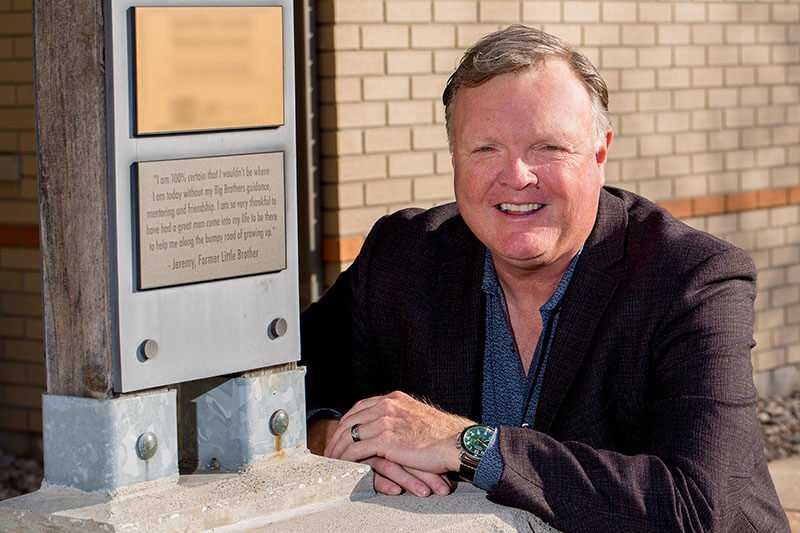 If you ever wonder how you can make a difference in the world, think of Ernest Coulter.

Mr. Coulter was a young New York City court clerk who, in the first years of the 1900s, noticed an increasing number of boys passing through the courtroom.  He wondered if interacting with caring adults might help the kids stay out of trouble, so he set about finding volunteers.  In 1904, Mr. Coulter enlisted 39 men, each of whom agreed to befriend one boy, marking the beginning of the organization we know today as Big Brothers Association (which, notably, joined forces with Big Sisters International in 1977).

One person who sought to make a difference was retired Windsor Police Service Sergeant, Brett Corey.  Born in Montreal, Brett went through high school in Ottawa, and moved to Essex County in 1981 to attend the University of Windsor, where he studied human kinetics.

“I was about twenty-one years old, living in residence,” he recounts, “and one day I saw a poster about Big Brothers in Vanier Hall.  It was a time in my life when I was looking for a way to give back to the community.”

He describes the Big Brothers background check as “fairly extensive”, which included a series of in-person interviews.

“The vetting process is thorough for all of the obvious reasons,” Brett says, “but it’s also intended to find the best match between big brother and little brother.”

Following the interview process, Brett was paired with a boy named David, who was seven years old and lived with his mother in West Windsor.

“It was going pretty well,” Brett remembers.  “Every relationship takes work, but Big Brothers did a good job matching us.  Unfortunately, after about a year, David’s mother decided to move out of Windsor, so my match with him ended.”

Brett’s caseworker, Linda, contacted him to ask if he was interested in another match.

“So, they wanted to match you with another boy right away?” I ask Brett.  “Is there really that much need?”

Brett takes a moment, as though wondering if my question is serious.  It is.  Then, he says: “Big Brothers has a list of kids waiting to be matched.  At any given time, there are at least a hundred names on it.  And they just sit and wait until another volunteer becomes available.”

Brett told Linda he wanted to continue with the program.  That’s when he was matched with Jeremy.

“I was about twenty-two, by then,” Brett says.  “Jeremy was eight.”

Their interaction was casual.

“I took him to see movies,” Brett recalls.  “We went bowling a few times.  The thing he really homed in on was ice skating.  So, we’d find some ice—a pond, the lake, anywhere—get our skates on, get out there with our hockey sticks and just pass the puck around.  He loved that.”

There are a few misconceptions about being a Big Brother that should be cleared up.

People who are interested, but are hesitant to volunteer, often have a few common concerns.  One is: “Big Brothers is a great idea, but I can’t fit it into my schedule.”

“It can be an hour or two a week, and doesn’t have to be a set routine,” Brett says.  “As long as you’re adaptable, and the little brother is adaptable, you can make anything work.”

Another concern is: “I can’t afford to take a kid out all the time.”

“It’s not about spending money,” Brett continues.  “It’s about time, being present, being interested.  Just sit talk.  Go for a walk.  Big Brothers does a really great job of pairing men with kids who have common interests.  The kids are not looking to be entertained.  They just need a positive male role model in their lives.  Once you start interacting, you see how much they want that.”

“They offer a lot of support,” Brett says.  “Big Brothers wants your match to succeed.  You’re always connected to the organization through your caseworker.”

One more concern that arises: “Do I have to get involved in the child’s home life?”

“You don’t get involved at all,” Brett says.  “The point of a big brother is to just spend time with the child, away from their home.  Whatever is going on there, your caseworker tells you, ‘That’s not your responsibility’.  Any concerns you have, bring them to your caseworker.”

Jeremy’s passion for hockey intensified, and he also took a great interest in his big brother’s new career when Brett was hired by Windsor Police.

“I had just started policing, and I shared most of the things I was learning, there,” Brett recalls.  “He had a lot of questions.”

As Jeremy’s interest in hockey continued, Brett outfitted him with hockey gear and got him signed up with Windsor Minor Hockey.

“After being a poor student, I finally had a little money in my pocket,” Brett says.  “and it was something I was able to do.”

All told, Brett was Jeremy’s Big Brother for eight years.

“There comes a time when matches are ended, officially,” Brett explains.  “Big Brothers has a start-point and a termination-point, when kids are around fifteen or sixteen years old.  When Jeremy and I reached that point, we just naturally stayed in contact.”

Jeremy’s father was originally from Florida and had moved back when Jeremy was young.  As Jeremy entered his teen years, he decided he wanted to live with his dad so he attended high school in Florida and even landed a hockey scholarship at a college.

Even while in Florida, Brett and Jeremy stayed in touch, through the odd long distance phone call, writing letters occasionally.

“Then I got a call one day,” Brett remembers, “where Jeremy told me he was applying to the Orange County Sheriff’s Department.  It was amazing how everything seemed to come full-circle: playing Windsor Minor hockey had a role in him getting a scholarship.  And then becoming a police officer.”

In August of 1998, at 22 years of age, Jeremy became a Deputy Sherriff with the Orange County Sherriff’s Department in Orlando, Florida.  Today, he is married, has children of his own, and has risen to the rank of Sergeant.

“When I first joined Big Brothers, I looked at it as a one-way street,” Brett says.  “What I could give to Jeremy.  What I found was, as the relationship progressed, I was getting as much out of it from him, as he was from me.”

When the new Big Brothers Big Sisters of Essex building was constructed on Jefferson Avenue, one of the plaques in the front bears a quote from Jeremy, speaking about his experience with Brett and the program: “I am 100 % certain that I wouldn’t be where I’m at today without Brett’s guidance, mentoring and friendship. This wonderful organization we know as Big Brothers /Big Sisters paired the two of us together but I know that a greater power was involved. I am so very thankful to have had a great man – Brett come into my life to be there to help me along the bumpy road of growing up.”

Big Brothers has expanded its programs since Brett first joined.  To learn more about these programs, and the organization as a whole, visit them online at www.windsor.bigbrothersbigsisters.ca.             And if you ever wonder if there is a need, remember, the list is always there.