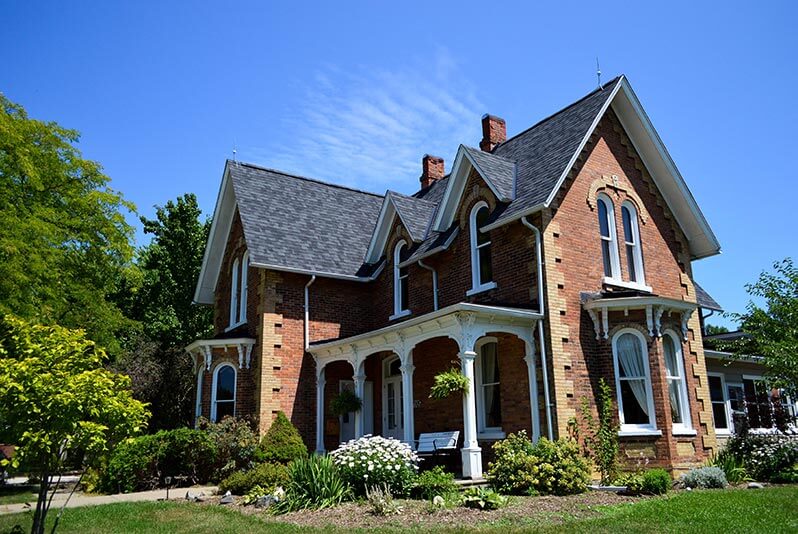 Every Saturday and Sunday morning just before 8am, a long lineup of people begins to form at the corner of Highway 77 and County Road 46 in the quiet town of Comber.

If you’re not familiar with the area, you might wonder what they’re all waiting for; but once you see what’s inside The Iron Kettle Bed & Breakfast, you’ll undoubtedly want to hop in line yourself.

Behind the doors of the beautiful century-old house lies a carb-lovers dream: artisanal breads, gourmet meals, soups, dips, and homemade jam, all courtesy of owner Chef Benjamin LeBlanc-Beaudoin and his talented staff.

“We’ve come a long way from people not knowing what we offer to having a cult following,” laughs LeBlanc-Beaudoin.

At the onset of the Covid-19 pandemic, LeBlanc-Beaudoin and his wife Ginette had to quickly adapt their business model in order to weather the financial storm, suspending their overnight accommodations and shifting their focus to the culinary side of the operation.

“It was all within a matter of a few days that everything happened,” says LeBlanc-Beaudoin, recalling the uncertainty that swirled in March 2020. “The toilet paper rush was crazy, but then there was also a shortage of flour, yeast, and bread.”

Seeing those barren grocery store shelves inspired him to hop in the kitchen.

Prior to the pandemic, LeBlanc-Beaudoin had been baking bread for the B&B’s guests and also offered takeout meals a few times a month through an online ordering system. When the initial lockdown happened, he decided to utilize the ingredients he had on hand to keep a stream of revenue coming in while everything was closed.

“I already kind of had a system and a following in place for that type of thing. We’d post a menu on a Thursday and people would come pick it up,” he explains. “So I thought I’m going to do the same thing and make a meal with the ingredients I have in my fridge and add a loaf of bread to it.”

His first offering sold out and received rave reviews. The next week, he had a request for more meals and an order for over 200 loaves of bread. The rest, as they say, is history.

Now Chef Ben finds himself busy making bread six days a week, available for purchase with his weekly meal orders, as well as at several different markets and businesses across Essex County including Dockside Fisheries, Lee & Maria’s, Raymont’s Berries, Uptown Deli, and The Cheese Bar. He estimates they produce over one thousand loaves each week.

The demand for his artisanal breads is so great, LeBlanc-Beaudoin has also had to convert the entryway of the Iron Kettle into a makeshift “bread boutique”.

The concept came to him as a bit of a fluke; he needed something to do with the extra loaves from his batches.

“So I would have a delivery order for 27 loaves, but my batch makes 30. Instead of trying to adjust my recipe all the time, I’d just bake the extra and put them out on the front porch and post about it online and people would come by and grab them.”

One day after seeing how quickly the loaves disappeared, LeBlanc-Beaudoin purposely made a hundred loaves, set them out on the B&B’s porch and posted about it on social media.

“When I had come back from my deliveries an hour later, there was a lineup of like 50 people and I had zero bread on my porch,” he laughs. “So I thought, ok let’s actually make this a thing.”

Hence, the bread boutique was born, open to the public every Saturday and eventually Sundays to accommodate the high volumes of people.

“There was such a lineup and I didn’t want to turn people away, so we decided to open Sundays as well. There’s less congestion, and it gives people a little more time to browse.”

And there is quite a selection to choose from, including a rotating assortment of focaccia, baguette, brioche, croissants, and Montreal-style bagels.

“It’s evolved quite a bit and our selection has evolved as well,” says Chef Ben. “We’re having a lot of fun with it.”

LeBlanc-Beaudoin credits the success of the bread boutique to people wanting to support locally-owned businesses through the pandemic and avoid the crowded big box stores.

“A product that somebody makes by hand out of their own small business might be two dollars more than what you typically might pay for it, but people know that that two dollars goes to the employees and their families,” he says. “It’s not just going to a big corporation. By me making bread, it allows me to have bread for my family.”

Although LeBlanc-Beaudoin and his wife look forward to the day they can safely reopen the bed & breakfast, he admits that the change of pace has been nice.

While before it was a seasonally intense business that revolved heavily around weddings and events, now he says it’s just “a regular everyday kind of busy.”

“We are busier than we were before, but in a more controlled environment,” says Ben. “I don’t have a calendar anymore; I don’t have a big event or guests checking in, a dinner to cater. Now I just know the days I’m making bread and the days people are picking up meals and that’s how it is.”

There’s another silver lining to the predictability: more quality time as a family.

“Before I would say that I’d take a day off when I didn’t have something going on,” says LeBlanc-Beaudoin. “Now I have a set day that I’m off which is nice.”

“As we all look back on the past year and a half, many people talk about ‘the new normal’ or their new life,” he reflects. “This is my ‘new normal’ and I’m content with that.”

This new normal has also lead to the beginning of a new chapter for the owners of The Iron Kettle; a second location with substantially more kitchen space, retail, and a café/restaurant.

“We’ll call it an expansion,” explains LeBlanc-Beaudoin. “We’ll be moving our food operation out of our current location into this new building.”

With the success of their takeout business, the team has expanded to the point that they’ve outgrown their current cooking facilities. And once the bed & breakfast reopens, they’ll also need a new spot for the bread boutique, which currently occupies the entire main entryway.

“The staircase is filled with bread,” he laughs. “Everywhere is covered in flour!”

As for the new expansion, there was never any question as to where it would be located.

“Of course it could only be in Comber,” Ben laughs. “We have the plans laid out but still many steps to get there.”

Those steps include a complete gutting and renovating of the building, which has been vacant for nearly 30 years and was previously home to a Masonic Lodge and Ainsley’s General Store.

It even has a vault, remnants of the old general store, which pre-dated banks and used to hold money for its customers.

While the back half of the building will be home to an expansive kitchen, LeBlanc-Beaudoin envisions the front half as a welcoming space with a bakery counter, as well as seating for dining.

“We’re hoping to eventually do dinners Friday and Saturday nights,” he says.

LeBlanc-Beaudoin is proud of the advances he and his team continue to make and the commitment they’ve made to following this new path.

“I initially thought; if I’m going to do this (bake bread), I’m not just going to do it just for this week. I’m going to commit to it and build on it and let it lead to something,” he explains. “That’s been a bright spot in all of this knowing that as we develop these recipes and these systems that my team and I are growing and we continue to make great strides.”

And although the world might still be in a state of limbo as we recover from the events of the past year and a half, Chef Ben looks forward to what the future has in store.

“Our goal is to operate our new expansion in our beautiful town in a sustainable fashion,” he says. “We look forward to continuing to give back to our community and educating people about the importance of good food.”

Although all their loyal customers are abuzz about the new space, LeBlanc-Beaudoin says there’s still a ways to go before the vision is finally realized.

“It’s going to be in the near future but no set date just yet. Be patient,” says Ben. “We’re in no rush to get this going because we want to make sure it’s done right.” And those of us who have sampled Ben’s offerings we know the wait will be well worth it.