Breaking down the barriers of a man’s world 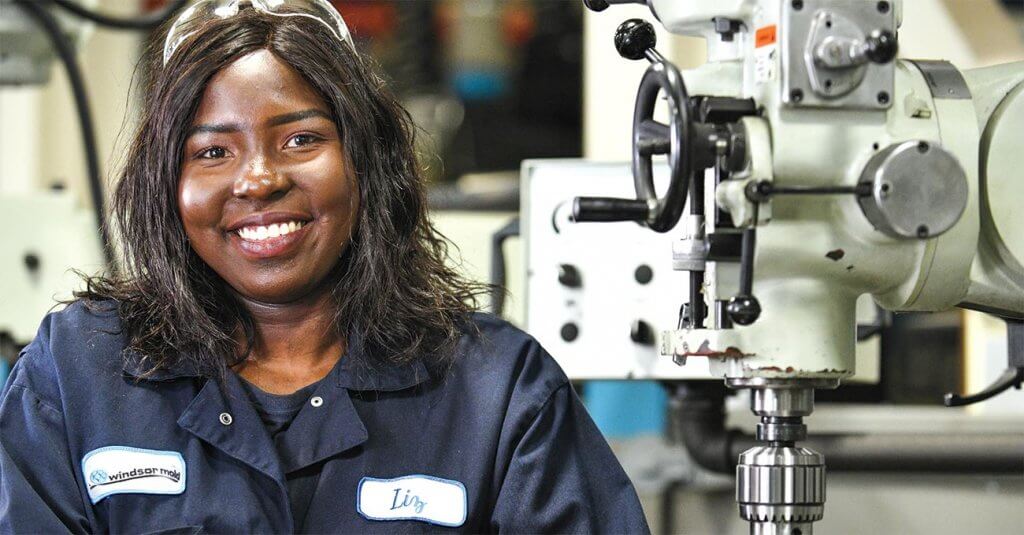 At five years old, Elizabeth Moses became a refugee. Her family, fearing the ever-growing war in Sudan, fled to the safety of Canada. “The war wasn’t ending: my parents had to leave because of it,” explains Moses. “Coming from that area and watching my parents struggle has always taught me to be appreciative of life and to pursue education. I know a lot of children who are not fortunate enough to live in Canada and instead struggle to survive every day.” Moses learned to fight for survival from her parents and, at 22, still carries those lessons with her.

In July, she was laid off from Windsor Mold, a place where she had earned her stripes for three and a half years as a general machinist apprentice. The COVID-19 pandemic had forced a slowdown in production, but she is looking at the bright side—she has her hours in and is looking to receive one of the top credentials a tradesperson can earn. “I’m hoping this year to have the red seal, finally, after all of these years of working in the trades,” she beams. “The trades are hard to work in. It’s a challenging workplace, but, hey, we get through it and we do it because it is for our lives and to better ourselves—so, why not?”

Moses is a mentor, a motivator, and an inspirer of other women who enter the trades. “When I’m not being a machinist, I do several things, actually,” she states. “I do work with Build a Dream and for the past three years, I’ve been speaking on their panels in different cities across Ontario. I work with other organizations, such as WIST. I tutor their students in the Women in Skilled Trades program at St. Clair College. I’ve been doing that since last year.”

Moses is also an ambassador of the Canadian Mental Health Association (CMHA) of Windsor-Essex County. “CMHA is working on a few projects and one is removing the stigma surrounding mental illness in the workplace,” says Moses. “There is no shame in seeking professional help when you are in need. Mental illness impacts our entire community.” She says that since the beginning of the pandemic, the CMHA has seen a spike in anxiety and depression among Windsor-Essex residents and she wants people to remember that the CMHA has a lot of tools and resources that can assist you.

As a teenager, Moses attended Assumption College Catholic High School in Windsor. She initially had zero interest in the trades but was motivated by a teacher. In Grade 9, she was placed in the school’s woodworking class. She says she was shy at first and even tried to switch classes. “‘Why would you want a woman to be in this class or even do this job?’” she had asked. “It’s not something I wanted to do. I didn’t want to be a part of this at all.” She wasn’t comfortable being in a room full of unruly boys, but her teacher, Michael Costello, changed her perspective.

“He really encouraged me and when I started off in the trades, he supported me in that as well,” explains Moses. “I did the class—I did the best that I could—and the teacher invited me to join First Robotics. I went home to think about it and I decided to give it an opportunity. I wanted to see what it was about.” She tried it and its influence stuck with her. For her final three years of high school, she was a First Robotics whiz. The experience inspired her to take up the trades. “I know I have some knowledge of how machines work, I love working with my hands, I might as well do this,” she thought at the time.

As a general machinist apprentice, Moses says she is constantly having to prove herself again and again to her male coworkers in order to earn their respect. “That’s what the trades have taught me—you have to keep trying,” she explains. “If you’re not good at something, keep trying—you’re going to get there one day. It takes time, it takes skill, it takes a lot of knowledge to get [a concept] and build something too.”

Where men can simply take on trades and work their way up, Moses realized women need to work harder, and she knew that everything she did—or didn’t do—would come to represent all women. “I wanted to show the guys that I can do the job as much as they could,” says Moses. “I’m one of the only women who work there. If I don’t do well, it gives [the men] a negative perspective of women, but if I do a great job, they realize that women can do the same jobs as [as the men] and they deserve that respect as well.”

As she continues in the trades, she sees many avenues to follow.  She has an interest in continuing as a women’s advocate for the trades, working on panels to inspire other women, leading a program as a teacher or mentor, or even picking up another red seal or two.

“Encouraging other women, showing that women can do the job—I want to prove my point, I want to get my red seal, I want to complete the journey.”