Annie and Jordan took an old school bus and transformed it into a mobile home for their family of four to take on a yearlong road trip
Author: Alley L. Biniarz
Photographer: Syx Langemann
3 years ago
|
No Comments
Share On 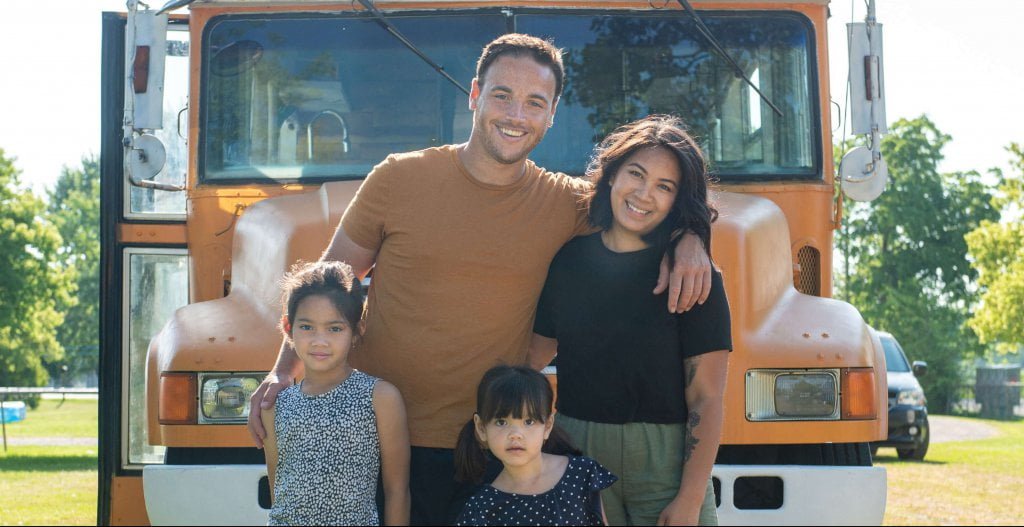 Nobody believed Annie Vanrivong and Jordan Marks when they said they had an unconventional idea for a home.

When they came home with a shell of a school bus that they were going to start renovating, it looked like the two had a long road ahead if they wanted to make the bus liveable during their yearlong travels around the U.S. and Canada—along with their two small children. It wasn’t until Annie and Jordan gutted the bus and started putting up the walls that their friends and family started to take them seriously—it was the push they needed to bring this big idea to life. It took three years of seemingly endless renovations and hiccups, but this July, the family of four was finally ready to take off on their #BusLife adventure of a lifetime. With the entire bus costing them about $25,000, it was an affordable alternative to a home, but it took a tremendous amount of effort on their part.

How it all started

The idea first came about when Jordan and Annie had moved back to Windsor from Saskatchewan with their first daughter, Avairy. “I was a stay-at-home mom for about five years and when we came back and I had to work, Jordan and I were on opposite schedules. We never saw each other or spent time with our daughters,” Annie says as we sit in the heart of the newly finished bus.

Jordan and Annie knew that if they got a mortgage in the current economy, their situation would worsen. At first, they thought about building a Tiny Home, but those run between $70,000 and $150,000 up front. Taking into consideration land ownership or putting the Tiny Home on wheels and needing a truck to pull that, the chances weren’t looking good. The idea of a bus was looking more and more attractive to them, especially because they’d be able to travel around. “If you don’t have a positive financial situation, it’s hard to get on your feet,” Jordan says.

He and Annie had the privilege and support system to back them on their decision. The three of them, plus their new daughter Riley, were able to live with Annie’s parents, and use Jordan’s grandparents’ property to store and work on the bus. If not for them, Annie and Jordan aren’t sure this lifestyle would have been attainable.

There were no step-by-step instructions to follow because each bus layout and roof curve varies, and it’s nearly impossible to find exact measurements. Annie and Jordan would come home after a day of working on the bus and continue researching on their phones through the night to try to school themselves in electrical, plumbing, and design work.

“We were both a little delusional,” Annie laughs. “One summer we worked almost every day until midnight, and I remember feeling so mentally exhausted. The physical work was fine, but it was the planning. The dimensions are weird and rounded and nothing is easy to build on a bus.”

The entire process encouraged them to test their newfound skills and to problem solve, all while keeping their cool and rallying through the situations that felt like a dead end. “There were times where we’d butt heads, especially in this small a space, but I think at the end of it we learned and understood so much more about each other,” Annie says.

Once the bus was finished, Annie and Jordan had people lining up to congratulate them or tell them how inspiring their journey has been. The modern-styled bus is decorated with plants that breathe life into the compact space; it’s enough to tempt anyone to switch over to the Bus Life.

Annie and Jordan have designed the bus to be completely sustainable, with a composting toilet, two 60-gallon tanks for waste and fresh water that they can refill, and solar panels decorating the roof. On top of the environmental benefits, their month-to-month expenses won’t be more than food and gas, since they’ll be parking in free lots or campsites when needed.

Along with the money they’ve saved up, their financial plan is to take Annie’s keychain-stamping business, Wolf and Rebel, on the road and sell her creations at markets throughout their journey. This also gives the family key milestones they can hit along the way, while providing the opportunity for socialization for the parents, as well as for their girls.

“Kids are resilient and make friends so easily. The kids will be more socialized through this than if they stayed in school with the same people every day. They’ll become more cultured and it will help them get out of their shell by talking to new people,” Jordan says. “Socialization is a matter of perspective, and they’ll end up in a routine at some point in their lives, but at least this gives them a contrast to the norm.”

Education on the go

In terms of education for their girls, the curriculum is loose, but Annie and Jordan will be “unschooling them” by using prompts from the world around them, and by fostering the girls’ interests and strengths.

“We’ll be teaching them at a grade above, so they’re not held back when we return,” Annie says about their initial concern. The parents are confident in the girls’ learning skills because they’re already so engaged in reading. Some of their favourite books are from the Little People, Big Dreams series that teach children about famous historians, scientists, and artists like Marie Curie or Frida Kahlo.

Right now, the plan is to make their way out to BC and then cross over into California and Arizona for the winter months. Eventually they’ll go down to Florida and then come back up to do the East Coast in the spring and summer. If their adventures extend beyond one year, they’re open to the challenge.

All fears and uncertainties aside, Annie and Jordan have stamped “Runaway Expedition” on the rear of the bus, ready to take on this new lifestyle.

If you’re located in North America, odds are you may catch a glimpse of Annie and Jordan’s bus on the open road or at a market in your area.

Five Steps to Thriving and Growth

Get out of town without going too far