In what can seem like an increasingly uncivil world, one Lebanese-Canadian jeweler, restaurateur, community leader, and philanthropist is using food as a starting point towards something better. The Drive catches up with one of Canada’s most newsworthy entrepreneurs to discuss putting hummus in hockey arenas, exploding cultural myths, and why the world needs more Canada.
Author: Jesse Ziter
2 years ago
|
No Comments
Share On 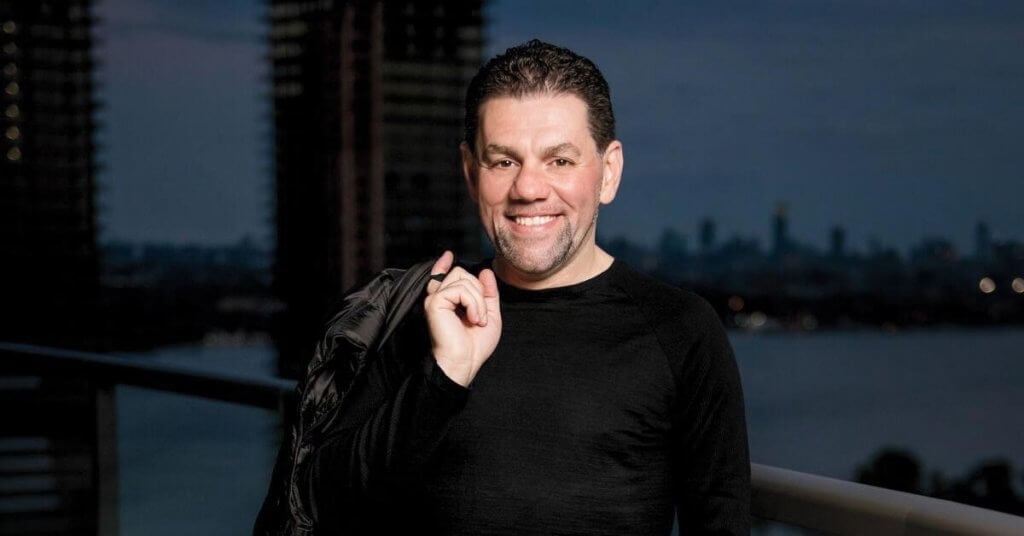 Every season, hundreds of thousands of hockey fans get together in Don Cherry’s hometown to participate in the quintessential Canadian communal experience under a glowing neon sign put there by a Muslim Lebanese jeweler.

Since 2018, the second biggest arena in the Greater Toronto Area, home to Mississauga’s Ontario Hockey League team, has been called the Paramount Fine Foods Centre. The naming rights belong to Mohamad Fakih, one of the world’s leading evangelists for Lebanese food and among Canada’s most noteable emergent philanthropists.

As president of Paramount Fine Foods, Fakih envisions a future where shawarma and hummus are as ubiquitous in the Canadian diet as, say, burgers or bagels. More importantly, he sees a place in even the most overtly Canadian cultural expressions for people who look like him—or indeed like anyone at all.

“To associate a community facility like that with the name of an immigrant who landed here only 20 years ago sends a straight message,” says Fakih, who tells me he cried the day the arena deal was agreed. “The opportunity available to everybody in Canada is unlimited.”

The fastest-growing Middle Eastern food chain in North America—and the only one to establish a foothold in Windsor—Paramount attempts to alloy North American–grade consistency, comfort, and quality standards with one of the world’s great cuisines. Picture the sort of food that tastes great and Instagrams well from overhead: sharable, family-style mezze plates; bright, lemon-lacquered greens sparkled with sumac.

So far, the company has planted its flag in high-demand locations like Toronto Union Station, the Niagara Fallsview Casino, and McGill University. Headquartered in Mississauga, the privately held corporation’s 76 sit-down restaurants, quick-service outlets, and halal butcher shops employ more than 1,500 in Canada, the United States, the United Kingdom, Lebanon, Pakistan, and Côte D’Ivoire.

A self-described “very positive person,” Fakih immigrated to Canada as a refugee in 1999. He had $1,200 to his name. While Fakih’s story might read to a jaded audience as a familiar “bootstrappy” narrative, with him, there’s much more steak than sizzle.

To wit: Fakih has been formally feted for his business and philanthropic work by more organizations than we have space to list here. Perhaps most notably, Fakih is the “face and voice” of the United Nations High Commissioner for Refugees (UNHCR) Canada. In his ambassadorial capacity, he’s hosted conversations with the likes of Malala Yousafzai, the young Nobel laureate female education activist.

Fakih routinely explains in publications like The Globe and Mail and Toronto Life that food can play a role in mitigating cultural and social differences. It’s immediately clear that this is more than a soundbite. In any setting, Fakih is one of those people who seems to radiate positivity.

“My dad used to bring people we didn’t know to join our dinner table at home,” he recalls. “When you start breaking bread with people, they put their agendas aside, and they start talking about their family. To have our food available to all Canadians is another way to take away borders.”

Born in 1971, Fakih grew up in Beirut during the 15-year Lebanese Civil War. His rise to prominence, told in greater detail elsewhere, reads like a superhero origin narrative.

After a brief spell in Damascus, Syria, as a teenaged student, Fakih studied gemology in Padua, Italy. He returned to Beirut and experienced some success in the jewelry business, but eventually took a chance to pursue a Canadian visa in search of a more stable future.

Fakih’s early years in the country were difficult. He worked at Tim Hortons for five days. He taught French to the landlord’s daughter in exchange for rent. He pestered an Eaton Centre jeweler for a chance at a job, eventually offered to work for free. He spent a great many hours on the TTC, and not many at all in bed. Then he found some success selling watches in GTA shopping centres.

In 2006, Fakih’s wife, Hanan, sent him to pick up some baklava for entertaining guests. He found a “mom-and-pop” Lebanese spot near Dixie and Eglinton called “Paramount,” but the restaurant was poorly decorated and in rough shape. A patron recognized Fakih, then en route to becoming a prominent businessman, which led to the restaurant owner asking him for a loan. The business was struggling, and his employees’ visas were tied to its continued operation.

Before the week was over, Revenue Canada had frozen the bakery owner’s account; Fakih’s investment had essentially disappeared into the ether. The owner, admitting defeat, offered to sell his restaurant equipment to help recover the money. Instead, Fakih decided to assume control of the business.

Fakih claims he can’t fry an egg and didn’t know anything about food, but he knew customer service. In relatively short order, Fakih more than quadrupled the eatery’s sales. After two years Fakih opened a second, internally financed location in Thornhill. Before long, the company had committed to a flagship Yonge and Dundas location, which came with an eyewatering $40,000-a-month rent bill.

Today, as CEO of a global food service concern, Fakih is best known as a humanitarian.

He attracted national headlines in October when he offered a public show of support for Soufi’s, a Queen Street West Syrian restaurant forced to shutter after its owners received a barrage of racist, politically motivated threats.

In January 2017, when a white supremacist gunman killed six and wounded nearly 20 others in a mass shooting at the Islamic Cultural Centre of Quebec, Fakih contributed tens of thousands of dollars to cover funeral expenses and building repairs.

Fakih also supports several efforts benefitting unhoused families. In December 2017, during an historic cold snap, Fakih helped place dozens of homeless Torontonians in hotel rooms. At one point, he organized an effort to raise $125,000 in less than a day for the families displaced by a catastrophic fire in a Toronto highrise.

Currently, his major philanthropic project is the Canada Strong Campaign, a fundraising initiative that aids the victims of Ukranian Airlines Flight 752. At press time, the campaign was about three-quarters of the way to its $1.5 million goal. Fakih has promised to contribute $30,000 of his own money and pay for any administrative expenses, ensuring that all donations reach directly the families of victims to pay for funerals and other expenses associated with the tragedy.

As Fakih and Paramount’s community-first corporate ethos has garnered more column inches, the company has logged record sales and found unprecedented success attracting and retaining high-demand employees. While Paramount was built by immigrants, it is sustained by a diverse, multicultural team, including many who didn’t grow up with kebeh and grape leaves on the family table.

“I think CEOs need to change the way they look at business,” says Fakih. “My franchisees used to complain about me donating to the community over putting my face or Paramount’s logo on a bus going down the street,” Fakih continues. “But paying it forward is not only a feel-good thing to do. It’s the profitable thing to do. It’s been proven that customers will support more often a restaurant, or a company, or a product, where they know that the culture and philosophy of the brand is to help others in need in the community.”

To this end, during the Syrian refugee crisis of 2015, Fakih worked directly with the Government of Canada to hire more than 150 refugees into his restaurant empire. Today, some members of that hiring class are restaurant managers or executives within the company.

“There is no reason for not helping refugees,” says Fakih, who brushes aside the common misperception that hiring refugees represents a security risk. “They don’t need a handout; they need a hand up to support them. Refugees will never come to a country looking for a peaceful life and create trouble there. The people who are with us have grown in the business, but even the people who didn’t stay with us, we provided with them their first job experience in Canada. It prepared them for the next opportunity in their life.”

While Fakih was pleased with the Canadian government’s response to the situation in Syria, he cites it as a perfect example of how the private sector can often provide a more agile response to humanitarian crises. “Leaders, in general, are not people who look for excuses,” he explains. “CEOs, business leaders, and government and political leaders need to understand that governments are bureaucratic. They have budgets and elections and they’re worried about optics.”

Fakih makes his home in Mississauga—the heart of Ford country—with his wife and three sons, Adam, Karim, and Emad.

“Lately we’re seeing bigotry and hatefulness becoming bolder,” he acknowledges, “but we must maintain the Canadian dream for the people who are coming after us. We want our children to see the best version of Canada. The world needs more Canada, and it needs us to fight against the change driven by a very small percentage of Canadians who are possibly seeing what’s happening south of the border and becoming bolder because of that.

“We have to stand up against hate, all of us. Otherwise, our silence will be like a wink, telling those people that they can do more.”

To Fakih’s mind, the Canadian dream is more alive even now than many of us realize.

“The American dream is the picket fence separating people from each other,” he explains, “but the Canadian dream is for us all. I think we have a much better dream, to be honest. Canada is not the same Canada as in the old days, and I think that’s good news.”