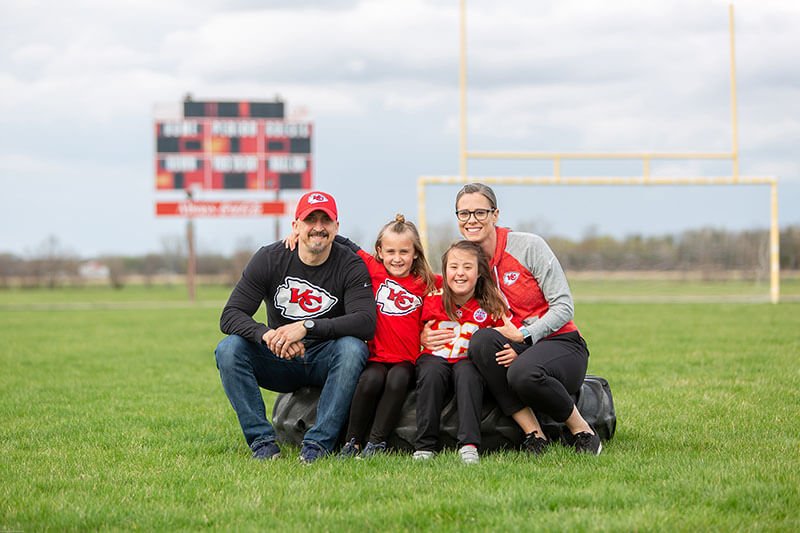 Local mom, Stephanie Seguin, thought she had been Punk’d when she found out that she’d been nominated for, and later won, NFL Canada’s Fan of the Year Contest for 2021. It wasn’t until the money showed up in her account that it actually hit her.

Stephanie was nominated by her friend Jen Williams for the work she does with The Chasing Hazel Foundation, an organization rooted in inclusivity, acceptance, and creating a better world for individuals with Down syndrome.

“I was pumped to have the chance to speak to a larger audience about the work we do,” Seguin explains her interview process with NFL Network’s Nate Burleson, which was when they narrowed the nominees down and finally announcing her as the winner. “When they told me that the money was for our work and the emotional labour that goes into it, I didn’t know what to do. Money isn’t the reason we do this,” she adds.

The driving force for Steph and her husband Matt has never been money. The backbone of The Chasing Hazel Foundation has always been the many people who make it possible. It’s their community, and their collective passion for creating a more accepting world, that gets Steph and Matt going in the morning. Their mission has always been rooted in community – even long before the foundation was established. The spark was lit by a baby named Hazel and spread to a group of people who instantly fell in love with her story.

Chasing Hazel began as a blog that Matt encouraged Steph to start post-partum when their daughter Hazel was born with Down syndrome. They wanted to keep friends and family in the loop with their busy lives, all things Hazel, and the realities of parenthood – especially the realities of raising a child with exceptionalities. “Hazel was already this little magnet. This was when our community started,” Steph says about the blog taking off and suddenly attracting the attention of those outside of their immediate bubble.

Eventually, the blog reached professors of the Early Childhood Education (ECE) program at St. Clair College, who wanted Stephanie to come in and speak to future ECE workers. This was the perfect first step into advocacy for Steph, because she knew the work of inclusivity and acceptance had to stretch beyond their home. She wanted to empower education workers with the resources, wording, and approaches to reflect into their classrooms and to their students.

“This was the ideal audience – future educators – listening to me talk. I thought, Hazel could be in their class one day. Many times, you don’t get the full picture of what a person’s life looks like when they live with a disability,” Steph explains the significance of this opportunity, which was followed by many more, and very quickly turned into speaking in even larger spaces.

“The internet paints such an ugly picture of people with Down syndrome and other disabilities, and I wanted people to see that Hazel does the same things as everyone else, and you’d miss that if you didn’t have a front row seat to her life. She’s a sister, a cousin, a granddaughter; she’s not just a diagnosis.”

Fast forward nine years, Steph and Matt, along with their daughters Hazel and Nola, still focus on community outreach and public speaking in order to help others add value to their own spaces. Though now, as a registered charity, they also raise funds to help fill in the gaps for services, like speech pathology, for those who have outgrown government funding.

When it comes to community outreach, there is always learning to be done, and that goes for Steph and Matt. Being a part of, and more importantly, listening to members in the Down syndrome community, is where they learned to evolve their own advocacy. Steph says that as an able-bodied, neurotypical person, she wanted to know how she could advocate without causing harm to the community, or to her daughter. She learned that she didn’t have to be an expert, she just had to be willing to get uncomfortable, let go of biases, and do the work of re-learning.

“I’ve been uncomfortable, and I don’t always like it, but there’s also always been respect and growth at the end. If we’re always comfortable, there will never be change.”

This is what motivated Steph to look around her own spaces and help make them more inclusive. “We have a responsibility to advocate for more inclusive spaces,” she says, having approached her All-Levels CrossFit gym about expanding the Adaptive Athlete program. This would create the space for those with disabilities to enter the gym community, as well as, the competitive side of CrossFit – and not in a separate division or category or class  – but to workout and compete alongside everyone.

“We weren’t after participation medals…no ‘great jobs.’ We wanted to fairly include all individuals within the gym environment,” Steph explains. The addition of the Adaptive Athlete categories for the “CrossFit Open” not only led the opportunity for further advocacy in the CrossFit world, but resulted in one of the girls at their gym, Julia Lane, placing first worldwide in her category, Iesha Ellwood placing 8th, Adam Fase placing 13th, and Jaden Youssef placing 24th on the worldwide leader board.

“It takes a village, and many community partners, to make these things happen. We don’t have to make changes or learn alone,” Steph says. “That’s always the scary part; we open our doors and think that we need to have all of the answers, but there are other people who can help.”

This is one of the main missions of The Chasing Hazel Foundation: to empower others to change their own spaces. Steph couldn’t bear the thought of Hazel – or anyone else – coming into a space like the gym, walking through its doors, and not being welcome.

“And that’s what this work is about. We need people to brighten the spaces that they’re in. People need to understand that they have the power to bring up the conversation. We need others to look around and ask who’s missing in their spaces. Which voices are being left out?”

Steph says that a person is always worthy of a space – whether that’s a place in the classroom or a position on the soccer team – and we need to make sure there aren’t obstacles or separateness tied to this invitation.

“We need to provide supports and accommodations for people to be as successful as they can be within that space. The goal shouldn’t be about changing people with disabilities or for them to fit in; they’ve adapted and adjusted to our world for too long, it’s time for the rest of us to shift.”

Her advocacy has changed so much throughout the nine years, but the current lesson for Steph is that we need to accept people as they are in the moment that they come. “I don’t look at you as, ‘you’re great, but only because you’ll be a certain way in the end.’ No! You’re welcome here just as you are. You’re enough as you are.”

Steph wants to remind everyone that it’s okay to make mistakes, and it’s okay to say that you spoke too soon while learning, as long as we’re willing to seek out help, break down our personal biases, and then do better next time. Find your local community shakers, educators, and influencers and learn from them. Be sure to listen to a variety of voices, ask for permission to enter a space, and approach with kindness and empathy, always.