More than three decades of family history and pride go into every project
Author: Matt St. Amand
Photographer: Trevor Booth
1 year ago
|
No Comments
Share On 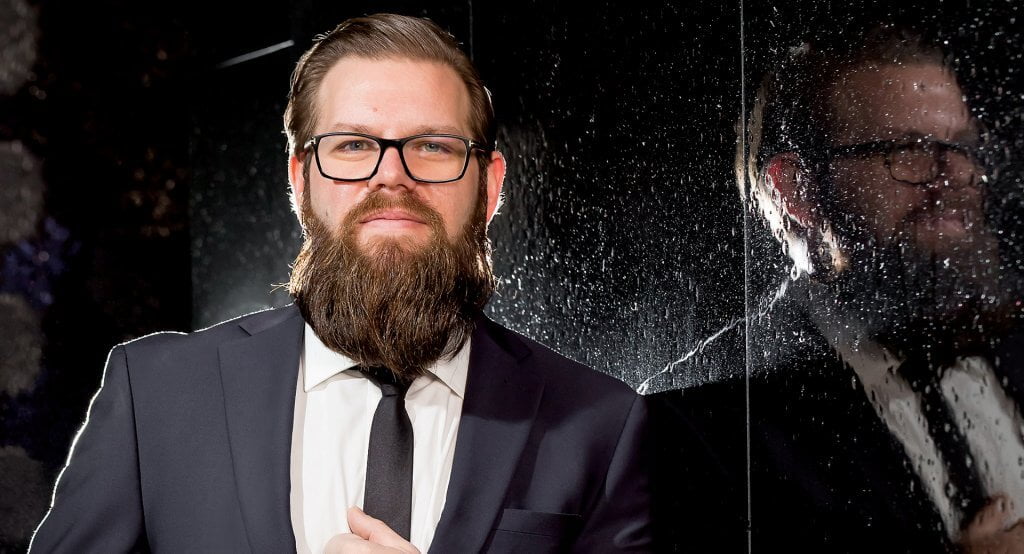 The first Bayview Glass windowpane was installed in 1987.

It was a lifetime ago, but even at that early time, Al LaMarre was an experienced glazier.

“Before Bayview Glass, my dad worked in Toronto, and was a union glazier for a local glass company,” says Eric LaMarre, owner-operator of Bayview Glass.

Al was known for his solid work ethic. He was task-driven and didn’t feel a job was done until the job was done.

“After working his way into an estimator position, he came to a point where he felt stuck in his career,” Eric continues. “Doing ‘okay’ wasn’t good enough for him. He always needed a new challenge.”

The challenge Al sought was as obvious as the world beyond the office window: it was time for him to start his own company. 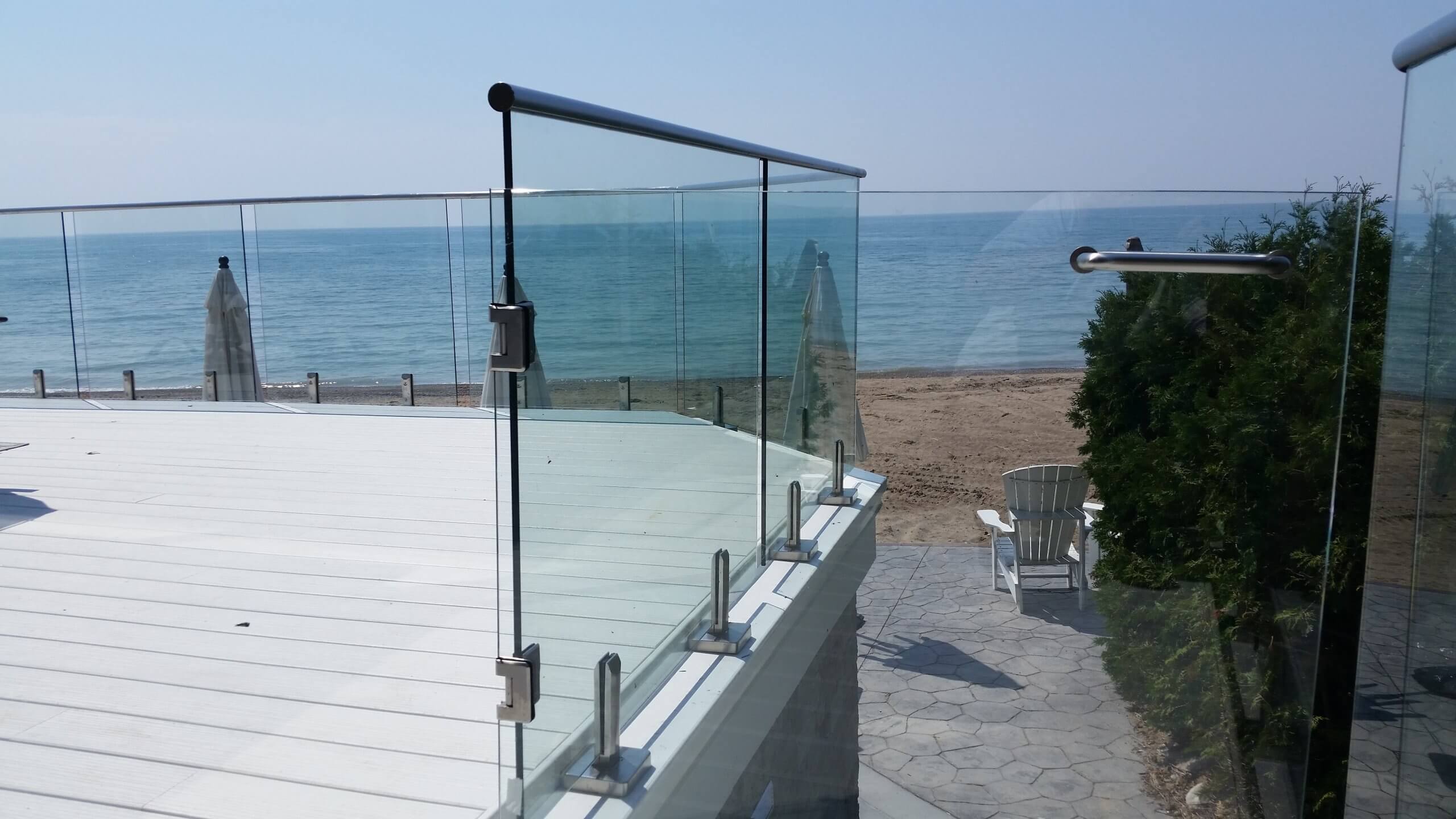 Grateful for the experience he had gained from his former employer, Al went his own way.

There was no sense trying to compete with the company he’d just left—one man against a decades-old business, with a list of customers that stretched a city block, was a non-starter.

What can I do that they don’t do, Al thought.

Today, it’s difficult to recall a time when residential glass was new and innovative. But in 1987, it was. And Al was an idea man who had a gift for creating niche services.

“He started with a truck and a storage unit at St. Rose and Lauzon,” Eric states. “The original Bayview logo was a little dock and waves with two little lights—that was the view from the storage unit. A view of the bay: St. Rose Beach.”

Al’s father, a school principal, was particularly pleased with the name. Those were the days when the Yellow Pages were king and a company with a name starting with “B” put it near the front of the listings. Al even paid Bell Canada for a custom business telephone number: 94GLASS.

It wasn’t long before word of Al’s work circulated among homeowners. In a slow, steady progression, Al went from project to project, and eventually hired a helper. “The first Bayview Glass shop was on Lauzon Road,” Eric explains. “And he opened a showroom on Wyandotte and Reedmere.”  As Bayview Glass grew, so did its need for space. Finally, Al moved to the company’s current location on Matthew Brady in the east end.

Movies and TV shows give a skewed vision of what it’s like being the “boss’ son.” 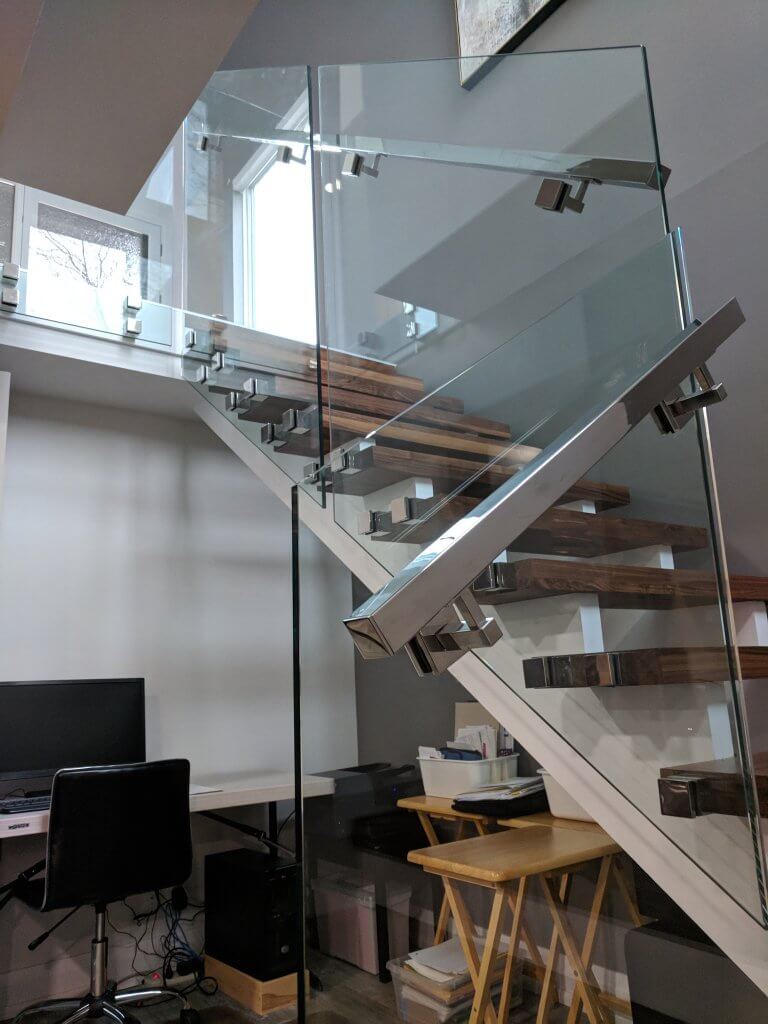 “I grew up around glass and glazing,” Eric says. “I’ve worked at Bayview Glass since I was a kid. If there was a terrible job, I did it: sweeping, picking up garbage, painting the building.” Eventually, Eric went on jobs doing installs.

Although Al was a hands-on guy, he encouraged Eric to pursue his education in Mechanical Engineering. After graduation, Eric worked for a time in the sheet-metal industry. There came a point, however, where he experienced inspiration similar to what his father had experienced when he’d worked as an estimator: “If I’m going to work for someone, it may as well be for myself.”

Eric went to work at Bayview Glass, but was not hailed as a returning prodigal son, with a plush office, company car, and expense account. “You start at the beginning,” Al declared.

Eric joined the install team and began learning the business from the ground up.

In 1990, Al had an epiphany that took Bayview Glass to the next level. While attending a trade show in Toronto, he glimpsed what was called a “Euro-style shower”: an all-glass, frameless shower.

I’m going to figure out how to do this, Al thought, and he did.

As with all new things, customers had to come around to the brilliance of the idea. When Bayview Glass first began installing Euro-style showers, they were doing one or two a day. With each install, their technique improved. The number of installs slowly increased, and they perfected the process. “Today, we install five Euro-style showers a day,” Eric says.

If Al was short on challenges when he’d had a desk job, he now had a talent for finding them for Bayview Glass.

The next great leap for the company was a massive job with Casino Windsor in 1994. It was one of those “careful what you wish for” moments.

“We did all the showers for both casinos,” Eric explains. “At the time, Bayview Glass had five employees. It was a massive job, but my dad thought we could do it.”

“I’d be lying if I said there wasn’t a certain amount of panic about how we’d actually get the job done,” Eric confesses all these years later. “It was make-or-break time.” Ultimately, Bayview Glass came through, completing the job on time and under budget.

“That opened the floodgates,” Eric says. “We were definitely operating on the next level after that.” This led to work with Casino Rama, MGM, and Greektown casinos in Detroit. As the years progressed, and as the jobs increased and grew in scope and complexity, Eric took the lead in finding new avenues for design.

This took the form of all-glass railings.

“My dad was hesitant,” Eric admits, “but with my mechanical engineering background, I’m good at setting up angles and shapes. We were the only company in the city that could handle all-glass railings. There were a few times where competitors hired us to come in and fix railings for them. We set the market.”

In a nutshell: all-glass railings are very complicated. “It’s easy to screw them up,” Eric says. “You have to be very accurate.”

Aside from pinpoint accuracy, the challenges converge: understanding what the customer wants the end product to look like, getting the geometry right, and achieving all of this within Ontario’s building codes.

“Ontario has the strictest building codes anywhere,” Eric says. “I like the challenge of doing the best design and making the end product look amazing. If it’s not perfect, we take it out and do it again. I’ve had near-mutinies about this with my crew, but I never settle. I hold myself to the same standards I set for them.”

The torch of Bayview Glass was passed from Al to Eric four years ago. Al approached the idea of selling the company to Eric as he did every job: with cautious calculation.

“Ten years ago, I took on a larger role in running the business,” Eric explains. “I purchased the company four years ago, but ran it for two years before that.”

When Eric first took over, the company fluctuated between seven and 11 full-time employees. Today, it has more than doubled that to 25. 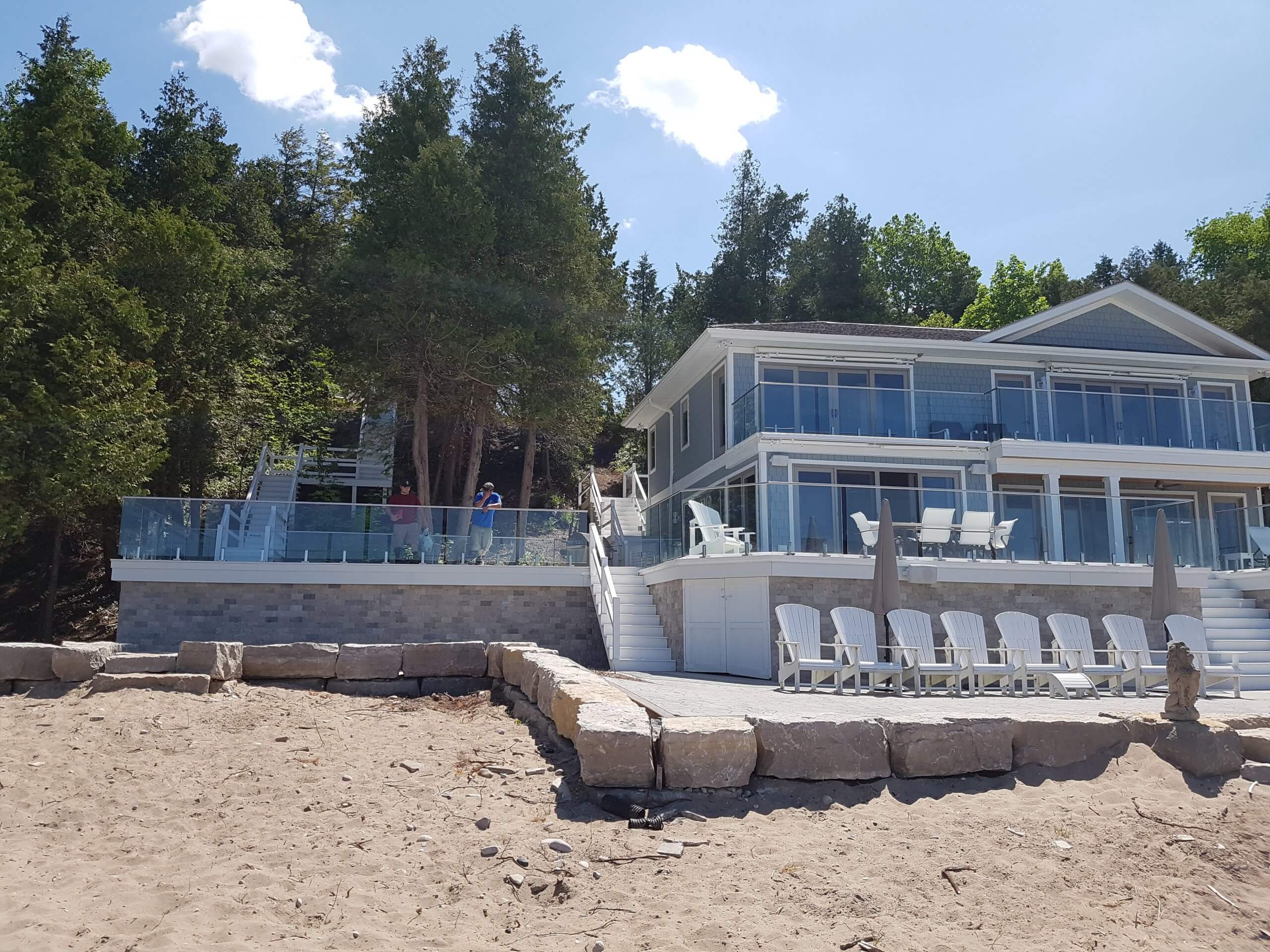 Today, Eric’s is the guiding vision of Bayview Glass. After all these years in the industry, what keeps it interesting for him?

“Always staying up on the latest technology and trends,” he says. “We’re always evolving. We now have two divisions, commercial and residential, and two crews of six working in each. The jobs continue to be interesting, doing whole houses, installing floor-to-ceiling curtain walls, for instance.”

During the week of this interview, Eric was in Sarnia for a colossal skylight project at Bluewater Health.

“Can’t let the crew have all the fun,” Eric jokes. “I still like to get in there and do the work.” In its continuous pursuit of keeping pace with technology, Bayview Glass is a registered dealer of Diamon-Fusion.

“This is a game changer. It’s a good value-add for a decent price,” Eric says.

In layman’s terms, Diamon-Fusion is a coating for glass surfaces that people want to keep clean, but don’t want to actually clean. This is not simply a spray-on solution. Trainers from Diamon-Fusion had to come down and teach Eric and his team how to apply it to glass.

“This helped us get the job doing all the showers for the Harborview condo project,” Eric says.

The end results of Bayview Glass jobs are truly astounding. More people than ever are building with glass. Among the notable projects Bayview Glass has completed, Eric and his crew constructed massive glass bi-fold doors, opening almost 30 feet of frontage on an Essex County property.

“We have done homes with commercial glazing and glass,” Eric continues. “We can go big for homes. We worked at one residence for six months. Did the whole house, inside and out: glass walls, glass railings, backsplashes, tables, counters, showers. If it’s designed right, the option isn’t as expensive as people might think.”

Bayview also recently replaced the windows and doors on all 16 floors of Le Goyeau Condominiums. This was a herculean project that completely changed the configuration of the windows, not only increasing energy efficiency but transforming the waterfront view with new floor-to-ceiling windows accenting the waterfront panorama.

One product that is proving to be a favourite among customers is Starphire glass for custom back-painted projects.

All-glass wine rooms are another current trend. The largest panes of glass Eric and his crew have worked with were 8 x 14 feet, each weighing in at 650 lbs.

Sometimes, Eric’s skill for innovation is pulled in unforeseen directions. When the COVID-19 global pandemic hit, Bayview Glass switched gears and got into the Lexan partition business.

“We designed and built protective partitions for numerous businesses in Windsor,” Eric says. “We did the casino, both hospitals, St. Clair College, a few dozen dentist offices, all branches of WFCU.”

One particularly clever partition was designed and built for Kinetic Konnection.

“We put a partition on wheels that went between the customer and employee,” Eric explains. “We cut an opening at the bottom for the customer’s foot to fit through.”

It kept 75 percent of Bayview Glass staff working at a time when many companies saw business drop due to the lockdown.

“We went through two thousand sheets of Lexan,” Eric says.

Even with decades in the industry, Eric continues to enjoy the challenges that come with new projects.

“I get myself into some hairy situations, occasionally,” he says, laughing, “and people just shake their heads. We’ve yet to run into one that I couldn’t figure out. Sometimes they take many long hours, or I’ll wake in the middle of the night, thinking, That’s how I’ll do it! That’s how it is—the customer says, ‘This is what I want,’ and we make it happen.”

No matter how absorbed Eric is with the business, he never forgets where he came from. Bayview Glass supports many local charities.

“We are huge supporters of Riverside Minor baseball,” he says. “We donated $5,000 to support the hospital.”

It’s an unfair question to ask someone to sum up in a few words all they have learned from trusted teachers and memorable mentors, but Eric seemed up to the task.

“Bayview Glass is about honouring commitments,” he says. “If you promise something, you’d better deliver. You’re only as good as your word.” 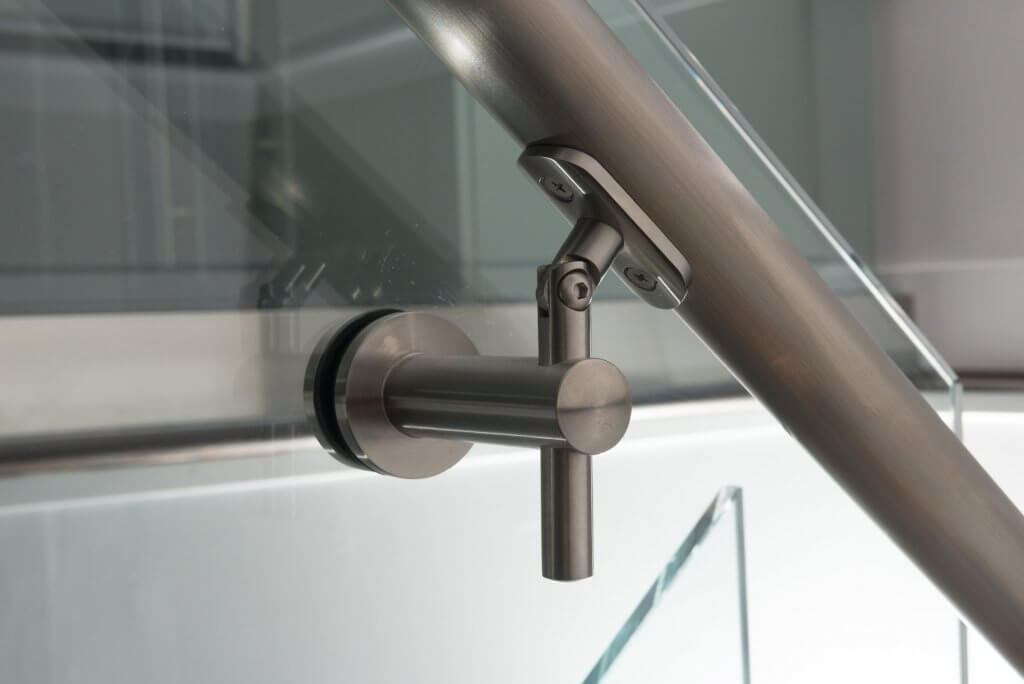 Life isn’t about the destination, it’s about the journey