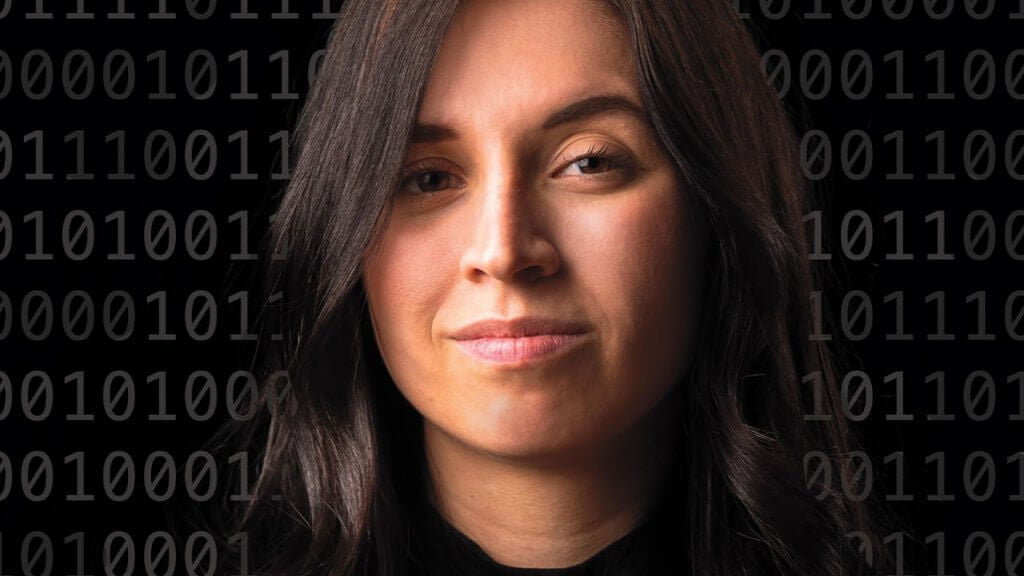 Selina Gabriele describes her seven-year-old nephew, Tanner, as energetic, outgoing, and extroverted. “He really enjoys connecting with people and spending time with his family” says Gabriele. “My brother has a Rottweiler, and the dog and Tanner love playing together.” As Gabriele—a 24-year-old computer science graduate from the University of Windsor—tells me more about Tanner, I learn that he is one of the key inspirations behind her company AidaNote

AidaNote is a speech-to-text transcription tool that allows classroom lectures to be transcribed on a screen in real time. Imagine Netflix with the subtitles turned on but for live events instead of pre-recorded footage. While this sort of technology isn’t new, and we see it in products like iPhone’s speech-to-text messaging, Gabriele’s approach to implementing it for real-time lectures is an innovation that could change classroom learning for the better. This product could help all students take better notes in class, but it is especially valuable to those who need unique accommodations in the classroom

“Tanner was born deaf,” Gabriele explains. “His grandma is his primary caregiver, and she’s worried about how schools are going to be able to accommodate for that and give him all the opportunities he should have.”

With Tanner in mind, along with identifying her own struggles with taking good notes in class, Gabriele came up with a minimum viable product in just three days at the University of Waterloo in 2017 at Canada’s largest hackathon—Hack the North, where a thousand students are given 36 hours to create a unique computer-based project from scratch. The idea for speech-to-text came from a subproject sponsored by IBM that encouraged Hack the North attendees to create a tool using IBM’s speech-to-text application programming interface

Gabriele didn’t win the competition, and though it would’ve been easy to give up on the product after losing the challenge, she decided to push forward with the idea. She quickly had interest from the University of Windsor’s Student Accessibility Services, who saw the value in what she was creating. Before deciding to invest more time in creating the product, she recalls making a list of reasons in her head of why her idea could fail but says, “I realized I have plenty of time to fail at things at this point in my life. If I try and I fail, at least I won’t regret not trying at all.”

With that in mind, in early 2018, Gabriele decided to create Edulux—a precursor to AidaNote. She spent a majority of the year perfecting the business model, while figuring out how to get this sort of technology off the ground and adopted at universities across the province. Over the course of the year, Gabriele faced many challenges—from losing a co-founder to rebranding the company from Edulux to AidaNote to practising business pitches last-minute due to time and resource constraints. She, however, never lost sight of the big picture of making classroom learning accessible to everyone. In the fall of 2018, Gabriele brought on Stevan Ljuljdurovic as Chief Technology Officer at AidaNote. He took over project management and hired freelance programmers to develop the tool

Gabriele knew the path to entrepreneurship would be far from straightforward. But despite the setbacks, she has seen much success in the last year due to persistence and hard work. The company managed to raise a total of $27,000 by the end of 2018. The goal for the first half of 2019 is to test the product they’ve developed in focus groups. Later in the year, the team hopes to begin implementing this technology in University of Windsor classrooms and to collect feedback before scaling province-wide

Her advice to founders considering entrepreneurship but hesitating to make the move is to simply go for it. “If it feels right, then listen to your gut about that. Take calculated risks and have the confidence in what you’re working on. It’s a personal journey and everyone’s is a little bit different,” she says. She mentions that it was best for her to dive in headfirst instead of tentatively dipping her toes into the waters of entrepreneurship.

Though Gabriele initially invested full-time hours to get AidaNote off the ground, she is currently on the project part-time while working full-time as a consultant. If the focus groups and tests are successful, and they are able to implement this at more universities, Gabriele plans to come back to the team full time. “It’s hard to think about next steps too far in advance given the uncertainty of the project, but I’d love to work on it full-time again,” she says. “I really want to level the playing field when it comes to classroom learning.”