The Art of Demand and Design
Author: Suzy Kendrick
4 years ago
|
No Comments
Share On 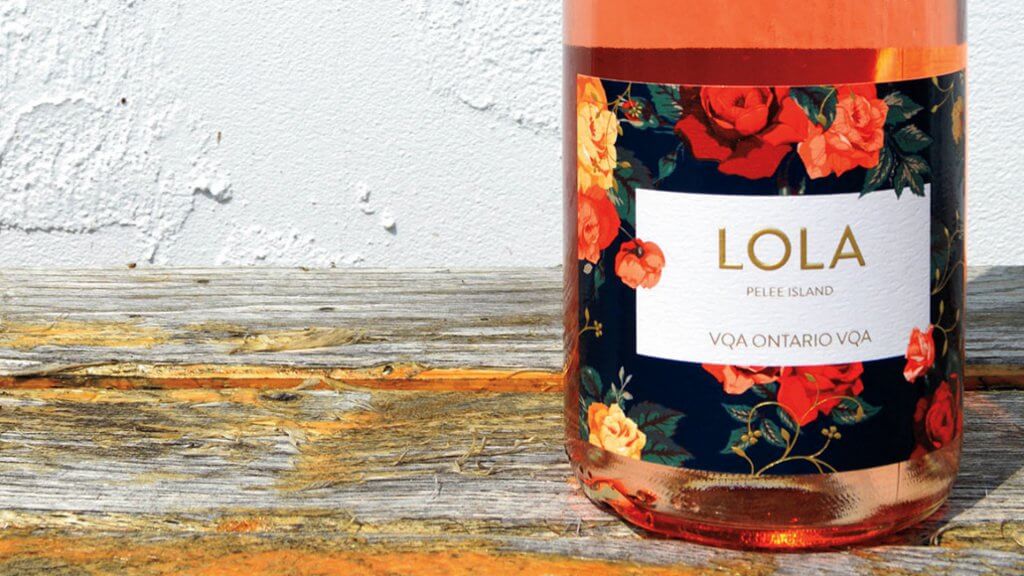 One may think the story of how Pelee Island Winery’s LOLA Rosé Sparkling came to be would be whipped in whimsy; an idea that had to have been conceived in the same way drinking a bottle of the perfect bubbly feels—magical and refreshing.

In reality, it is more a testimonial to the high level of business acumen under which Pelee Island Winery operates. They’re experts at observing market trends, analyzing an audience and collaborating with the right vendors, then trusting the taste to the experienced talents of winemakers Tim Charissé and Martin Janz.

The fact of the matter is this: LOLA is the result of making a very educated guess that was wildly successful.

“As a winery, we are unconventional in that we are a house of brands, with each one having a unique story,” says Darryl MacMillan, sales and marketing manager at Pelee Island Winery. “We have 50 different consumer-facing brands with their own identity and DNA. While LOLA felt like a pretty big departure from what we’d done previously, I’m really proud of breaking new ground.”

Between 2012 and 2014, Pelee Island Winery executives identified a trend in the market. The popularity for rosé and sparkling was on the rise in North America, mainly in the Hamptons. It was assumed that many of these residents first tried rosé in Cannes, Nice, St. Tropez or Provence while on lavish European holidays. So, when the light pink–hued drink started to appear in stores on this side of the pond, it was a welcome reunion.

In the summer of 2014, a popular New York Post article proclaimed the high-flouting summer inhabitants of the Hamptons were running dangerously low of “Hamptons Gatorade,” the new local term for rosé.

Pelee Island Winery took this seriously as they began forecasting supply and demand and allocating their 2015 harvest to projects.

“Most things start in the vineyard,” says MacMillan. “In our planning process, we identified we could probably allocate some really dynamite fruit to expand our sparkling wine program.”

And they did just that. That September, Pelee committed to the idea. The first vintage, a combination of 95% vidal (white grape) and 5% chambourcin (red grape), was harvested from the winery’s 550-acre vineyard in the Pelee Island appellation. It’s Canada’s warmest, oldest and most southerly grape-growing region, similar to famous appellations in Spain, France, Italy and California.

“Being lightly sparkling changes the planning process, including how and when you harvest the fruit,” says MacMillan. “You must harvest a few weeks earlier than the regular table wines, so the grapes are underripe.”

The risk here is that they had only one shot. There was no putting the grapes back on the vine to fully ripen for use in other wines. Should this experiment not work, the winery would lose the yield (and the profits) from that fruit.

Considerable investment was also required in order to create the sparkling rosé as there are extra steps involved in its creation. With the traditional “methode champernoise,” the wine undergoes a secondary fermentation right in the bottle. Alternatively, winemakers can create that environment in large Charmat tanks. This is the same process used for prosecco and cava. Pelee purchased two.

Additionally, a special bottle type had to be sourced. It needed to be pressurized, with CO2 enclosed in the bottle, in order to keep LOLA carbonated until it was ready to be enjoyed.

“It’s always fun as a winemaker to create something new and take on a new challenge,” says Tim Charissé, winemaker at Pelee Island Winery.

While the grapes were undergoing processing under the watchful eye of Charissé and team, back at HQ they were heads-down, brainstorming on the branding and creating story boards to help them truly define who LOLA was for.

Ideally, they were going to be targeting young, urban, hip, fashionable females: the Instagram generation. MacMillan says his hope was that these influencers would light the LOLA spark, and then the product would appeal to a broader audience beyond that.

In a pre-Instagram era, most rosé labels were romantic and soft, typical of the pink wines from France. However, in the past five years, another camp of graphic wine labels—a deviation from tradition—has emerged. Pelee designed the branding all with this at top of mind, knowing their Instagram-friendly consumers would be eager to share photos of LOLA’s aesthetic on social media, continuing to drive sales of an already in-demand product. “The LCBO was a collaborator from the idea onward,” says MacMillan. “Once they saw LOLA, they wanted to carry it.”

Purchased as part of a seasonal program for 2016, the LCBO committed to purchasing a modest amount of product as it was anticipated this would be a one-and-done type of program. However, confident in their creation, Pelee had prepared extra inventory, as they really believed they were on to something.

Once LOLA hit store shelves that spring, the LCBO quickly came back and ordered more. At the end of the season, the retailer had committed to three times the amount than they initially ordered.

“Everywhere we brought LOLA, we sold out,” says MacMillan. “At wine festivals from Vancouver to Winnipeg, and all over the east coast, we watched as LOLA’s pink hue and unique branding caught people’s eyes from across the room. You could almost see them tasting it before the rosé had even hit their lips.”

LOLA’s long-term plan was formulated very quickly when the Pelee team saw its success. They used the winter months of 2016 to get caught up on production. In Spring 2017, LOLA re-launched as a regularly listed item at the LCBO. By the end of 2017, LOLA was one of the top VQA wines and the top VQA rosé.

“It makes you happy to see people enjoying your wine,” says Charissé. “That’s what you work for.”

In the wild, LOLA has taken on a life of its own, especially on social media where people are lovingly telling their LOLA stories and sharing beautiful photos.

“At some point, you hand your brand over to the people consuming it,” says MacMillan

Subsequent to the success of the sparkling rosé, Pelee has expanded the LOLA line with LOLA Vidal (a gently sparkling white wine), LOLA Gewürztraminer and LOLA Cabernet Franc Rosé (a dry still rosé). The brand new LOLA Cabernet Sauvignon/Cabernet Franc is launching at the LCBO this September/October

Oh, and the name LOLA? That’s something Pelee Island Winery says they are staying tight-lipped about.

Rockin’ with The Blue Stones