Dating in the Time of COVID-19

Here’s how some of us have been getting a little closer in the time of social distancing
Author: Katrina Manzocco
2 years ago
|
No Comments
Share On 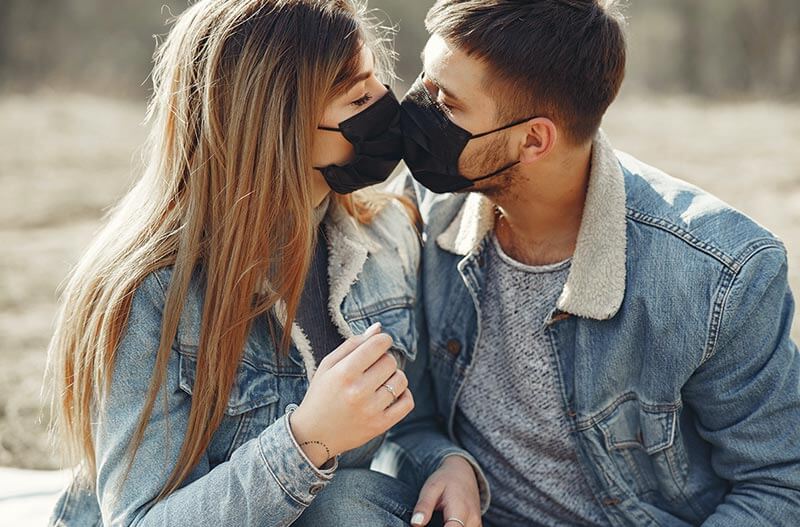 The pandemic that’s shaken our gym routines, social calendars, and our lives in general, certainly hasn’t been mindful of how isolation might harm our dating prospects. Given the measures we’ve all taken to avoid exposure to COVID-19 (read: drive-by birthday celebrations, window-separated visits with grandparents, and delivery drivers dropping their pizzas and fleeing the scene), the notion of new intimacy has become hard to grasp.

But in the sage words of Jurassic Park, “life finds a way”—not even a pandemic could keep us apart. Despite thesocial distance between us, people haven’t really given up on dating—much like all other things in the time of COVID-19, it now just looks a little bit different than it used to.

To learn just how different this looks, I spoke to people from across Canada about what it’s like to date during COVID-19.

Is it harder or easier to find someone now than it was before?

That all depends on who you ask.

“I think it’s harder. Everyone has been isolated for so long that they meet someone new and no one knows how to act. When meeting someone new, I’ve noticed that people would bring their pandemic self,” says James Johnson, a gay Torontonian. “There’s a lot happening and a lot of uncertainty, so everyone’s brain seems to be in overdrive to process it all, myself included.”

In contrast, Fez Hussain in Edmonton feels as though the pandemic has helped his prospects. “Are you kidding? I’ve had more matches on the dating platforms I use than ever before. Nobody else has had anything to do in lockdown, so there’s been way more traffic than usual, and people are much more willing to chat, even if they don’t live in the area,” he says.

“People’s willingness to connect with someone farther away from them has definitely increased now that nobody is worrying about physical proximity.” Not having anything to do in lockdown, however, doesn’t exactly make for great conversation, according to Rebecca Cole in Calgary. “Despite the fact that so many of us are on dating apps and there’s lots of people to meet,” she says, “I find it harder to find people interesting during COVID because no one is doing anything worth talking about.”

Have you seen anyone in-person since the pandemic started? How did you approach the issue of safety?

The pandemic gives new meaning to the question of ‘are you seeing anyone else?’

“Yes, I would still see people but from six feet apart. I’ve been up-front and honest about my need for safety like I am about anything surrounding my health and wellness,” says Johnson. “Someone who it might not work out with just isn’t worth risking COVID-19 and potentially spreading it. It may force that awkward conversation to happen a bit sooner than anyone is ready for, but if it’s meant to be, it will be.”

However, not everybody has the same feelings about the necessity of distanced dates—Cole shares that her own dating life hasn’t necessarily changed as a result of COVID-19—a surprise given who she’s gone on dates with. “I had been seeing the same two people casually since before the pandemic started. Coincidentally, they’re both first responders [firefighters], and neither seemed concerned about needing to socially distance. As well, neither have asked who else I’m seeing; the issue really hasn’t come up at all!”

Have you gone on any video dates? What has that been like?

Could FaceTime or Skype really replicate the experience of an in-person meet-up? The jury is out.

Hussain is all-in on e-dates, and for good reason. “Personally, it’s been great for me. I’ve had two virtual dates, and both included me ordering myself and my date food through UberEats and having a distanced dinner over FaceTime. We set up the call and chatted while we ate—it was really cute,” he laughs.

“So if anything, it’s easier than a typical date… you don’t need to worry about travel, including parking, or having to drive home if you’ve had a few drinks.”

Understandably, not everybody is thrilled about the shift to remote romance.

“I am Zoomed-out so no more virtual dates,” says Johnson. “I felt like I was interacting with my computer instead of the actual person I’m speaking to, and it’s too easy to miss out on little behavioural cues, which just makes it hard to read the person. Distancing is awkward when you’re trying to get to know someone.”

Is this pandemic going to change dating permanently?

It’s hard to say whether virtual dating is here to stay, but it certainly has made some of us more aware of the subtleties of physical nearness when we get to know someone romantically.

“I feel like many people are still worried about COVID, which is keeping us away from making that true in-person connection. One can talk over the internet or in Zoom meetings, but in-person is where it’s at,” shares Windsor’s Greg Lemay. “I feel like dating for the most part has been put on hold, which has caused folks to become lonely and has impacted their lives in a negative way.”

For some, however, COVID-19 has led to lasting relationships, despite the challenges brought on by the virus. Cole shares that she has encountered this firsthand in her own social circle. “My friend went on a bunch of virtual dates with this guy that she met during stay-at-home orders, and then went on a socially distanced walk and now they are living together… all since April. To say the past months have been weird is an understatement.”

A pandemic love story if there ever was one.

Artisanal Cheeses and the Cheese Bar