“Downtown Believers” Find a Home at The Hive on Pelissier

A vision of the future has just opened its doors in the Windsor core
Author: Matthew St. Amand
1 month ago
|
No Comments
Share On 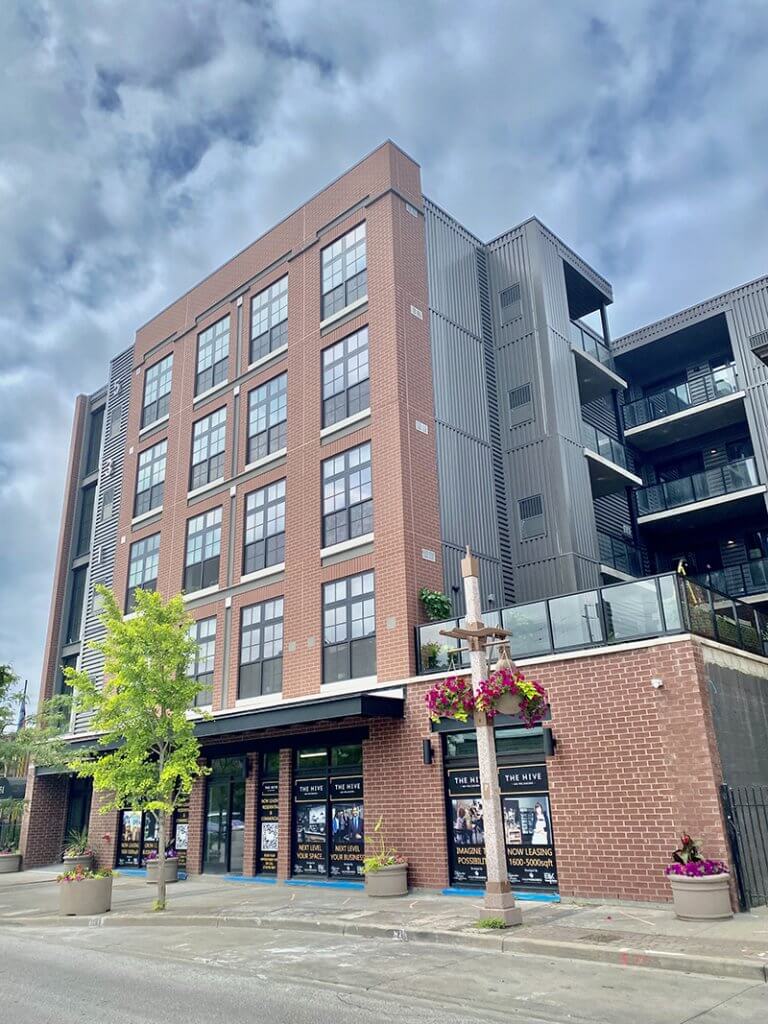 “If you build it, they will come.” So goes the famous line from the movie, Field of Dreams. It also captures what is happening in downtown Windsor.

Located at 531 Pelissier Street, the Hive on Pelissier is a five-story luxury apartment building located in the bustling heart of downtown Windsor. The project is a collaboration between BK Cornerstone Design Build Ltd., Philip Fernandes Custom Residential Design, and Distinctive Homes & Real Estate Ltd. Brokerage. The Hive is a lavishly upscale living space for busy professionals.

“In recent years, we’ve seen Windsor trending upward,” says Brent Klundert from BK Cornerstone Design Build Ltd. “The resurgence of the downtown core area has been amazing—lots of investment and development. Our tenants are a real mix of young professionals and ‘downtown believers’ who are excited to be a part of Windsor’s comeback.”

Amenities abound at the Hive on Pelissier.

“There is a full gym,” Brent continues. “We have a beautiful roof top terrace that overlooks Maiden Lane, complete with a gas-fired table and outdoor barbecue space. Residents are within walking distance of an amazing, eclectic mix of cafes, restaurants, and entertainment downtown, on Maiden Lane and Chatham Street. They’re also just a short tunnel bus ride from Detroit, and all that it offers.”

The Hive on Pelissier is comprised of twenty-four residential units. There are also three commercial units. One is already leased.

Although tenants have begun moving in, the Hive’s official grand opening is set to take place on Thursday June 16, by invitation only. Coinciding with the Downtown Windsor Farmers’ Market the following Saturday June 18, the Hive on Pelissier will be hosting a public open house where all interested parties can book a guided tour.

Speaking about the residential units, Brent says: “The units are definitely upper scale, details are top of the line. There are no units available in Windsor styled like this—for people with discerning taste.”

Indeed, the Hive on Pelissier was designed by Philip Fernandes Custom Residential Design. Philip and Amanda Fernandes have built a reputation on exceptional creative design and understanding the details, pulling together experience from carpentry, construction, as well as formal architectural study. In the case of the Hive, details—right down to the window frames—have received the attention of this premier designer whose worked graces some of the finest homes in the area.

The location of the Hive on Pelissier is significant.

“It’s built on the site of the old Don Cherry’s, which has been vacant since 2004,” Brent explains. “Over the years, the site had become something of an eye-sore, and we thought it would be an excellent location for a project that will change the dynamics of downtown Windsor.”

“We’ve had a great response from those who have viewed the Hive,” says Chris MacLeod of Distinctive Homes & Real Estate Ltd. Brokerage. “The building is already thirty percent leased, and we expect to be fully occupied in the coming months. We are dedicated to providing the finest service available by offering exceptional representation in all aspects of real estate investment and development in Windsor and Essex County.”

Windsor seems to be on everyone’s radar, these days—and for all the right reasons. There is the expansive redevelopment undertaken by St. Clair College at the old Windsor Star building on Ferry Street, the old armory, and elsewhere. There is the revitalization of Chatham Street and Maiden Lane. The Windsor waterfront has been site of one positive development after another, over the years. Windsor is hosting the 2022 CAN-AM Police Fire Games in July. And at the center of all conversation is the plan by Stellantis, LG Energy Solution to build an electric vehicle battery plant in the city.

“And more announcements are to come regarding downtown development,” Brent says. “It’s too early to reveal at this time, but we have acquired more property in the Hive’s general location. The group will unveil its plans for further investment and development in the area very soon.”

The stars are aligning above the City of Windsor. “What’s happening here is all pointing in the right direction,” Brent says. “The core is on its way to becoming the place to live.”             For more information about the Hive on Pelissier, and to stay in the loop for announcements about future developments, visit www.thehiveonpelissier.com