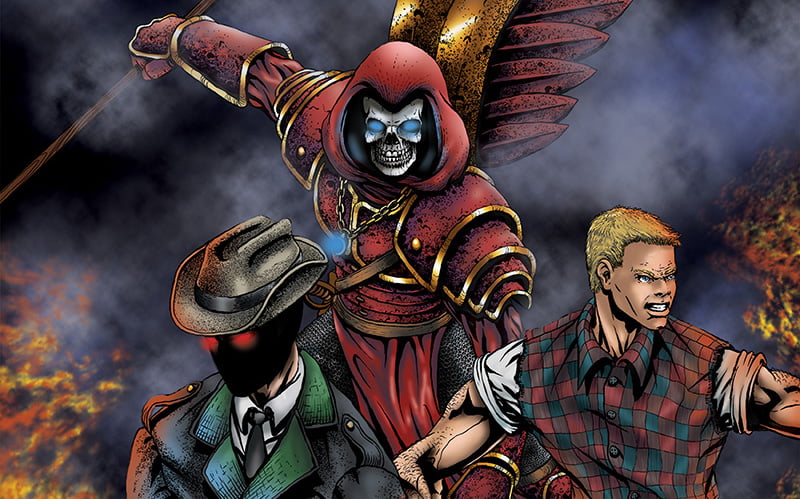 The beauty of art is that it can come from anywhere.

That’s how it is with Dream Reapers, written by George Morneau and illustrated by Keith Ashton: two guys in Windsor with a vision.

A few years before their collaboration, George experienced a spiritual awakening, which was accompanied by an outpouring of creativity. He began painting, writing, seeing the world and his own life differently. From the vortex of this awakening, an idea for his magnum opus was born.

While exhibiting his paintings at an art show, George thought that would be a good place to connect with an illustrator for an idea he had. It would be a comic book. More than a comic book, actually. A series.

“I asked an exhibitor near me if she knew of any illustrators,” George recalls. “She said: ‘There’s one over there.’”

George left his exhibit and went in search of the illustrator, who turned out to be Keith, a talented young artist. He listened to George’s idea for a comic book series.

“I felt a bit of hesitation,” Keith recalls. “I tried projects like that in the past and they didn’t go well. I had enough commission work that I didn’t need to worry about illustrating a comic. When George approached me, there was something different. I thought: ‘Let’s give it another shot.’”

“I am more an orator telling stories,” George explains. “I would tell stories to my kids, at bedtime, when they were little. The next night, they’d say to me: ‘Can you continue last night’s story?’ Often, I couldn’t remember what I had said!”

Those oratory skills came in handy making his pitch to Keith. They agreed to work together and fell into a routine of meeting at a coffee shop to discuss ideas and vision for the story.

“I believe that all people have their own stories,” George continues. “I draw from my childhood—other titles I have ideas for are based on that. Everyone has a demon within that they are battling. For myself, I have battled through stuff. Everyone does.”

Over the course of months—moving into the lockdown period brought on by the COVID-19 global pandemic—George and Keith worked on the story and Dream Reapers took shape.

The story centers on three characters: Conflict, Carl, and Slade. Conflict is one of the Four Horsemen of the Apocalypse. As he and the other Horsemen lay waste to the world, Conflict believes there is still good in humanity, that people can redeem themselves. He breaks away from the other Horsemen, journeys into hell, where Conflict rescues a soul he believes was wrongly condemned to eternal damnation. That soul belongs to Carl, a Michigan state trooper in life. A miscarriage of justice sent him to prison for the deaths of his children in a fire. Carl encounters inmates who knew him as a state trooper, and he incessantly attacked. He finally kills one of his attackers and receives the death penalty. Following his execution, he ends up in hell, where Conflict finds him.

Conflict’s idea for saving the world involves going back in time, invading the dreams of evil people, and bringing about positive change in them. These two otherworldly figures need the help of an earthbound man. That’s where Slade comes in, an ordinary guy with an office job.

“There will be sixteen stories in total for Dream Reapers,” George says, who has written the third installment, which is expected out by the end of 2022.

The artwork in the comics is stunning. The illustrations are reminiscent of album art in that the deeper ones looks into them; the more details reveal themselves.

For instance, at a glance, the cover art for the inaugural issue is striking – Carl, clad in his state trooper’s Stetson and a trench coat. In each hand, he holds a bed in which a sleeping person lies. In the background, countless “easter eggs” are there for anyone willing to look.

The narrative and drawings are an excellent pairing of talents. Keith explains that each issue took him approximately 450 hours to illustrate. The story, itself, begins with a bang—the Apocalypse—and doesn’t slow down from there. Each issue balances action and philosophy, offering interesting explanations for the supernatural happenings.

Ultimately, Dream Reapers is a redemption story. Each character has their own demons, their own desires to battle and strive for. Dream Reapers is available for purchase at Juniper Books, Storytellers Bookstore, as well as Border City Comics, Rogues Gallery Comics, and Paper Heroes, among other outlets. To learn more about the series, check out its Instagram space @KarmicMaliceComics.

Love in the Time of Covid