“Digital dentures” sounds like an oxymoron, but one Windsor professional is helping teach the world’s denturists how to build new smiles using cutting-edge technology
Author: Jesse Ziter
Photographer: Syx Langemann
3 years ago
|
No Comments
Share On 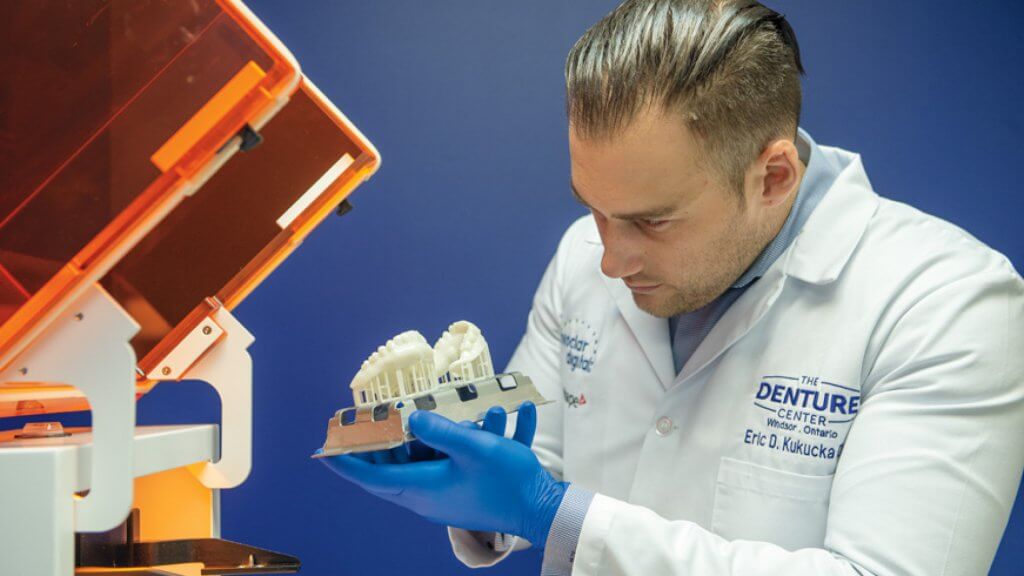 Doug Roberts reckons he’s had more than 100 sets of teeth in his mouth. All but one of them have been Eric Kukucka’s.

Nearly 10 years ago, Roberts, who struggled with an addiction, opened wide and cleanly pulled out one of his chompers while sitting on his living room couch. “No bleeding, no nothing,” he now recalls.

A subcontractor working in construction, Roberts had recently moved to Windsor from Brampton in an attempt to get clean. He knew his oral health situation was a problem. “With no teeth,” he explains, “how are you going to convince people to let you into their house, to build things for them?”

Before long, Roberts had the rest of his front teeth surgically extracted, and his dentist put him in touch with Kukucka (kuh-KOOCH-kuh), then a young denturism student who was training under an established Windsor denturist.

Roberts was a tough case, but Kukucka decided to take it on for free with one condition: The two would travel to Toronto together, and Roberts would volunteer as the test subject for Kukucka’s licensing exam

It worked out. Today, Roberts is still smiling, and Kukucka is president and owner of The Denture Center—a network of denturism clinics in Windsor, Leamington, and Oakville—and a bona fide world leader in his field.

For nearly a decade, Roberts has been hitched to Kukucka’s rising star. He’s volunteered for further studies and participated in a number of live demonstrations

“I call myself a guinea pig,” says Roberts, chuckling, “but he won’t let me say that. I’m his research associate.”

Today, he also considers himself Kukucka’s friend. “He gave me a million-dollar smile,” says Roberts, audibly emotional. “The stuff that boy has pulled off since I’ve met him is beyond belief.”

At 30 years old, Kukucka is a young man in what is ostensibly an old person’s game, but he’s been thinking about false teeth for a long time. As a ninth grader, Kukucka took note of a family friend who was a successful denturist and began to plot out a path to a fluoride-bright professional future

“In high school, I wasn’t the greatest student,” Kukucka admits. “My dad had a heart-to-heart with me and said ‘you’re going to go one way or the other.’ I saw that denturism was the right field, with the geriatric population and baby boomers, and I learned from studying people around me that the first thing you notice when you meet someone for the first time is their smile, regardless of whether they’re 25 or 95.”

In college, Kukucka found himself in the first class to benefit from George Brown’s new relationship with Ivoclar Vidadent, a multinational oral prosthetics company headquartered in Lichtenstein. Located between Austria and Switzerland, this tiny country is a mecca of dental technology.

At one point, the program’s would-be-denturists were bused to the Ivoclar’s American offices in Amherst, New York. There, Kukucka connected with Dr. Frank Lauciello, a key research and development figure at the company. “Frank and I just hit it off, and we kept in contact,” says Kukucka, who now describes him as a mentor.

Six months into his career, Kukucka was surprised to receive a phone call from Lauciello, who invited him back to New York to discuss a line of prosthetic tooth moulds that seemed to have had issues on a global scale except at Kukucka’s practice

“I showed some cases, what I was doing, and how I was doing conference calls with other denturists who were having issues,” says Kukucka.

Soon, he found himself beta testing the next generation of the product. The better part of nine years later, he’s a key consultant for Ivoclar, which means he gets clinical trial access to leading-edge technology before almost anybody else. “We are doing things four years before the rest of the world,” he notes.

Digital dentures eliminate the need for denturists to perform physical alginate impressions of a client’s teeth and gums. The new technology uses sophisticated scanners, 3-D-printed moulds, and milling methods similar to those used in CNC machining to reduce “analog” denture design’s heavy reliance on the hand-eye coordination and motor dexterity of the human designer. Because detailed patient information is stored digitally, denturists can easily reproduce a set of dentures, should one’s originals become lost or go missing

“Digital dentures make us able to be technically and minutely precise, something we could never do by hand,” stresses Kukucka, who notes that only 1% of dentures globally are manufactured using a digital system. “No matter how skilled a denturist is, it’s just not possible due to the limitations of human coordination.”

This year, Kukucka made a significant, six-figure investment in a sophisticated five-axis milling machine, which he describes as the most advanced denture manufacturing device in the world. At press time, there are only 15 in Canada. “This is the first one of its kind in this area, putting local Windsor on a global stage,” he states proudly. “That is our most beautiful piece of technology; in fact, we renovated our clinic to house this device and its auxiliary components.”

Besides Ivoclar, Kukucka now enjoys consulting relationships with companies such as 3Shape, for which he validates dental design software as well as intra-oral scanning devices

Kukucka also lectures internationally on his work. Within the last year, he’s addressed the International Dental Show in Cologne, Germany, a global affair attended by 160,000, and delivered a keynote address in Tokyo. “It was quite a remarkable thing to be presenting to the Japanese,” says Kukucka. “They pride themselves as the masters when it comes to denture manufacturing.” He has also lectured over 10 times this year in North America

While his jet-setting work schedule is formidably time-consuming, to hear Kukucka say it, he’d rather spend his time here in Windsor, working with people like Roberts.

“I just love everything about this industry,” he insists. “Even if I don’t have anything to do, I’ll go in on Sundays and and experiment with my tools and try to get better. That’s my life. I don’t do it for material gain. I do it because I always want the best. The best patient experience, the best workflows, everything. I do it because I want to discover what’s next and how we can do this better—how can we achieve the best patient experience.