Peter Wiebe doesn’t see himself ever retiring from being a musician, teacher, pastor, and dad
Author: Mick Chow
2 years ago
|
No Comments
Share On 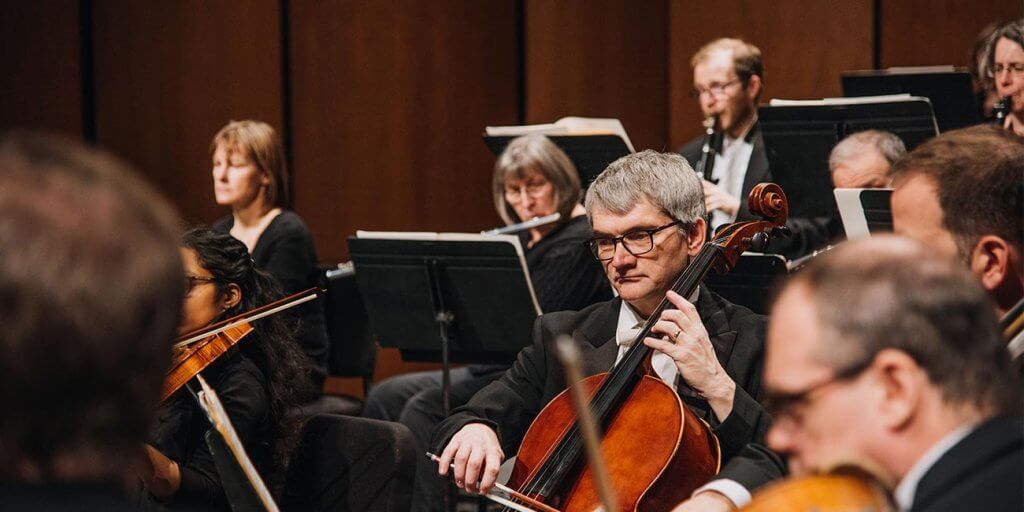 It was the spring of 2018. The Windsor Symphony Youth Orchestra (WSYO) took to the stage to perform their year-end concert. It was Peter Wiebe’s final one as conductor—and given that he was the one who had started the WSYO, it was a memorable moment indeed.

Windsor had a community youth orchestra back in the early 1980s, but the WSYO, which Wiebe started in 2004, is the first of its kind affiliated with the Windsor Symphony Orchestra (WSO). Wiebe separated the youth orchestra into two groups: the WSYO consists of youth aged 13 and up, and the junior training orchestra is 8 to 12 years old. They are taught by WSO musicians, perform side-by-side concerts with the WSO, and put on their own annual concert. It is an invaluable experience that prepares youth to become professional musicians. One such person is Jarrett McCourt, who now performs at the Winnipeg Symphony Orchestra.

The concept of the youth orchestra was conceived by Peter and then–WSO Conductor John Morris Russell. Peter did the legwork by organizing and recruiting musicians from local schools. Once he got the students, he held rehearsals every week.

His experience was very limited when it came to conducting at the time; he felt a need to practice being a conductor. Peter quips, “I used my kids as guinea pigs,” referring to his six children, all musicians. His youngest daughter joined the junior orchestra as a cellist, like her father. In his first year as conductor, four of his children played string instruments.

All children must audition to be accepted into the WSYO, and the rules were no different for Peter’s kids. To be fair, he invited a new musician from the WSO to judge the audition, one who wouldn’t know which children were Peter’s. He even gave his kids fake names. But it was all to no avail: after the audition, the adjudicator said, “I know who your kids are.”

Leaving the WSYO was just the end of a chapter in Peter’s life. “I wanted to devote more time to church work,” he explains. “That’s why I wrapped it up and gave my notice two years ago. I have no regrets; only a great sense of satisfaction.”

Peter is a pastor at the Windsor Vineyard Church, something he has been a part of since moving to Windsor in the fall of 1987 as a 23-year-old. Before becoming a pastor, he started out performing music at the church.

Originally from Manitoba, Peter met his wife, Ruth, when they were both undergrads in Brandon, Manitoba. Ruth also studied music. After moving to Windsor, they had their children. His views on fatherhood stem from his religious beliefs. “My Christian faith informs the way I look at everything, including music and family. The bible tells us our heavenly father is there to care for us. There’s the model; I encourage parents to speak words of blessing over their kids.”

Peter’s kids are adults now, and he says, “We’re all close friends.” When the children were young, family trips consisted of going to Manitoba to see extended family, but now he and Ruth go to the Caribbean on their own. “I thought it would be sad and lonely when my children moved out,” he says. “But we’re really enjoying it. I’m glad we still like each other.”

The Wiebe family continues to grow, and Peter and Ruth now have four grandchildren. The oldest is three years old. “I love playing with my grandchildren,” he says. “All those things from being a dad is coming back from being around them.”

Music lovers can find Peter still playing cello for the WSO, or he will bring his cello to the community. The WSO has collaborated with the Transition to Betterness program. Peter and WSO violinist Tino Popovic visit the palliative care unit at Hôtel-Dieu Grace hospital. They perform twice a month for patients suffering from cancer.

Peter Wiebe has shown quiet leadership in the Windsor community. Raising six children is a daunting task in itself, but he did it while serving his church, maintaining the highest standard as a professional cellist with the WSO, building community with the youth orchestra, and giving these youth the opportunity to also become professional musicians.

This community wishes he would never retire.