How Two Local Men Have Shown That Stepping Up Requires Showing Up
Author: Kim Pallozzi
2 years ago
|
No Comments
Share On 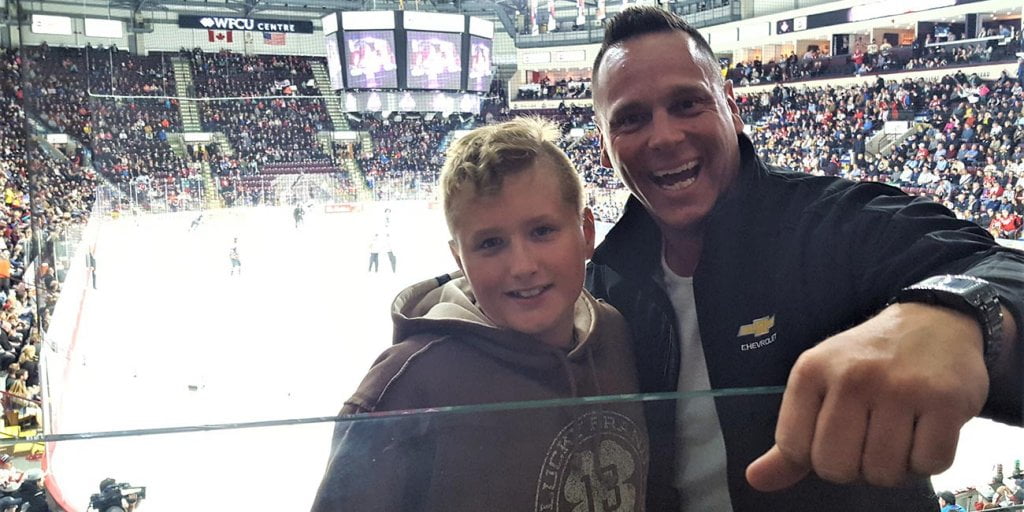 They always say you can’t choose your family, but Big Brothers Big Sisters of Windsor Essex is proof that sometimes family can instead be perfectly matched. The local agency carefully connects youth with like-minded, quality volunteers to provide valuable mentorship opportunities that often lead to life-changing relationships. This Father’s Day, it’s worth acknowledging that family ties aren’t the only ways to create a strong bond. Father figures and positive male role models are found in those who are present, reliable, and simply care; no relation required. For Big Brother matches Michael James and Kayden, and Jesse Power and Elliott, that’s all that really seems to matter.

“We’re two peas in a pod,” explains Michael James regarding his relationship with Kayden. “We don’t have to be doing something all the time for us to be having fun. We can be in the car driving somewhere, and there have been a couple of times where I had to pull over because I’ve been laughing so hard, I can barely see the road. We’ll crack up all the time. His sense of humour is phenomenal. He’s such a great kid.”

James, 41, does not have children and decided to join Big Brothers because, “as a kid, I was in a little bit of a tough situation of my own, so I saw the value in it,” he adds, “it’s just a great thing for kids who don’t have a male role model.”

The pair first met four years ago in 2016 when Kayden was 10 years old. “He’s 14 now and in Grade 9.” James describes how much he’s grown since the time he first met him and laughs, “I’m worried that he’s going to get taller than me soon, and I’m six feet.”

Before the pandemic, James and Kayden would see each other “at the very least once a week. We’ve only missed one or two weeks in the entire four years,” says James. “I like hanging out with him and what I really like is knowing that I have a positive effect on him. I care about him, and I want him to do well.” James further explains how Kayden is at an age where he could be negatively influenced, “and I’d like to prevent that.” Luckily, their relationship has a firm foundation, and the two can talk about anything. “Kayden is very honest, open, and trusting—he can talk to me and know that it’s not going anywhere unless he was in danger.” James is very impressed with Kayden’s willingness to share his feelings and explains, “He’s very mature that way.”

Since the quarantine restrictions in Ontario began in March, James and Kayden have continued to keep in contact regularly either by text or phone calls. Still, James emphasizes how, “I just know that talking on the phone isn’t the same for him, nor is it for me.”

When the pair did spend time together over the years, their outings varied. “I’m a big foodie, and he’s becoming one too. He likes to cook and I’ve kind of passed that on to him. Our outings usually involve food.” Throughout the past four years, James and Kayden had done elaborate activities such as treetop climbing in Michigan and driven to and from Indianapolis, Indiana, in one day to visit the city’s famed Children’s Museum. They’ve also enjoyed more mellow get-togethers close to home, like playing tag in the park when Kayden was younger.

For James, the best part about being a Big Brother is “realizing that I’m more his age mentality-wise,” he explains with a laugh. “It is super rewarding just because as someone who isn’t a father, I’ve got to see him grow up from a kid to becoming a young man. It’s really rewarding to see how great of a young man he’s become.”

As for Kayden’s perspective on his relationship with James, his comment is quite simple, yet couldn’t be more profound: “He’s my best friend, and he’s the type of man I want to be when I grow up.”

James’s hope for their relationship is that it be a lasting one. “I would hope that Kayden would never get too cool to hang out with his big bro anymore. I can’t see it happening because we do have that bond, but my hope is that it stays exactly the same. I want to continue to be family for the rest of our lives.”

“I always liked working with kids,” says 24-year-old Jesse Power, who enjoys “being able to pair up with someone I knew I could help.” Power and 12-year-old Elliott were matched back in February 2017 when Power was doing his undergraduate studies at the University of Windsor. “Elliott is currently in Grade 7. He’s a great kid, and he’s very positive.” Power continues to explain that from their very first meeting at Tim Hortons over a card game and a cup of hot chocolate, Elliott “was very comfortable with me, and we were able to bond about whatever it was he had on his mind, like family life, school life, his personal stuff, things he watches on TV, and games he plays on the computer.” From that day, Power knew immediately, “Elliott’s heart was really into it. He wanted this kind of thing.” What Power appreciates most about their relationship is, “I just like how comfortable he is being able to talk about whatever he wants to talk about. Either I’ll be telling a story or he’ll be telling a story. There’s no barrier of communication between us.”

The quarantine has understandably halted their regular outings, but the pair still keeps in touch as much as they can. “With coronavirus, it’s been a little bit trickier. I’ll call him and talk about how he’s been holding up with school being online. I want to hear what he’s been going through. We’re trying to coordinate when we can play computer games online.” Power and Elliott have a mutual love of computers, and both have taken on the challenging task of building their own; Elliott most recently. “I’d like to think he followed in my footsteps,” laughs Power.

Not only do Power’s interests have a positive effect on Elliott, but their outings have also had a significant impact on both of them. “I can remember specific times where Elliott said, ‘You know, this is really fun, I really like this.’ Even as simple as it is, and the moment he says it, like when we’re driving home from a Spitfire game or whatever, I think something like that is really meaningful. For him to be able to say, ‘I had fun with you, and I’m looking forward to doing this again,’ is important. It’s nice that he’s able to have that kind of emotion,” says Power, “I can definitely see how he trusts me and respects me.”

Power adds, “I can see Elliott as a family member in a sense because knowing him for as long as I have and being able to experience life with him for over three years now, I’ve seen him grow up and develop into who he is. It’s really cool.” Regardless of school and career obligations down the road, Power would like to continue their friendship “wherever life takes us.”

It Was Twenty Years Ago Today