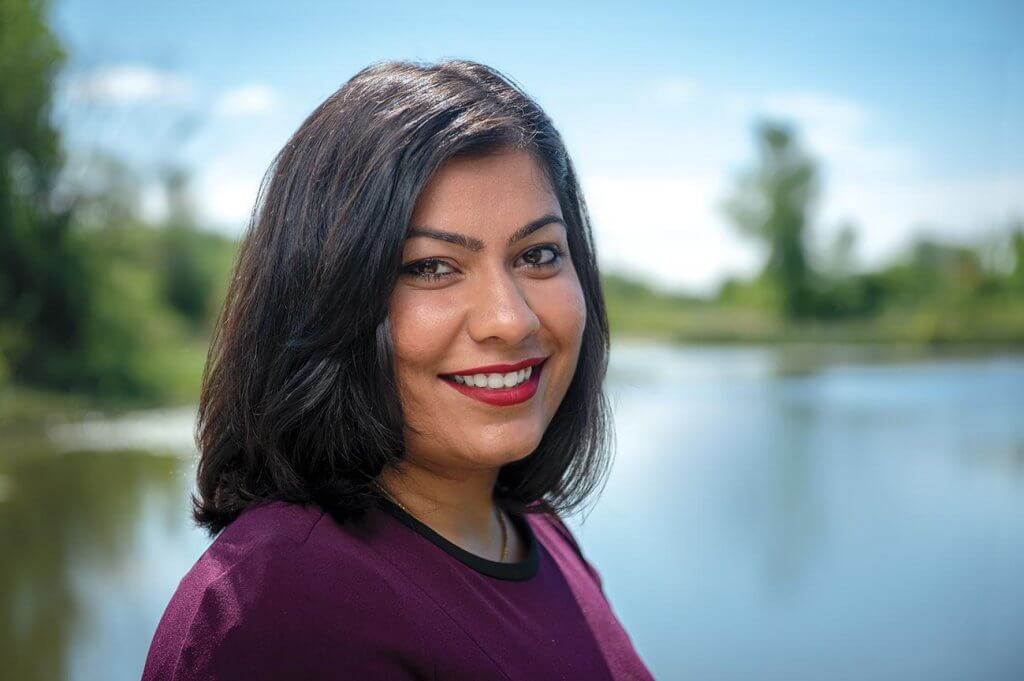 Most in the computer science field are tapered down to fit the mold of “logical thinker,” but Ikjot has always seen beyond the equation in front of her and says that computer science is actually quite abstract.

When she was completing her undergraduate degree in India, she had deep “whys” fluttering around her head, but says her teachers wouldn’t go beyond explaining the concept. “In India you can’t question out loud, or even challenge those types of questions. Teachers may not like that… and they control your marks and grades.” She explains that back home, many people expect youth to do what they’re told and not wander off the predesigned path.

Her parents, however, had a different philosophy when it came to her upbringing.

While other parents were choosing their children’s streamlined courses in grade 11, Ikjot’s parents let her pick her own trajectory. “At first I felt abandoned!” she laughs. “I told them that they were the only parents who were doing this!” Now she realizes that they were giving her a sense of responsibility, which is a unique privilege for which she’s grateful.

When narrowing down her decision, she thought back to how curious she’d felt when working with computers. It started with the thrill of playing and beating her older brother at car racing videogames, which increased to an interest in stimulating trivia games, and moved towards examining the “Pandora’s box” that was computers.

Once Ikjot chose her path, her parents continued giving her more responsibility.

Her father moved around for government work and they wanted a stable place for Ikjot during high school, so they gave her the autonomy to live on her own from the age of 15. Living on her own instilled a sense of confidence within herself to make mistakes, to align herself with her strengths, and to grow into her goals.

Ikjot wasn’t tempted to move abroad at first, and came to Canada only five years ago.

“In India,” she explains, “you are surrounded by people who will tell you who you are and because of that noise, you wouldn’t be able to see who you really are. That’s why I moved abroad. I didn’t want to care about what everybody else was thinking and I wanted to listen to my heart and really do what I wanted to do.”

Once she came to Canada, she knew she had to carve her mark into the industry, and she couldn’t do that without schooling. She enrolled in a PhD program at the University of Windsor’s Computer Science program within the topic of Cybersecurity of Connected Vehicles, focusing on the development of a framework for privacy assessment of the Network of Connected Vehicles.

To define what a network of connected vehicles is, she explains that right now drivers have full control over when they stop the car, but if we add Internet and connectivity to the equation, we could be dealing with personal information and internal machinery hacks. We’re already seeing hacks in the industry, and her PhD thesis defended the need for accurate encrypted code and all-around cybersecurity to prevent danger to the driver.

Cybersecurity affects—or will affect—everyone, and one of Ikjot’s main issues as a PhD student was performing academic research without knowing if it was going to be applied in real life. Automotive security is such a grey area in computer science that few educators know how to prepare students for the industry. There’s an entire gap between what students learn in academia versus solving real problems, like coding hacks that could endanger automated vehicles.

Now that she has graduated into becoming an assistant professor in computer science, her goal is to prepare students for the world by seeing beyond the equation in front of their eyes.

“I’m not the type of teacher who tells you what to do. I would actually prompt you to question that code so you can keep wondering deeper and relate it to your life, so you have that deeper understanding.” Ikjot engages her students in creative discussion and encourages them to question “why?” but this alternative method hasn’t always been well received by her peers or even some students. She says that initially the backlash really shook her since she didn’t expect this experience when moving to Canada and noticed an increase in her anxiety and imposter syndrome.

This is when her grounding and spiritual self-work, which she gained from living alone, guided her. She knew that as an empathic person, she needed to go within and filter out the noise from others to know what was truly important to her. This self-work differs depending on the day; sometimes it’s sitting with music and her thoughts, quiet time alone, or reconnecting with her old hobbies like guitar playing. After diving into herself, she can affirm which pieces of her life are missing and how she can continue towards her purpose. She says that her current mantra is “Focus on what matters,” which for Ikjot is working towards a future that benefits people beyond herself.

This is why she chose her PhD topic wisely and made sure that it could contribute to society at large.

Ikjot is currently in the perfect position to take on tasks within the tech industry while working towards shifting academia, bringing awareness towards cybersecurity, and encouraging more women to feel comfortable in a career in computer science. This is where the idea for a local chapter of Women in Cyber Security (WICYS) was born.

As the first Canadian student chapter, WICYS seeks to make new frameworks and to research ways they can be applied directly to industry. The ultimate goal is to build Windsor-Essex as the cybersecurity hub, especially with our automotive history. The group is currently made up of 160 people, split equally between women and men, though the entire board is comprised of women. This chapter has won the best student chapter award for this year, and though Ikjot has stepped down as president, she maintains her role as its founder, and will continue her work through opening more student chapters across Canada and increasing the number of women in the industry.

Currently, women make up only 24 percent of the cybersecurity industry, which has increased since last year’s 11 percent but is expected to go back down with COVID. WICYS has been successful in their recruit of women because they eliminate gender barriers from their marketing and networking language.

Ikjot speaks from experience when she says that it’s especially challenging to be a woman in cybersecurity, as they continue to work twice as hard without the recognition or appreciation in the industry. Even in the classes she teaches, out of 100 students only four will be women, and they seldom speak up in class.

Ikjot has been mentoring some of these students and uses this opportunity to pass on her own spiritual learning and to share her “why” beyond Windsor or even Canada. As she looks back at her home, she sees the need to provide mentors for youth in a variety of career paths. India has the largest amount of youth to date, and Ikjot says that if they don’t get the right guidance, they’ll feel lost and do things that we don’t expect them to.

“The worst thing we can give is a lack of responsibility for youth. My parents taught me that responsibility, and usually girls and kids aren’t given this. I was privileged with the gift of ownership of my life.”

Her advice for Canadian parents is to tell their kids they have faith in them, that they believe that they can handle their life decisions. Her advice for youth—and everyone—is to go within and listen, so you can know who you are outside of the noise of societal roles.

The other side of the camera