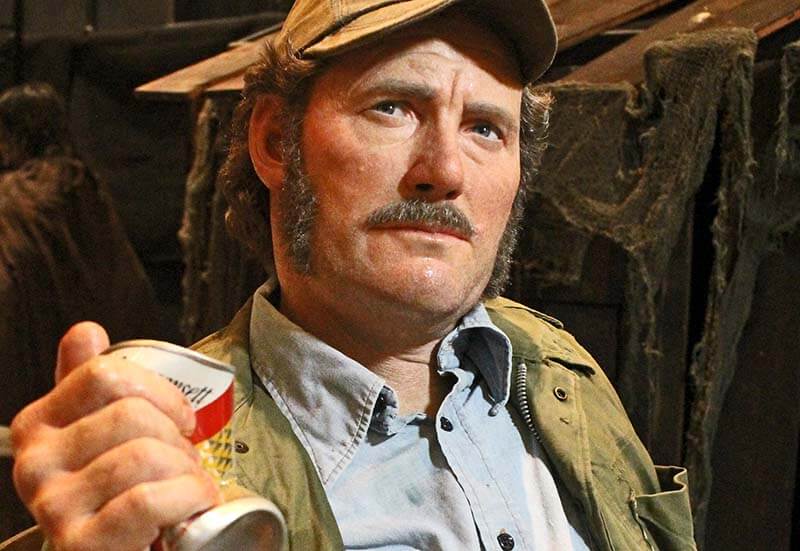 Nick Marra’s journey from the quiet town of LaSalle to the glitz and glamour of Hollywood might sound like something out of a movie: young man hops on a bus, travelling cross-continent to pursue his dreams of becoming an artist and finds mega success.

“It started in 1988 when I took a Greyhound bus to California with my brother,” recalls Marra, who now resides in LA County.

While there have definitely been some big screen moments in his 33 year career in the movie makeup effects industry, Marra is quick to point out that it was hard work, long hours, and risk taking that helped him become one of the most sought after sculptors in Tinsel Town.

“I have had a lot of breaks along the way, but I’ve made a lot of my own breaks,” he says. “There were many people that were more talented, but no one worked harder than me.”

So how did a kid from Essex County end up working on some of Hollywood’s biggest movies and TV series like Jurassic Park, Terminator 3, The Chronicles of Narnia, and The Walking Dead?

It all started with Play-Doh.

“I was a complete dinosaur nerd and I loved Godzilla too, so I would take my little toy dinosaurs and use the Play-Doh to put spikes on them and make them look like Godzilla,” he recounts. “I was about 8 or 9 years old and that was the first time I worked in three dimensional sculpting. I was obsessed.”

Throughout his teen years and early 20s, Marra continued to hone is craft; creating small celebrity busts and selling them at a friend’s movie store in LaSalle. He dabbled in costume makeup as well, and also began moulding wildlife sculptures for a local art gallery.

“That actually helped me when I got my first job in California.”

The idea of turning his pastime into a career first came around 1986 after watching a television show on WXYZ Detroit called Eye on Hollywood.  The episode featured a behind-the-scenes look at a special effects makeup school run by acclaimed American makeup artist Joe Blasco.

“I watched that and it was like a sign,” says Marra. “It was the days before the internet, so you didn’t know what was out there until you saw it on TV.”

Shortly after, Marra began saving up money; working at his dad’s screw machine business to earn enough to make his way out west.

“I knew I had to go to California if I wanted to do this for a living,” he says.

Marra arrived in LA County with his portfolio in hand and began looking for work by cold calling special effects companies he found in the Yellow Pages.

After his second call, Marra landed a job at Tom Burman Studios.

“It was a classic LA story; I called and asked them if they were hiring and they were,” he laughs. “I told them I was a sculptor and they said, ‘Oh great, that’s exactly what we’re looking for.’”

Over the next several years, Marra continued making connections through his work on various movies, including horror flicks like Bride of the Reanimator and Nightmare on Elm Street 6: The Final Nightmare.

“They actually let me do the makeup on Robert Englund for the movie’s dream sequence,” says Marra.

During that time, Marra had also completed a prestigious correspondence course through Dick Smith; one of the industry pioneers of special effects makeup. Marra credits his professional growth to the bond the two formed.

“He helped me so much,” reflects Marra. “He was so giving and caring and open with his knowledge.”

It was through Smith that Marra actually landed the biggest gig of his career: sculpting dinosaurs for the 1993 blockbuster hit, Jurassic Park.

While the baby Triceratops Marra created ultimately got cut from the movie, his talents can be seen in the film’s biggest star: the Tyrannosaurus Rex.

“It was a magical experience,” says Marra. “For a kid like me that grew up loving dinosaurs, it was incredible.”

Since then, Marra has gone on to work on over 200 films, television shows, and commercials. However, it’s his latest endeavor that has brought him the most joy.

In 2014, the artist stepped back from monster makeup and creatures and opened his own studio.

Marra enjoys the challenge of hyper-realistic art; studying the finest details and mannerisms to capture the true likeness of a person.

“The best compliment I get is when someone says, ‘You don’t just sculpt the likeness, but you capture the essence of the person.’”

His work in silicone busts has also earned him some serious street cred on the internet. His likeness of Quint from the movie Jaws went viral after appearing on the popular entertainment website, Ain’t It Cool News, forcing him to create his own social media pages to showcase his work. He currently has over 55,000 followers on Facebook, Instagram, and YouTube.

“My wife made me get Facebook, I didn’t even know what it was,” he laughs.

His realistic likenesses of Walter White from Breaking Bad and Yule Brynner from the original West World movie have also garnered the attention of collectors from around the world.

Despite some project setbacks due to COVID-19, Marra has kept busy growing his following and marvels at how fortunate he’s been in his career thus far. “I feel very blessed,” he says. “If I didn’t take these chances, where would I be?”