To brooks lumberyard
Author: Chris Edwards
5 years ago
|
No Comments
Share On 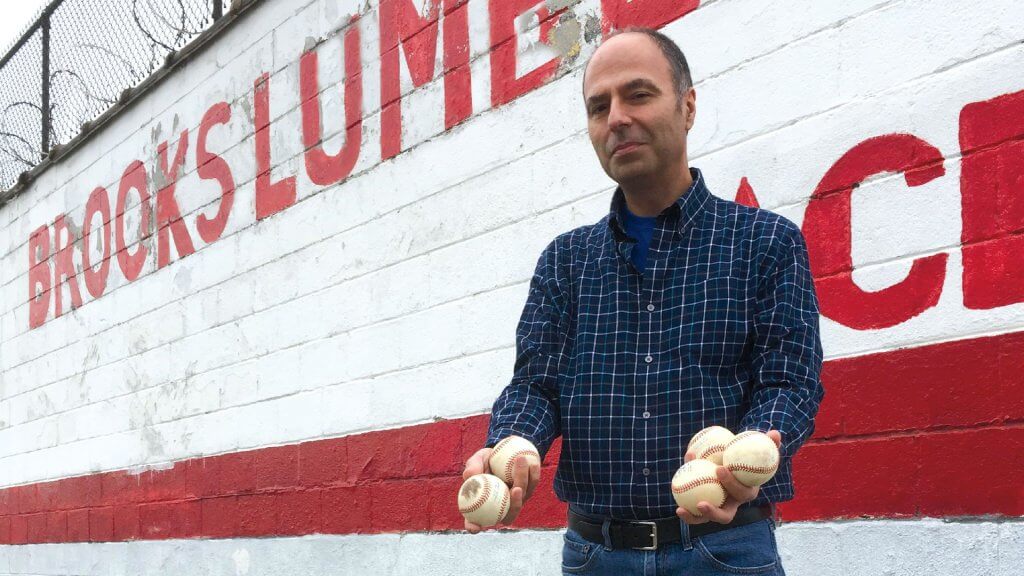 Brooks Lumber might ring a bell for baseball fans of a certain age. Located on Trumbull Street, south of Michigan Avenue (the legendary “Corner”) in Detroit’s now-thriving Corktown district, the lumberyard was famed as the landing ground for baseballs hit over Tiger Stadium’s right field roof (1912-1999).

During a recent visit, Mr. Formosa slid open a desk drawer to reveal five precious baseballs, the stuff of local legend. “I started collecting these roof-clearing balls after Kirk Gibson’s blast in 1983. I have 15 balls that landed in the lumberyard, including Gibson’s ’83 ball, which he reluctantly signed for me.” (Gibby notoriously refused to autograph baseballs.)

On July 13, 1934, George Herman “Babe” Ruth cracked his 700th homer over the wall in centrefield, in an era before the stadium—then called Navin Field—was fully enclosed; witnesses claimed the ball traveled over 600 feet! Detroit youngster Lenny Bielski was among a throng watching the game outside the park’s right-field fence. Bielski emerged from a wild scramble with the Ruth homer ball. As Ruth circled the bases, he yelled, “I want that ball! I want that ball!” Ushers were dispatched to locate it. Bielski was led into the park to much fanfare, given a twenty-dollar bill for the ball, and permitted to watch the rest of the game from a box seat

In 1939, Ted Williams was the first player to officially hit one out of the recently double-decked, enclosed park. Owner Walter Briggs believed baseball should be played in the daytime; the Tigers were the last team in the American League to install lights in 1948. After that, a ball needed to clear the giant light towers to reach the Brooks lumberyard, exiting the stadium at well over 400 feet.

Reggie Jackson famously drove a pitch into the top of those light standards on national TV during the ’71 All-Star game. Stormin’ Norm Cash cracked four taters over the roof during his tenure with the Tigers. New York Yankee Mickey Mantle’s landmark home run at the field was measured at 647 feet, perhaps the longest ball ever hit in the majors.

But what became of those baseballs that thundered into the lumberyard?

Typically, a crowd would scramble through its gates to chase the ball down. “We didn’t think the balls had any perceived value,” says Mr. Formosa. “It was a much simpler era. That is, until Gibson hit his blast in ’83. Then I started to collect them.”

Mr. Formosa grew up one block from the stadium; it was easy to slip into the park when the players were practising, so baseballs were easy to find. “I played sandlot with the balls we scooped up until the strings came off.”

During the ’67 Detroit riots, sportswriters witnessed fire and smoke looming behind the stadium’s outfield walls, even as a Tigers-Yankees doubleheader played on. These historic and tragic events were a disaster for Corktown. Coupled with the opening of the I-96, I-94 and I-75 freeways, which tore through the heart of the neighbourhood, Corktown soon became a ghost town. Two years following the 1967 riots, more than half of Corktown’s population fled, many simply abandoning their homes. A once-proud community had been decimated. In 1999, Tiger Stadium was shuttered, and the team relocated to Comerica Park.

The Brooks Lumber Company soldiered on. “I took my life savings and put it on the line for my business. I knew someone had to service people in the local construction industry. When the stadium closed in 1999, it actually turned into an opportunity for the neighbourhood to reinvent itself. Nemo’s Bar continued to cater to nostalgic sports fans before and after games, Slow’s BBQ opened and Corktown slowly began to rise.

“We’ve been here through thick and thin. Today, companies are heavily investing in Corktown’s rebirth. Our business is surrounded by new construction, including condos and retail space, and it’s just the beginning. Michigan Avenue has sprung back to life. The old ballpark has reopened as headquarters for the non-profit Detroit Police Athletic League (PAL), a $20 million project including the Willie Horton Field of Dreams, named after the hometown hero who played on the 1968 Tigers World Series champs.”

Formasa adds that ironically, the freeways that initially drove people out of Corktown are the very reason people are starting to flood back into the area. The convenience of living in such an ideal neighbourhood with easy access to the freeways is very attractive.

“Either you are dedicated or crazy, but we always believed in Detroit, and now things are turning back toward the good.”

Chris Edwards is the owner of Walkerville Publishing, along with his partner Elaine Weeks; their latest book is 5,000 Ways You Know You’re From Detroit.