Heritage and history aged to perfection 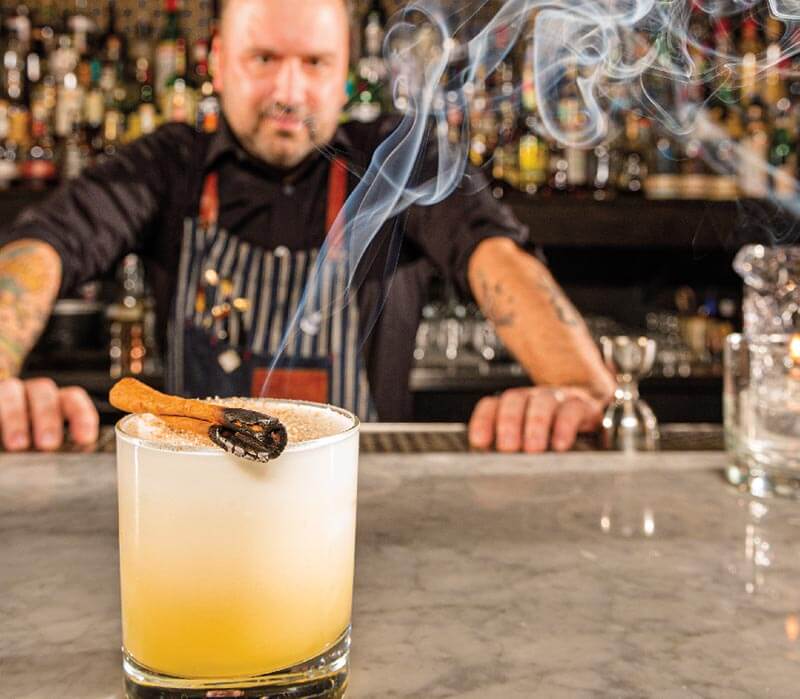 As you spy the amber tides swirling around the base of your tumbler and inhale its complex bouquet, it’s easy to get lost in the reverie, history, and tradition of this magnificent liquid. You tilt back a dram of this long-aged whisky and think of where it’s been and the life it’s lived. It washes across your palate, exposing sweet notes of satisfaction—as you watch the golden droplets slide down the sides of your cup and back to their receding ocean below.

The roots of Canadian whisky are older than Canada itself. In 1858, Hiram Walker moved to Windsor to open a flour mill and distillery. His contemporary, J.P. Wiser, had moved to Prescott a year earlier to work at his uncle’s whisky distillery. Both American-born entrepreneurs brought to British Canada the tradition of flavouring whisky by adding rye.

Walker’s whisky, Canadian Club, would become the most distributed Canadian whisky in the world. Canadian Club Premium Whisky would become a staple around the planet—even winning the acclaim of the British Royal Family. During the American Prohibition, gangs fought wars to control the illegal import of Canadian Club to the United States and counterfeit rip-offs of the brand were prominent in those days when bootlegging couldn’t meet demand.

Over the years, not much changed with the Canadian Club brand and by the 1980s, international competition and a lack of diversity in their product portfolio—a common problem with Canadian whiskies at the time—led their fortunes to take a turn.

Inspiration from Canadian Club’s competitors in the bourbon and scotch markets allowed for massive growth in the company and a revolution within the Canadian whisky industry that has raised the beverage to new award-winning heights. The culmination of Canadian Club’s success can be seen in their Chronicles Series of whiskies. First released in 2017 to celebrate Canada’s 150th year of Confederation, Canadian Club has annually released a unique 40-year-old whisky that has become the toast of the whisky industry.

In 1858, whisky wasn’t new to the Commonwealth of Canada, although it was mostly unaged wheat whiskies in the beginning. John Molson began selling whisky commercially in 1801, taking advantage of the supply shortage of French wine and brandies exported to England during the Napoleonic Wars.

Walker and Wiser revolutionized the budding practice and took it to new levels. As bourbon and Tennessee whiskey became a staple in the United States, rye whisky soon became synonymous with Canadian whisky. Canadian Club became the drink of choice for Queen Victoria and the company was issued Royal Warrants from the queen in 1898 and King Edward VII in 1901.

The history and culture of rye whisky, much like hockey and the early fur trade, is ingrained in the fabric of Canadian culture. Canada has fought to protect its whisky—imposing regulations like a three-year aging requirement in a wooden cask and, at times, using high tariffs to keep foreign competitors at bay. The Canadian whisky industry has been threatened, even prohibited—and when Canada was through with its anti-alcohol prudishness, its entrepreneurs made a little extra coin smuggling its barrels to the United States during the later American Prohibition.

Canadian Club even had a place in the infamous St. Valentine’s Day Massacre. Four unknown perpetrators, thought to be at the direction of Chicago gangster Al Capone himself, machine-gunned seven members of the infamous North Side Gang, freeing up their bootlegging connections in the area. Walkerville’s Canadian Club became a drink of choice among illegal importers, brought through Detroit by the Purple Gang and widely distributed, by affiliates of Capone, across the United States.

Whisk(e)y is characterized as a distilled alcoholic beverage derived from fermented grain mash. Typically, the grains used are barley, corn, wheat, and rye, followed by aging in wooden barrels.

Although the act of distillation dates back to the first-century Greeks in Alexandria, the earliest records of alcoholic distillation are dated to Italy in the 13th century.

No later than the 15th century did the practice make it to Scotland and Ireland, as well as the popularization of distilling “aqua vitae” or the “water of life”—a name widely attributed to the production of distilled alcohol. At this time, Scotch whiskies and Irish whiskeys (they each spell the word differently) started appearing by name in letters and literature—and a movement was born.

Over the years, Canadian whisky has been popularized across the globe and is still in high demand. Brands like Crown Royal, 40 Creek, Black Velvet, Seagram’s, and Gibson’s Finest have popped up over the years to join Canadian Club and J.P. Wiser’s, but foreign competition in the 1980s could have been a death knell for the entire industry.

“The Canadian whisky industry took a hit back in the early ’80s,” recalls Canadian Club brand ambassador Tish Harcus, who has been with the brand for 32 years. “Single malt scotches came on really strong and came over here to North America. The cocktail culture over in Japan started and Hollywood got involved—and then flavoured vodkas came to town. We started to see our sales slide.”

The minds at Canadian Club came to a realization: from 1858 to 1984, they had offered only one brand of whisky: Canadian Club Premium. “We started to realize, it’s not just about one whisky, and that’s all we were making from 1858. Our master blender decided we’re going to do something different here.”

The mash fill contained all the usual suspects—corn, rye, rye malt, and a lot of barley malt—but this time, it was aged for 12 years. Harcus says the 12-year whisky put them back on the map. They followed up their success with Canadian Club 10-Year-Old Reserve and Canadian Club Sherry Cask in 1992. She adds that they even marketed a Japan-only brand called Canadian Club Black that was an instant success.

“We always have our ears and our eyes on the market,” explains Harcus. “Canadians love Canadian Club and Australia loves Canadian Club, but, specifically, we got a lot of our influences from the U.S. back in the ’80s and we were asking, ‘What else can Canadian Club do?’ To be Canadian [whisky], you have to be aged a minimum of three years. Our master blender said, ‘To heck with that, our base is six years—we’re going to do twelve. We’re going to blow this right out of the water.’”

Throughout the rise of globalization, rye, bourbon, and scotch manufacturers have always been in competition and marketing has been key. Different agings, different finishes, sharp packaging—whatever catches the imagination of the consumer.

“We make this incredible rye malt,” explains Harcus. “It’s very difficult to make 100 percent Canadian rye. Walkerville here couldn’t do it because it clogs up the lines. When you break down rye, it’s a tiny little grain but has a very thick skin and when you break it down, it becomes very gluey.

“That’s when the renaissance, I believe, really started to come. All of a sudden, people were calling from all over the world and the awards were coming. Canadian Club, Canadian Whisky—the whisky industry in Canada really started to pick up and innovation was going crazy and that’s where we are at today.” However, Canadian Club wasn’t done wowing the whisky community. In 2017, in honour of Canada’s sesquicentennial, Canadian Club unveiled the first edition of their Chronicles Series—a 40-year-old whisky bottling—unheard of among ryes. They did 7,000 bottles and it sold out before Harcus could complete her coast-to-coast promotional tour of the whisky. It was popular enough that they released a 41-year old in 2018, 42 in 2019, and this fall, they released a 43-year-old whisky.

However, it’s not like you can just let a barrel of whisky sit in a shed for 43 years and expect success. “You have to look after it, you have to make sure the conditions are right,” she explains. “It’s constantly breathing. If you think about it—every second of every minute of every hour of every day, the whisky breathes. It goes into that oak, it comes back out, and it pulls all the caramels and toffees and tannins and vanillas and everything. It’s a living thing. Although, when you think about this stuff, it’s been sitting there since 1977—it’s pretty spectacular.”

Harcus explains that the Walkerville District is a league of competitors. Canadian Club and J.P. Wiser’s have been in competition since 2005. Also, in 2017, the Canadian Club Brand Heritage Centre was shuttered, much to the disdain of local whisky lovers. “It was a nice place for people to come tour, learn the history of our founding father, Hiram Walker, and Canadian Club whisky,” says Harcus. “But we’re not on a trail, we’re not on a bourbon trail or the scotch distiller trails—we don’t have that—we’re in a residential area on Riverside Dr. When it closed in 2017, it was more about restructuring—what more can we bring to it?”

The plan is to reopen the centre and embrace the concept of a ‘Walkerville Distillery District,’ something that Harcus says Windsor Mayor Drew Dilkins has been very interested in. Considering Canadian Club, J.P Wiser’s, and Gibson’s Finest are all made in Walkerville—as well as Lot No. 40, Pike Creek, Crown Royal, and Wolfhead craft whisky in Amherstburg—there is plenty of local whisky heritage to go around.

The Windsor-Essex region’s influence on the world of whisky was front and centre at the 2020 Canadian Whisky Awards gala, hosted in Victoria, B.C., on January 16. Canadian Club Chronicles 42-year-old was crowned Connoisseur Whisky of the Year (Multi-Market) and was awarded a gold medal. Canadian Club Apple Whisky also received a bronze medal.

“I hope people make it at home and enjoy. It’s been very popular around the holidays at my bar, mainly I think because it’s an approachable whisky sour but with holiday spice flavours and the fact that it has a smoking garnish doesn’t hurt. The inspiration for this drink came from the scents in my home around the holidays: cinnamon, cloves, fireplace smoke, and whisky.”

“The Canadian Coffee is a truly Canadian twist on a classic coffee cocktail. The cream is sweetened slightly with the maple cream liqueur Cabot Trail. With the Canadian Rye, maple, and coffee flavours perfectly balanced, this is sure to become a holiday favourite. Feel free to enjoy with or without the cream and adjust the maple syrup depending on your sweet tooth, just as you would personalize your own coffee.”

“Nearly everyone has a Christmas movie they consider to be timeless. You can probably guess our pick by the cocktail’s name. To think of the holidays is to think of family, friends, and flavours we’ve enjoyed together for generations. This drink incorporates flavours that our parents, grandparents, and great-grandparents might have enjoyed. We put together a house-made roasted chestnut and cranberry syrup with a bit of fresh-squeezed orange juice, hinting at the age-old tradition of oranges in stockings. The finishing touch, of course, is a snowfall of delicate dark chocolate shavings to make this drink a new holiday favourite.”