A Windsor businessman who cared deeply for people and whose focus was the positive side of living has left a number of Canadians the ultimate gift a human can bestow on another: the gift of life.
Author: Veronique Mandal
3 years ago
|
No Comments
Share On
Share on email
Share on facebook
Share on twitter 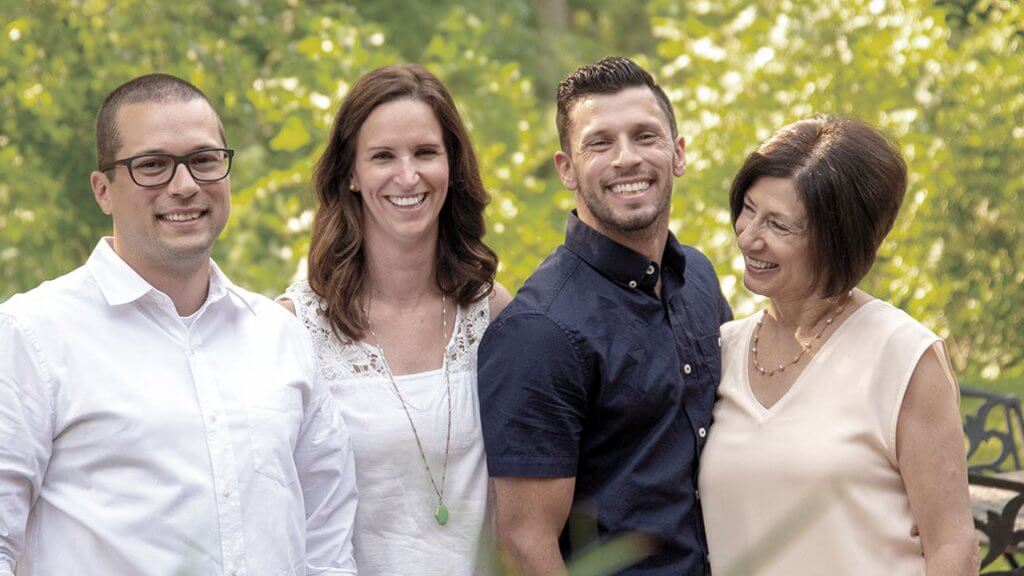 Len Martindale lived a large life. Handsome and gregarious, he was successful in business, never turned away from a challenge and had the loudest laugh in any room. He was a man who looked at life through a lens of joy and generosity and, most importantly, he was a devoted and loving family man.

His sudden death in May 2016 at age 62, following a stroke, left his family and friends in shock and grief-stricken. Yet, in their darkest hours mourning the man they so loved, his family made the decision to donate his healthy organs so that others might live.

Today, his eyes, liver, lungs and kidneys are giving other families the joy of knowing that the quality of life for those they cherish has been forever changed by the generosity of one man and his loved ones.

Losing a man who was not only his dad but also a mentor and role model, broke Scott Martindale’s heart. Sitting on the patio of his home on a warm June morning with his wife Tiffany, the 35-year-old talks about his father through tears and laughter

“He was fearless,” said Scott. “He worked two or three jobs as a teenager and bought himself a silver Corvette. He got into go-carting and skydiving, then he and Mom started dance lessons and because he wasn’t happy with how the dance studio was being run, he started one in Kingsville. He loved a challenge. He had a passion for life and things that moved fast. He didn’t like golf.”

Scott has taken over from his father and together with his brother Jeff, 32, they are keeping his vision and passion for his business alive.

“We worked there as kids,” says Scott, who laughs at the memory. “I worked for another company after graduating from St. Clair College but ended up working for Dad. I knew he would like us to come into the business because he believed he had built a good business and wanted to keep an eye on us. As the third generation we are taking the company into its 75th year.”

Len’s life, while filled with much success, was not without struggles. He suffered the loss of his closest brother in a drowning accident and during the recession years, it was hard to know how to keep food on the table of his family and his employees. Scott’s love and admiration for this father is evident in the stories he tells about watching how his father dealt with people

“If he saw someone getting a raw deal he would given them an opportunity to achieve, to do better, and he always took time to give them advice,” said Scott. “He was one of the most truly generous people.”

Tiffany says Len would go out of his way to give people his undivided attention and it didn’t matter who they were or what they did.. She wipes away tears when she talks about the love she saw from her father-in-law for their two daughters Gracie and Rosie.

“He thought the sun rose and set on his granddaughters,” she said. “He was a big burly guy and his voice could go up 10 octaves when he was playing with the girls. He would pop over to see them on his way to work and would stay even if he was going to be late. The girls loved their G-Pa.”

The Martindale family was at their cottage on the holiday weekend in May when Len suffered what was first thought to be a minor stroke. He was given a clot-busting drug and admitted to the hospital in Huntsville, unable to move one side of his body. Several days later he was admitted to a Windsor hospital.

Pat, Len’s wife, said she watched as her husband struggled to point to words on a board because he could no longer speak. Her grief still raw, she says it was heartbreaking watching him try to communicate.

“It was very difficult not being able to talk to him at the end,” she says, then laughs. “It must have been frustrating for him not to be able to have the last word. I promised him we would all stick together as a family and make him proud. And, we are, and the boys are making him proud.”

Her voice breaking at times, she says what she cherishes about her husband is not only his joy and laughter, but also how he dealt with things and people in his life.

“He never made judgements and never criticized. If he was angry he said his piece and moved on. It was forgiven and forgotten. I really admired that about him.”

That quality in his father is also something Jeff is grateful for.

“He was a wonderful role model and even when we were kids he was loving and kind towards us,” said Jeff. “I made mistakes, but he never held making mistakes against us and once it was over he never brought it up again. You just moved on.”

Though grieving his loss, Pat says when approached by the representative from the Trillium Gift of Life foundation, she responded before the woman had time to ask the question.

“I said ‘yes.’ Then she said, ‘But you don’t know what I’m asking.’ I told her I did and that we would absolutely donate Len’s organs. I knew it would be what he wanted.”

They all agree that the decision was difficult but are all grateful for the respectful way they were treated and how Len was respected through the entire process.

“It does delay the grieving process because there is so much co-ordinating that has to happen with organ donor lists from across North America and everything is time sensitive,” said Scott. “But we never felt rushed and it did give us a peaceful time with the family, knowing what we had done was helping others and we had no regrets.”

The woman helping the Martindale family through the donation process was Stephanie MacDonald. She says donor families like the Martindales are “remarkable people,” who are heroes not only to the recipients of Len’s organs, but also to the donation and transplant system. She says it is also helpful when donor families speak openly about their experience and relate their impactful stories.

“Every family I meet is unique and teaches me something about altruism, kindness and the beauty of humanity in this world,” said MacDonald. “I feel privileged to have been a part of Len’s family’s journey. In most cases I develop a close bond with them, each family leaving me with a piece of their journey. Len’s family will always be in my heart.”

MacDonald says most people don’t understand that organ donation is rare because a person has to die in a Critical Care Unit, on life support or mechanical ventilation to be considered eligible. Only two to three per cent of hospital deaths are medically able to donate. The potential for issue donation is greater because those conditions don’t apply

There are 1,577 people waiting on the transplant list in Ontario, with 1,100 waiting for a kidney. The wait time for a kidney is five years: the average wait time for a heart is six months. In 2017 there were 347 deceased organ donors and 263 living donors. The registration rate in Windsor is 29 per cent, with 22 people on the wait list.

MacDonald says there are many reasons why people don’t register to be a donor. However, neither age nor medical condition (which is assessed at the time of death) nor religion prevents donation. She also suggests families talk about organ donation long before a death occurs.