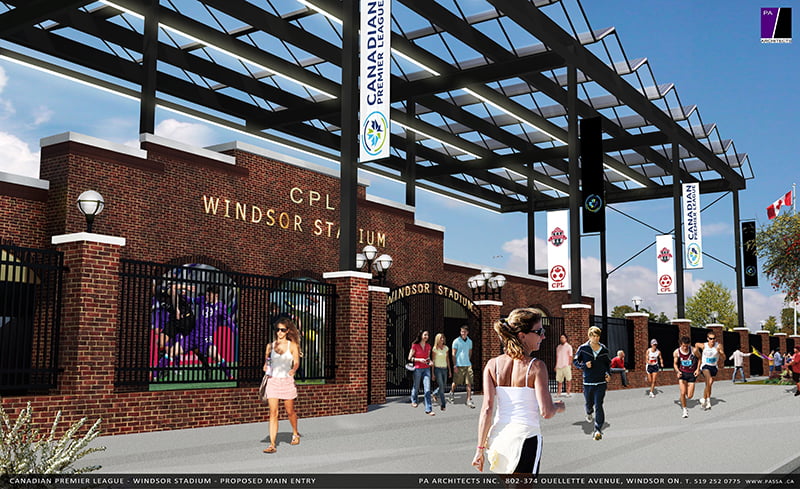 When David Clanachan and Sasho Cirovski were teenage soccer prodigies growing up in Windsor, they were part of a select squad that travelled across the border to play in an all-star youth league set up by the NASL’s Detroit Express.

“We started playing together in Windsor at the age of eight,” Clanachan recalled. Eventually, like almost every young elite Canadian soccer player, they hit the end of road in terms of places to play once college soccer eligibility was done.

Cirovski was among the fortunate ones. He went to play college soccer in the USA and today, is the very successful coach of the University of Maryland team. For most, though, youth soccer was the end of the journey.

“There was nowhere to go,” Clanachan said. “Very few young Canadian players were able to go and potentially play overseas.”

“Now, there’s a place for young kids to continue to play. They have something to aspire to. It keeps them in the game.”

That place is the Canadian Premier League, and Clanachan knows it well. He served as commissioner of our country’s professional soccer league since 2018. In January of 2022, Clanachan announced he was stepping down as commissioner of the CPL in order to head the development of an expansion club in the Windsor/Essex County region.

After helping get the league off the ground, Clanachan’s ultimate dream was to bring the beautiful game and give it a home in the place he calls home. And he’s doing so alongside Vancho Cirovski, the bother of his childhood friend and long a prominent presence in the Windsor/Essex County soccer community.

“We’re not mercenaries,” Clanachan said. “We’re from Windsor. Our reputations are there. This is a passion project for us.

“I’ve had many say to me, ‘Why Windsor?’ Because that’s where I’m from. That’s where I started and learned much of what I was able to practice in business for so many years. I think it’s just a great part of the world. People appreciate those who put in an effort there for sure.”

For those who don’t count themselves among soccer fans or who are but perhaps haven’t followed the path of the CPL, here’s what the league is all about.

The CPL recently completed its third season. It’s an eight-team outfit, but the expectations are that expansion will be arriving quickly in the next several years.

“The proof of the fact that we’re getting traction with everyone is the number of potential franchise owners that we’re talking to today,” Clanachan said. “And that’s not even including Windsor.

The CPL is following the traditional model that so many of the smaller European cities maintain with their local soccer team. Build a relationship with the community, become part of the fabric of the town and make the people feel like they are an element of the success of the club.

“We were the only developed country with an abundance of talent that didn’t have a professional league,” Cirovski said. “It was there to be plucked.

“What the CPL has done is it has constrained the investment to where it’s affordable. And then we’re building the foundation below it. It was already there. It just needed to be integrated and plugged in.”

The reality is that after several attempts to create a national league in the country, the timing might just be perfect for the CPL. The sport has never been hotter in the Great White North. Canada is the reigning Olympic women’s champion. The men’s national team has qualified for the World Cup for the first time since 1986. In 2026, Canada will be one of the host countries for the World Cup.

“As that’s bubbled along, the CPL has come on at the right time,” Clanachan said. “We’ve created a pathway. What I like to say is we created that north star.”

If They Come, Where Will They Build It?

The $64,000 question, the elephant in the room if you will, is where will a Windsor CPL team call home? One of the qualifications to garner a CPL franchise is access to a soccer-only stadium.

The answer is sitting right there on McDougall Ave. A reconfigured Windsor Stadium.

“What better place than to rejuvenate Windsor Stadium to a 4,000 up to 6,000-seat stadium? Cirovski reasoned. “We’re ready for it.”

There are already conceptual plans in place to make this work for the Windsor CPL team.

“The thought of a CPL franchise in Windsor really excites me,” Sasho Cirovski said. “The vision of seeing Windsor Stadium jam packed with the pride of our entire community is something that I want to see and be a part of. I grew up cheering for and idolizing the Windsor Stars. It’s where I found my passion to make a life in this beautiful game.”

Will It Work This Time?

Cirovski is no stranger to Windsor attempts at making big-time soccer fly in the city. Over the years, several versions of the Windsor Stars, in leagues such as the NSL and CSL, have come and gone.

Why will it click this time around? It’s a fair question and one the men behind Windsor’s CPL bid can readily answer. They believe that the community aspect of the CPL, coupled with the sport’s changing landscape, will make for the perfect marriage.

“The country has matured,” Clanachan said. “The game has matured around the world. It’s not as cliquey or as ethnicized, if you want to call it.”

In the Windsor/Essex County region, there are approximately 10,000 players registered with 18 separate clubs.

“It’s our job to get the message to people that the soccer community is one,” Vancho Cirovski said. “The interest in a professional franchise has to be community wide.

“We’ve got to build that interest and really drive the long-term perspective. It’s not a project for one or two years.”

“Our own CPL team will be galvanizing for the community and an inspiration to all of our children,” added Sasho Cirovski.

When Will They Arrive?

Excited about watching CPL action in Windsor? Good for you but you best not be queueing up for tickets just yet. The window of opportunity for bringing a franchise to town is barely open a crack.

“It hasn’t really connected yet, so this is part of the task,” Cirovski said. “Dave’s made public the interest and intent and the condition that we need to find a location. He’s also communicated to the Essex County Soccer Association that we need to be unified.”

The reality is that this team will be landing later rather than sooner, although the optimist in Clanachan believes that they are capable of getting a side on the pitch sooner than their latest possible projection for success.

“I’ve been clear about it,” Clanachan said. “If the stars are aligned, we would like to start playing in the spring of 2024. Now that’s tight, very, very tight. They’ve got be aligned.

“At the very least, we want to be playing at the professional level by the latest in the spring of 2026, before the World Cup comes to Canada. That’s important for us. That’s where I think we need to be.”

Further to where they need to be, Clanachan is also confident in that place being Windsor.

“This club is all of us,” Clanachan said. “This is not Clanachan and Cirovski doing this thing, this is everybody doing it. I’m a big proponent of that.

“Really, the only key to the deal for me is you’ve got to get everybody involved, passionate and really supportive of the club. I think in Windsor, we’re pretty good at that. And then we’ll do the rest.”