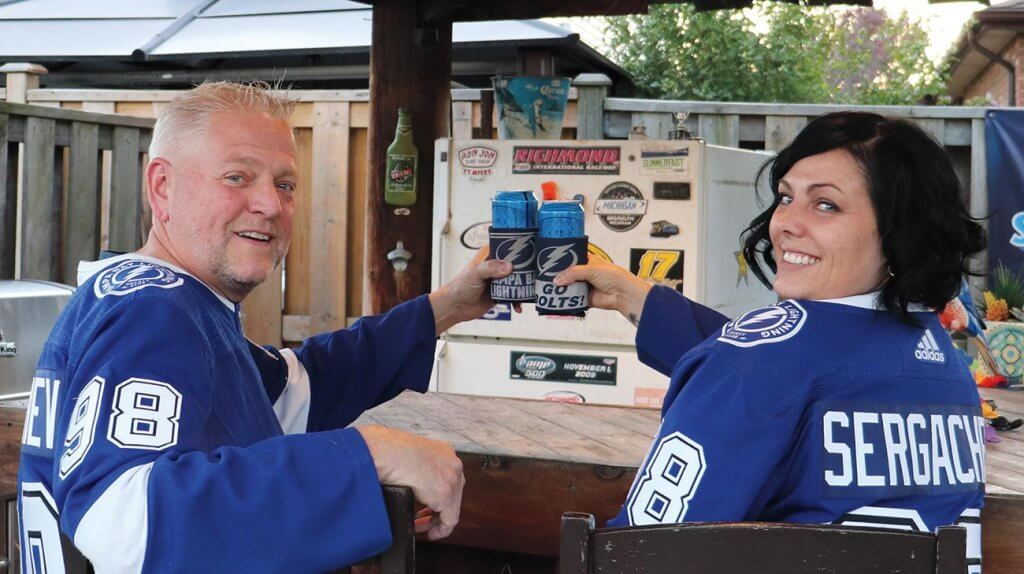 As the last minute of the 2020 Stanley Cup Final ticked away at Edmonton’s Rogers Centre the evening of September 28, Brian Reid finally got comfortable with the idea of popping open the champagne chilling in the rec room bar of his and wife Michelle’s Tecumseh home. For her part, Michelle—eyes welling with prideful joy—had been ready to celebrate for most of that Game 6 third period, what with the Tampa Bay Lightning in firm command of what would be a Cup-clinching 2-0 shutout over the Dallas Stars. Her husband, though, was in full “don’t jinx them” mode.

“She was ready to start celebrating at the beginning of the third period but I kept telling her not yet—there was still a lot of game to play,” laughs Brian, days later. “But I think that during the last minute even I knew it was a done deal, and it was time to celebrate.”

Of all the hockey fans across Windsor and Essex County who may have been pulling for the Tampa Bay Lightning, none had more reason to celebrate than the Reids. And that’s because on the large screen in front of them skated their 22-year-old “adopted son,” Lightning defenceman Mikhail Sergachev, the former Windsor Spitfire they had taken into their home in 2015 as a shy and nervous 17-year-old from Russia. Five years later, the Tecumseh couple beamed with pride and watery eyes as they watched their “Misha” check off another of his long-sought hockey goals: Stanley Cup champion.

“Amazing, incredible, and just so very proud,” was the way the couple described their feelings watching Sergachev and his Lightning teammates claim the franchise’s second Stanley Cup. As their favourite Lightning player took his turn raising the Cup, the Reids’ emotions swelled, and then increased tenfold within the hour when Sergachev called them to share the very special moment with his cherished “second family.”

“It was just such a surreal and proud moment,” said Michelle. “To know him for as long as we have and the special relationship we’ve developed over the past five years, it’s just been so many emotions and so much pride in his accomplishments. We’ve been with him since the beginning of his hockey journey in North America and we know as well as anyone just how hard he has worked to reach his goals. We’re so happy for him and all he has accomplished at such a young age.”

Sergachev is one of 27 Spitfires the Reids have taken into their home over the years, most of them Russian. While the couple remains in close contact with many of them, their bond with Sergachev has been particularly special and lasting. They communicate with him on an almost daily basis during the season, and in normal years make at least two trips to the Tampa area to catch a string of Lightning home games while travelling to as many road games as they can manage.

For a moment in this most unprecedented of NHL seasons, the Reids thought they might have an opportunity to see Sergachev compete for the Stanley Cup in person. Instead, they nervously watched the Finals as they had the entire “bubble” portion of the 2019-20 season and playoffs: just the two of them in the comfort of their own home. “We were ready to go,” says Brian. “But they announced that families could attend only three days before the final started, so with the quarantine rules that were in place once you got inside the bubble, it just wasn’t possible. We watched all the games together though and it became a real special part of our lives the past couple of months. But also stressful too! We’re glad it’s over and how it ended.”

The Reids say what they are most proud of among Sergachev’s many accomplishments to this point in his young career is the way success has not changed the person he was when he lived with them. That, and a work ethic they say was evident from the day he entered their lives, with nary a word of English in his vocabulary. From learning a new language and acclimating himself to North American life, to playing a major role in the Spitfires 2017 Memorial Cup championship and now the Lightning’s second NHL crown, Sergachev’s work ethic has been continuously relentless in all he’s pursued.

“He was a 17-year-old arriving in a new country to live with people he didn’t know when we first met him,” says Michelle. “But we quickly realized what a great personality he had, and that he was a young man who knew what he wanted to accomplish. He just wanted to learn so much, whether it was with hockey or learning the language, or any other challenge he faced on or off the ice.”

A first-round (ninth overall) pick of the Montreal Canadiens in 2016, Sergachev was traded to the Lightning three seasons ago and has quickly evolved into one of the higher-end defencemen in the league—and soon he’ll likely be compensated as such with a new contract from either the Lightning or a handful of other interested clubs.

“He deserves being a Stanley Cup champion and he deserves everything he’s about to gain from a financial perspective too,” says Brian. “From the day he got here, his goal was to be an NHL hockey player and while every junior player has that same goal, his drive and dedication were just through the roof. He has always been very, very dedicated to what he wants. He’s just a great kid.”

Like all hockey fans, the Reids hope they’ll get to see Sergachev play in person at some point during the next NHL season, which is now expected to start in January.

“Hopefully at some point during the next season things open up a bit and we can see him play live,” says Brian. “Regardless, we’ll keep following him and all the other guys we’ve had the pleasure of welcoming into our home who are still playing. They’re all like family to us.”

Stepping into the Spotlight

The Ironman and his Iron Maiden