One person can make a BIG difference

GreenerBins tells us how
Author: Layan Barakat
Photographer: Syx Langemann
4 years ago
|
No Comments
Share On 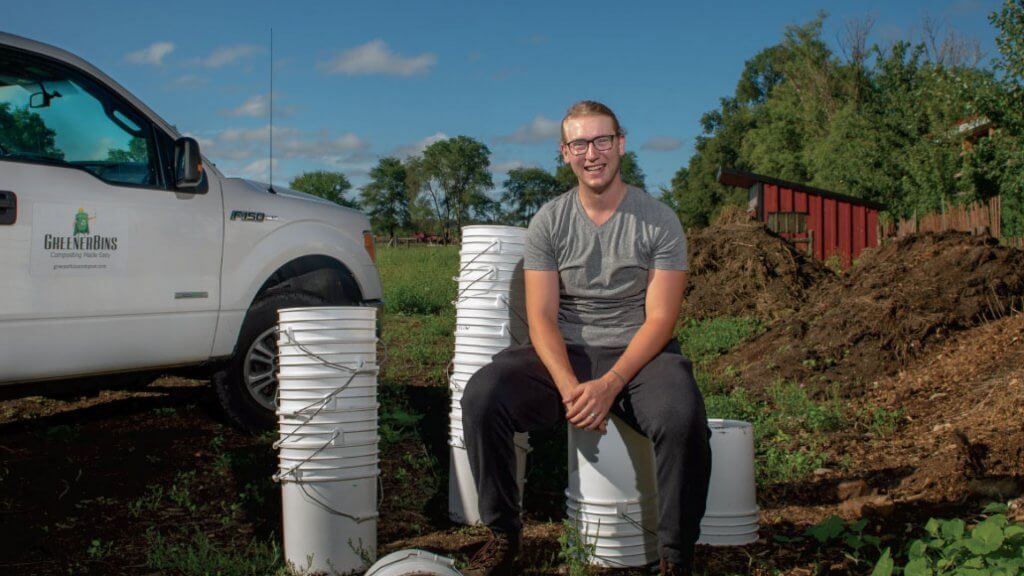 Dane Fader didn’t always know he wanted to be an entrepreneur, but he did know early on that he was going to make a difference in the world. “I wanted to actively be doing work that would positively impact the negative situation that I was seeing all around me,” said Fader, referring to news about climate change that he kept seeing after the 2016 Presidential Election. Fader, 21, is the founder and CEO of GreenerBins Composting Company, a weekly curbside waste pickup company in Windsor-Essex with residential and commercial compost pickup. Every week, participants receive a bucket to fill with food scraps. The following week, the bucket is picked up and a clean one is left behind. In the final step of this three-step process, compost is given back and the cycle is repeated. In just under three months since the company’s launch, Fader has received wide interest from local residents and companies and has 127 signed customers in Windsor-Essex—that’s over quadruple the goal that Fader had set for himself before launching GreenerBins Composting in June of this year

Though the success seems immediate, Fader says it took a lot more than just three months to actually get the company off the ground. “A lot of people have said, ‘Dane, you basically had overnight success, how did that feel?’ I always say no I didn’t, at all. It took me two years of very hard work and very, very aggressive searching and research to have overnight success. So it took me two, almost three years to achieve that success.”

Fader’s journey started in Toronto. After graduating high school, he enrolled in a musical theatre program where he studied for a year and a half before realizing it wasn’t his true calling. “I had a lot of fun but I was feeling an emptiness that I couldn’t fill with that field. I had a big passion for environmentalism.” It was 2016, and Fader was going from job to job and province to province trying to find fulfillment in the work he was doing. “I wanted something more stable,” he recalled. “I wanted something that was mine.” With the political and environmental climate continuing to change, Fader has his ear to the ground, paying attention to national and international headlines that speak further to his passion. “The rainforest is being cut down, the oceans are filling with plastic and climate change is real. I was thinking wow, this is not good at all,” recalls Fader. His growing curiosity for addressing environmental systems issues eventually led him to enroll at University of Windsor’s Environmental Studies and Entrepreneurship program to learn more. Growing up in Windsor, Fader was aware of the lack of organic waste management systems we had in our community compared to other cities like Halifax and Toronto, where he briefly lived

The process of taking this concept from its ideation stage to execution wasn’t simple. “I moved from Halifax in August and started school in September. I already had the idea but I filled my time with other thoughts and distractions and really blew the idea up to massive proportions—perhaps in an attempt to not start it. I was terrified! It took me almost a year to actually start doing work.” The seed had been planted and Fader continued to mull over the idea but all that changed during one fateful road trip. Fader had agreed to join his professor along with some classmates to a World Wildlife Fund event in Toronto. Surrounded by like-minded peers looking to make an impact in the world through their passion for environmentalism, Fader shared his idea for an organic waste management system in Windsor-Essex. “I told everyone the whole idea was about how to make our campus more sustainable,” says Fader. “I had all the facts and figures, I even had waste audits from the university.” With the support and encouragement of his peers, Fader hit the ground running figuring out just how to make his vision into a reality

His road to launching the business had its naysayers—many people discouraged Fader, reminding him that if the city hasn’t been able to launch a composting program, then what makes him think he could do it successfully? He let his inner voice be his guiding force and ignored the noise around him. “Nothing that anyone said was louder than what I was already saying to myself,” he explains, “so I just took it as another opinion and did it anyway.” His environmental knowledge allowed him to realize exactly what needed to be done in order to make a real impact. When asked about his business knowledge at the time, Fader laughed recalling buying books and devouring them within hours. He took it upon himself to learn every aspect of his business from finance to marketing and everything in between. His passion for environmentalism shines through every aspect of his career—whether he’s in an office or making his rounds collecting compost, Fader does it with a smile on his face

Throughout his journey, Dane has grown from an ambitious student with big ideas to a business mogul with a company that is rapidly scaling. Though his path wasn’t straight and narrow, every bump in his road taught him new lessons and led him to where he is today

“I wouldn’t have changed a thing, not one step, not one of those crappy jobs, not one minute of it.”