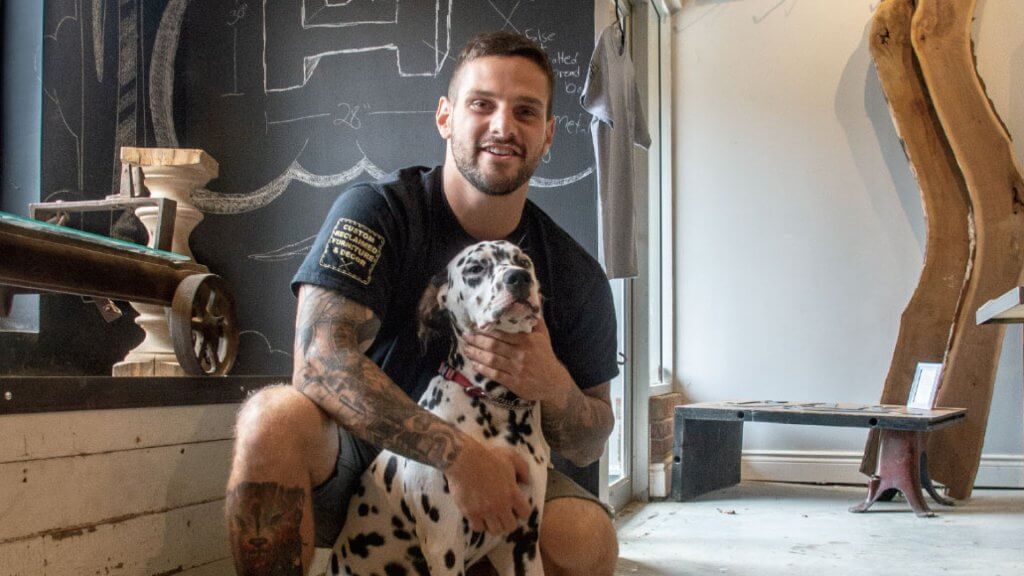 Every year, around the holidays, you’ll often catch the 1964 classic Rudolph the Red-Nosed Reindeer playing on TV. In this stop-motion animated special, Rudolph finds himself on the Island of Misfit Toys, where unloved or unwanted toys live. Their ruler is a winged lion named King Moonracer, who brings the toys to the island until he can find homes and children who will love them.

Michael Difazio is the King Moonracer of Windsor, but instead of toys, it’s trash; instead of children, his customers are reclaim enthusiasts, including billionaire Barry Zekelman.

The old adage “one man’s trash is another man’s treasure” couldn’t be more applicable than to the creations that are dreamed up and brought to life inside Difazio’s Drouillard Street studio. Giving life to the unwanted and forgotten, this space is where the spoils of hours spent “alley surfing” come to discover their new purpose.

Difazio has transformed an old bathtub into a quirky couch. He manipulated a bike to be the eye-drawing supporting beam of a bar. Have any old, unwanted doors lying around? He’ll fix them up and bend them in half to form a coffee table

It started on a random day: Michael Difazio was driving down an average Windsor street, but instead of seeing the curbside garbage as trash, he couldn’t help but see possibility. Sitting in front of him were discarded items with an untold story, a history that deserved more than this anticlimactic end. His gateway drug was window frames.

“I just loved the patina of them,” says Difazio. “I remember bringing them home to my mom’s house, where I lived at the time, and she yelled at me for collecting junk. I had only three tools to my name, but I had an idea.”

patina (pron. pƏ’ti:nƏ) • the surface appearance of something grown beautiful especially with age or use

The unwanted window frames were given some TLC and turned into window mirrors, with reflective glass installed behind the original frame. Difazio, a first-year student at St. Clair College’s woodworking technician program, held an art show to unveil his creations to the world. Only one sold, but he did earn his first commission job.

“From there, everything started happening really fast,” Difazio says.

Getting nostalgic, Difazio remembers his first woodworking shop. It was in his Nonno’s dilapidated garage on the west side of Windsor. While the room was rent-free, he laughs recalling that he had to compete for space with the squirrels living in the attic.

As business feverishly picked up pace, Difazio was eventually driven to lease an entire building in Ford City. He had grown up not far from the area and always had an underlying desire to have a presence there.

The address 1023 Drouillard Road became the new home for Michael Difazio Reclaim Artistry; not just the business but also the man himself. Difazio lived upstairs in one of the two apartments. A self-proclaimed busybody, when he wasn’t working on commissioned jobs in the shop below, he completely gutted and renovated his 1200-square-foot apartment above.

Difazio received many accolades and congratulations for his progress and growth, but he also had to deal with confused looks and constant questioning about his choice to move into Ford City in the first place.

“Ford City used to be in the news all the time and not for good reasons,” he says. “If you were walking around on the street, gangs would jump you. It was gnarly down here. It was like the Wild West.”

Fear never being a deterrent and risk a concept absent from his mind, the troubled past and unknown future of Ford City only intrigued him further.

“The neighbourhood is actually amazing,” Difazio says. “This is my own little slice of heaven and so much different than what people expect.”

The self-proclaimed “loudest” person to invest in the area, Difazio says he believes Drouillard Road has come a long way from those crazy, crime-filled days. The biggest problem in the area currently, he believes, is negligent landlords who have no vested interest in maintaining or improving their properties. He’s on a mission to change that as part of the Ford City Neighbourhood Renewal.

“In a nutshell, the essence of creativity is to look at the world around us, see how it is and imagine other possibilities that are not immediately present or based on our immediate personal experience. Creativity is seeing the possibilities and then trying to make those imaginings into material reality.”

—Agustín Fuentes, The Creative Spark: How Imagination Made Humans Exceptional

In the book The Origins of Creativity, Edward O. Wilson writes that creativity is “the unique and defining trait of our species.” It’s an inherently human characteristic that separates us from all other living beings on earth. Wilson defines creativity as “an innate quest for originality.” If that’s the case, Difazio should adopt it as his tagline, especially when it comes to his “Elephant in the Room” Projects.

“The goal is to create something wild and crazy every month,” says Difazio. “We’ve always had the same idea to create one-of-a-kind unique pieces that people design the room around. You can’t ignore the elephant in the room and people will remember your house because of it. It’s a talking point.”

But, no matter what he creates, Difazio says he likes to build furniture that people can put their feet on without fear of marking it up.

“Markings to me tell stories,” he says. “A brand new table has no past. That’s why I love what I do. I love history.”

What is usually the most frequently used and lovingly marked-up piece of furniture in the home? The dining table. Fitting that they are Difazio’s favourite pieces to design.

“It’s the heart of the house,” says the Italian-raised Difazio. “You had the bad times and good times there. You’d do your homework. Eat there. It’s the centre of home.”

Many of Difazio’s motivations can be dated back to his childhood, including his passion for recycling. He says he’s always felt a responsibility to reduce his carbon footprint. Even in high school, he used his own money to put recycling bins in the building. What teenage boy do you know who would use their own cash to fund the greater good? It takes a special soul to see beyond oneself, especially at a young age.

“Back in the day, things were built so well so you wouldn’t have to buy it again,” he says. “The economy now is based on throwing things away. I’ve always just had this weird sense to do something about it. That’s why my creations are built to last.”

Want to check out some of Michael’s work in the wild? He’s done projects at Frank’s Brewery, Parks & Rec Gastropub and Sports Bar, and Grand Cantina. Online you can see his full portfolio, including commissioned projects via www.michaeldifazio.ca. In real life, visit his storefront and workshop at 1023 Drouillard Road.

Focusing on the task at hand: An Inside peek at the life of Matt Marchand