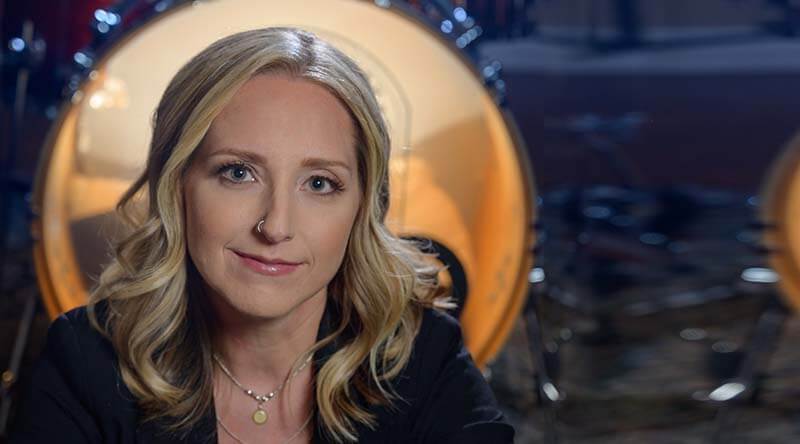 If you’ve ever attended a live concert, you’ve probably noticed the seemingly limitless energy exuded by the band’s drummer; a reliable timekeeper who lays the foundation of a song and well, looks pretty cool doing it.

Being a drummer might sound like a dream job, but the truth is it’s not unlike any other physically demanding occupation. Sure, there are a few more perks than a traditional 9 to 5, but like anyone who engages in strenuous tasks, drummers run the risk of developing serious repetitive strain injuries; resulting in pain, weakness, numbness, and tingling.

Dr. Nadia Azar wants to change all that.

Over the past four years, the University of Windsor kinesiology professor has become a “rock star researcher” of sorts; studying the physicality of drummers and collecting data on heart rate, energy expenditure and the musculoskeletal disorders they suffer from, including carpal tunnel syndrome and tendinitis.

Her hope is to discover how and why these injuries occur, and to help the next generation of drummers avoid potential career-ending health issues.

“I did some digging and was surprised to find there was really no research done on drummers or drumming related injuries,” she says.

While Azar’s research began in 2017, her fascination with the drum kit dates back to her youth. She first developed an interest for drumming as a child in the school’s band program, but it wasn’t until she was a teenager that she actually learned to play; practicing a few songs on a friend’s drum kit over summer vacation.

She didn’t pick up a set of drumsticks again for about 10 years; occasionally playing around at home on her husband’s drum kit. Both he and Azar’s brother-in-law are avid percussionists.

“Out of respect for those who actually have this as a craft, I wouldn’t call myself a drummer,” she laughs. “I’m very much an amateur.”

Through her research, Azar has been able to combine her passion for music with her background in human kinetics and biomedical engineering. It was Azar’s brother-in-law who initially proposed the idea of studying drummer movement.

“Years ago, he had brought it up and kind of put it on my radar,” says Dr. Azar. “It sounded very intriguing to me, but I was busy with other research projects at the time.”

In the fall of 2016, Azar’s interest was reignited while attending a concert for the rock band, Dream Theater,  with her husband.

“I was watching the drummer, Mike Mangini, play. He’s just so dynamic behind the drum set,” she recalls. “I leaned over and said to my husband, ‘I’d love to get Mike into my lab and hook him up to all the equipment and study him.”

Coincidentally, about a week after the show, Mangini posted a status on Twitter about the physical demands of drumming and how sore he was after a recent performance. Azar saw the Tweet and replied to Mangini, telling him what she did and that she’d be interested in studying him.

“I thought, ‘I can’t let this slide, I have to say something,” says Azar. “I tweeted back at him, not thinking he would reply but he actually did.”

The pair began chatting through Twitter and made plans to connect over Skype.

“That sparked it from there,” she says.

Azar started her research by putting together an online survey, asking drummers how long they’ve played, if they’d received any formal training, and if they’ve sustained any drumming-related injuries. Of those who had received formal training, she wanted to know if it included any education on injury prevention. Over 800 drummers from around the world participated in the survey.

“The response was incredible,” she recalls. “I got some really good data from that.”

Azar also began working with Mangini to obtain biometrics; providing him with equipment he could wear on stage to measure how many calories he burned during a show.

Jeff Burrows, Windsor-native and drummer for The Tea Party, also caught wind of the research and was interested in becoming a part of the study. He invited Azar to bring her equipment and join him for a few shows in Toronto so he could wear the equipment and compare the findings.

Azar published the data from Mangini and Burrows on social media and received inquiries from several  other drummers interested in taking part in the study.

Azar will continue that portion of her work once live performances resume.

She also plans to interview 30 music instructors to discover if they offer their students formal training on preventing playing-related injuries, a study she recently received a $20,000 USD grant from the GRAMMY Museum Program.

“Part of my job as a professor includes finding money to fund research projects,” explains Azar, noting that she applied to the GRAMMY Museum’s funding campaign after she had collected a solid foundation of data and published some preliminary findings.

Some of those findings include feedback from her initial survey. One trend she noticed was that drummers who received professional instruction and were given some information on injury prevention reported a lower rate of injury than those who hadn’t had any specific formal training on injury prevention.

She also notes that 81% of the drummers in the study reported taking formal lessons, but less than half of that group had also received training on injury prevention.

“I thought that was really fascinating,” says Azar.

Azar observes that in her study, it seemed to be the older generation of drummers that weren’t taught any mitigation tactics; the younger generation appears to have learned more about proper technique from their instructors.

“I’m trying to identify the barriers and facilitators for including injury prevention education in their curriculum,” she explains. “Is it because they (the teachers) don’t have the training themselves? Is it because they don’t know where to get the proper information? What are the reasons why?”

Whatever the case may be, says Azar, the goal is to help provide information to those professionals or advocate at a higher level for better resources in instructional settings.

“I think something more systematic might be needed, in terms of the instructors themselves having the knowledge,” she explains. “My suspicion is that they don’t learn about it in their own training, and it just becomes very difficult to learn about it on the job.”

Azar wonders if perhaps there has to be more emphasis on in-depth training as far as a more physical, athletic-type warm-up being taught and practiced before a drummer even gets behind the kit.

“My data on injury suggests that whatever instruction they are getting is not enough. Even the group that did get the training, the injury rates were still high,” she explains. “That’s why I’m interviewing the instructors. I want to know what they need to make this part of their job easier.”

Although the GRAMMY Museum grant was announced at the end of June, Azar says there is still a significant amount of development to be done behind the scenes before the study even begins. Once she receives approval to complete the study from the university’s research ethics board, she’ll begin developing questions for the participants and recruiting drumming instructors to interview with help from The Percussive Arts Society.

Azar plans on presenting her findings at at least one conference and publish the study in a peer reviewed academic journal.

“They wanted to know, ‘what are you going to do to get this out to the public?’” says Azar, noting that she intends on sharing the findings on social media.  She’ll continue to publish articles on the Drumeo Beat (online blog), as well as discuss the data on a segment of Drum Talk TV, a popular web series for drummers.

She’ll also publish the study under an open access license, meaning it’s accessible to the public to download and read for free.

“People need to learn about this to enhance the longevity of their careers,” Azar says. “What a great way to start impacting the rate at which drummers develop injuries. If we can teach them how to avoid them in the first place, then that’s ideal.”