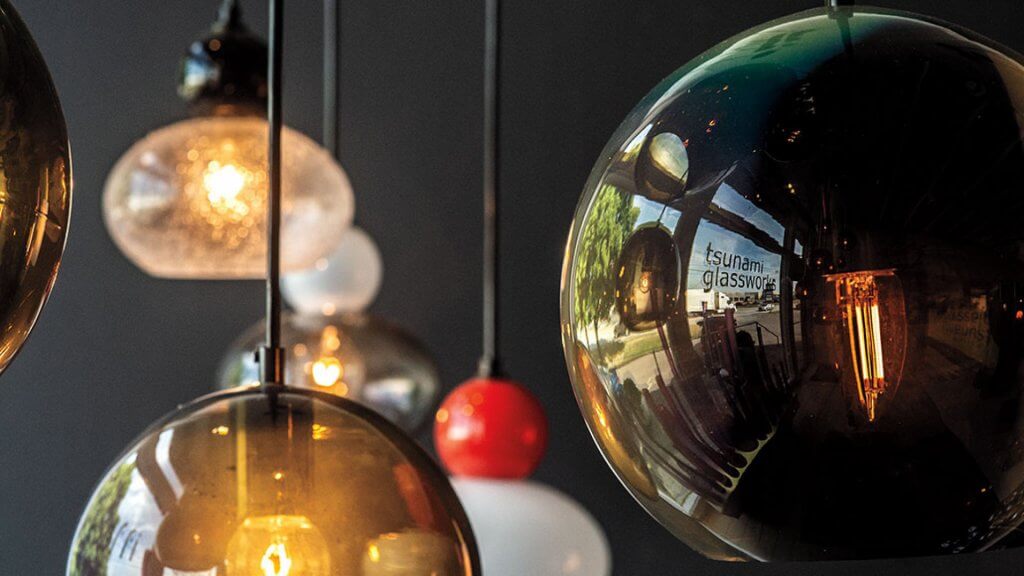 It was the middle of December in Montreal. He was sitting alone inside a dimly lit bar when he first laid eyes on her. She was out celebrating with her date and others after an art glass exhibition at a nearby gallery. She stood up and walked towards the bar, catching her first glimpse of him and, in a move that was very unlike her, she sat down and introduced herself

Kris Gene and Eva Milinkovic shared an instant connection that day, and today share the same passion for the art of glass blowing. They have two sons—Max, who is 10 years old, and Alex, who is four. They live a quiet but busy life that is all but ordinary

Kris was born and raised in Windsor and Eva in Toronto

The two have spent time living and studying in other Canadian cities before coming back to Windsor to start their business as well as their family. They learned their craft at Sheridan College and each graduated with a Bachelor of Craft and Design (Glass) degrees

Since childhood, Eva has always been intrigued by this form of art and found her passion for it at a young age. “I wanted to be either a glass blower or an astronaut growing up as a kid. Clearly one of them didn’t pan out,” she laughed.

As for Kris, his passion came later. He was working at a metal shop in the city learning how to weld and forge metal with the intention of opening a glassblowing studio with his brother, who also graduated from the same program at Sheridan.

But as his brother finished, he decided he no longer wanted to do that. Kris however, had already begun collecting equipment for a workshop.

“I figured I would have to go to school and learn how to do it myself,” he said. “So, I dropped everything and went to school for glass blowing.”

It’s not often that two people meet and share the exact same interests or ideas. As a couple in the same field of work, it only made sense for Kris and Eva to start a business together. They wanted to bring an edgy and bright style of expression into the design industry by embracing simple and clean shapes from hand-blown glass for both retailers and designers

It was a slow process at first.

As artists, it’s not easy to become established right off the bat. It involves a lot of peddling your own work—which they did until they began attending wholesale shows in Philadelphia, where gallery owners were placing orders on the spot. Eventually, stores such as Barneys were carrying their art, which was an impressive accomplishment, but their passion didn’t lie within retail

“We made the decision to get out of retail and start working with design firms and architects,” she said. “We began putting feelers out to the hospitality market and attended tradeshows specifically for firms that would specify you for certain projects. We also knew, Canada was too small, North America was too small and that the company needed to be an international entity.”

Because there is such a niche demand for art glass, a lot of their pieces are exported to other countries where there is a higher demand for the art. Working with architects and design firms such as Studio Munge, Tsunami has been shipping their pieces to places such as France, Dubai, Hong Kong and more.

“Starting out, the majority of our sales were based in the U.S. but the firms we are working with work internationally, so we’ve developed these contacts all around the world,” he said. “After about five years our business started happening in Canada—specifically in Toronto.”

Over time, they’ve acquired an extensive list of clients and have maintained great relationships with those clients

“We really care that everyone’s happy, our work is shipped on time, nothing is broken and the client is happy with the colour or design,” she said. “That plays a big role in being professional with these big companies who expect that level of professionalism and craftsmanship.”

Owning a business with your partner can be challenging but for Kris and Eva, there’s no competition between the two—as business partners or as husband and wife. Life has brought on many stressful situations but together they’ve learned to work through whatever comes their way and move on

“I’ve had people talk about how we are married and what it’s like working together, but I can’t imagine working with anyone else,” she said

Each has their own skill sets so there is never a competition between them. Eva takes care of the company’s marketing and Kris tends to build all of the equipment

“I think it’s about intuitive strategy and with the two of us, we balance things out,” she said

Outside of work, they spend a lot of time with their kids and finding new hobbies to keep life interesting. Eva enjoys making art with her two sons, which can be found hanging around Tsunami’s showroom and workshop. At home, Kris is the master chef. He’s always looking to try new things and cooking allows him to do just that—making his own wine, meat and recently honey

Date nights will sometimes consist of finding a babysitter and going back to the shop, not to work but to relax. It’s their home away from home and they built their shop with that mentality—a second home, not only for them but for their employees. They wanted it to be a place where their employees would feel comfortable. Their staff is their extended family

“I think with the products we make and how intimate the projects are with our clients, it lends itself to a tighter and closer working environment,” she said. “The jobs are big but the focus is intense so we all need to be working in sync to get the job done. We’re all in it to make the company better. It’s always changing and growing.”

“Each one of the team is an expert in their field. Our crew puts their heart and soul into every item that is produced here and then gets shipped out all over the world,” she said

A typical work day consists of multiple projects being worked on at the same time, which can be chaotic and stressful at times

“The only way to deal with challenging obstacles is to go around it, over it or through it,” Kris said. “Our company has many facets to it and that’s to facilitate deflecting these obstacles. For example, if one of our items isn’t functioning properly, there are three other items we have on the back burner or are developing to keep the business going.”

Their biggest challenge is time constraints and working against them. For example, a project they are currently working on has taken over a year for all of the design approvals to be met. The hotel has a set opening deadline, which gave them four weeks to fabricate and install a 250-piece wall installation. It’s challenges such as these that are the nature of their job

It’s incredible what can be done in such a small space. Together they work so closely with one another but are also very concentrated on their own tasks. As Eva says, they work hard and play hard. Kris constructed a meat smoker from an old glass mold, which now provides food for hangouts in the shop

“We usually try to do dinners here on our smoker or fun things like cook lobster in the hot shop,” she said. “And there are the occasional after-work beers.”

Eva and Kris began their journey with Tsunami back in 2005 and the company has really grown since. Now they have their own lighting company, Soffi Lighting. The name Soffi was derived from the word soffietta, a tool consisting of a metal tube attached to a conical nozzle. The nozzle is used to block the mouth of a glass vessel so it can be inflated by blowing into the tube

As a whole, the company has the capacity to put out 300 units in a matter of eight weeks, which allows them to take on so many projects and produce such fine art

“I think the best part about our business is that we’re in it for the right reasons. It’s not a job, it’s something we do and something we’re really good at,” she said

The love and passion Eva and Kris share is unwavering, not just for one another but for their business as well

The Pandemicist at Home: How Dr. Wajid Ahmed stays sane in the time of Covid-19