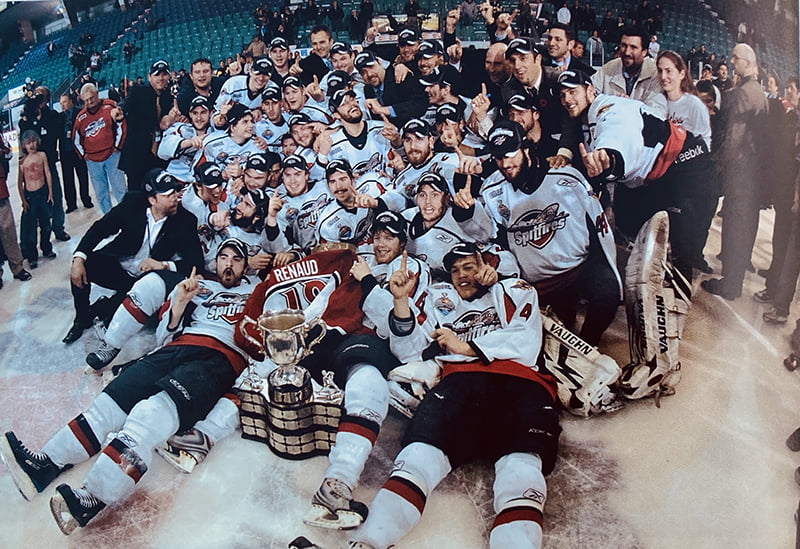 Seventy-five years is a long time to be doing something right. That’s how long it’s been since the Windsor Spitfires were first representing the city, supplying this area with the best junior hockey has to offer.

Three times, the Memorial Cup has been won by the Spitfires. Twice, the team has played host to the tournament that determines the champion of the Canadian Hockey League.

Windsor has contributed a vertiable who’s who of elite NHL stars. Ed Jovanovski (1994) and Taylor Hall (2010) each were the first player chosen in the NHL entry draft. Hall won the Hart Trophy as NHL MVP. Adam Graves was a Stanley Cup champion and an NHL 50-goal scorer. Glenn Hall, Terry Sawchuk, Marcel Pronovost and Al Arbour are among the Hockey Hall of Famers who cut their junior hockey teeth as Spitfires.

Gordie Howe’s brother Vic and Wayne Gretzky’s brother Keith were both Spitfires. Even Don Cherry played for the Spits.

Several Spitfires grads have gone on to win Stanley Cups, beginning with Pronovost and the Wilson brothers, Johnny and Larry, with the 1949-50 Red Wings to Mikahil Sergachev the past two seasons for the Tampa Bay Lightning.

Today, the Spitfires are considered among the cream of major junior hockey franchises. Like most major accomplishments, though, it started out quite modestly.

On May 1, 1946, a press conference was called in the city, and there was big news on two fronts.

The Spitfires, up until then a junior B squad, were entering the Ontario Hockey Association’s Junior A series. The club announced the hiring of Ebbie Goodfellow as coach. Goodfellow was a longtime standout for the Detroit Red Wings. He’d won three Stanley Cups and was named the Hart Trophy winner in 1939-40.

“With Goodfellow at the helm, we are hoping to be able to give Windsor hockey fans the best teenaged team they have ever seen,” Spitfires general manager Lloyd Pollock told the Windsor Star.

Yeah, Ebbie was kind of a big deal. Unfortunately, his team was not.

In those days, junior teams affiliated with one of the six NHL clubs, who then supplied the talent to fill out the roster. Windsor had arranged no such affiliation.

“We had about four guys from out of town and the rest of us were area kids,” original Spitffires defenseman Dick Hayward recounted to the Windsor Star.

Opening night, the Spitfires would face the Memorial Cup finalist Toronto St. Michael’s Majors. They were affiliated with the Toronto Maple Leafs.

“St. Mike’s, nearly half of them turned pro after that season,” Hayward said.

The 4,062 who crammed themselves into Windsor’s barn saw carnage. Led by Hall of Famer Red Kelly, the game finished 15-0 in favor of St. Mike’s.

The Red Wings were looking to relocate their Galt junior club. Pollock was friends with Detroit GM Jack Adams. On June 13, 1947, the two announced that going forward, Windsor would be an OHA affilate of the Red Wings.

That first season with Detroit chattel, Windsor’s roster featured seven future NHLers. The Spitfires led the league with 231 goals and finished first overall, reaching the OHA finals before losing to the Barrie Flyers. Pronovost, a Spitfires defenseman, felt the title was lost the first week of November, when the Red Wings opted to turn Spitfires goalie Sawchuk pro.

“If we keep Terry, we go all the way,” Pronovost explained.

The Spits reached the league final again in 1949-50, losing in six games to Guelph. The following season, Windsor goalie Glenn Hall won the Red Tilson Trophy as the OHA’s most outstanding player.

However, the first edition of the Spitfires would come to a shocking end. On June 5, 1953, the Red Wings announced that they were relocating the team to Hamilton.

Rebirth Of The Squadron

The Spitfires were reborn as an OHA Jr. A franchise in 1975. Similar to the fate of the first edition of the club. Windsor was smacked 10-1 by the Oshawa Generals in the season opener.

By 1979-80, the Spits were playing in the league final, but they were swept by the Peterborough Petes

The following season, forward Ernie Godden made league history. He scored 87 goals, a total that remains the OHL’s single-season mark. “It was an unbelievable season and I’m convinced the fans at Windsor Arena played a big role,” Godden said.

In 1984, Peter Karmanos purchased the club, renaming them after his company. The Windsor Compuware Spifires were born.

Karmanos brought in leaders with NHL experience. Jim Rutherford was GM and Tom Webster the coach. In 1987-88, the Spitfires, led by Graves, the Shannon brothers Darryl and Darrin and Kelly Cain, dismantled the OHL. They won a club-record 16 successive games. Windsor posted an unprecedented perfect 12-0 playoff slate, sweeping the Petes to capture the club’s initial OHL title.

For the first time ever, the Spits were heading to the Memorial Cup in Chicoutimi, Quebec. Windsor would sweep through the round robin. All they need do was complete another 16-game win streak and the Memorial Cup would be theirs.

Alas, it was not to be. The Spitfires grabbed an early 3-0 lead before the WHL champion Medicine Hat Tigers rallied for a 7-6 victory.

“For the longest time, I was crushed when we didn’t win,” defenseman Brad Hyatt recalled. “I couldn’t talk about it for years, because it was so disappointing to come so close and fail.”

Windsor’s fortunes took another unprecedented turn for the good when former NHLers Bob Boughner and Warren Rychel combined with Pete Dobrich to purchase the Spitfires in 2006. Boughner would coach, with Rychel serving as GM.

Within two years, they’d assemble the best team in the OHL and in December of 2008, move into the state of the art WFCU Centre. First, though, the team would need to overcome heart-wrenching tragedy. Team captain Mickey Renaud, whose dad Mark played with the 1975-76 Spitfires, died suddenly of a rare heart condition on February 18, 2008.

“There’s not many players who come through that dressing room that share the qualities of Mickey,” Boughner remembered. “Mickey will be our captain forever in spirit and memory.”

The 2008-09 season saw Windsor dominate the OHL. The Spits whipped the Brampton Batallion 4-1 to earn the OHL title, led by playoff MVP Taylor Hall. They were off to Rimouski for the Memorial Cup.

This time, it began badly for Windsor and ended wonderfully. The Spits lost their first two games of the tournament. A 2-1 won over WHL champion Kelowna got Windsor into a tiebreaker game. The Spits rallied from a 4-2 third-period deficit to beat Rimouski 6-4. Adam Henrique’s OT goal beat Drummondville in the semifinal.

Up next was a rematch with Kelowna. It was no contest. Windsor raced to the 3-0 lead, winning the city’s first Memorial Cup title via a 4-1 verdict. The Spits were the first team to start a Mem Cup 0-2 and win the title.

“We took the hardest way you could to the Cup,” Boughner said.

“It was just meant to be,” added Hall.

A year later, Windsor would join a select group of clubs by winning back-to-back Memorial Cups. Again, though, the club’s resiliency would be tested.

The 2009-10 Spitfires were a powerhouse squad. They could ice a first power-play unit consisting entirely of NHL first-round draftees – Taylor Hall, Greg Nemisz and Zack Kassian at forward and Ryan Ellis and Cam Fowler on the points.

In the OHL Eastern Conference final, Windsor fell behind 3-0 to the Kitchener Rangers. But just when the back-to-back dream looked dead, the Spits won four straight to eliminate Kitchener. Then they swept the Barrie Colts in the OHL final and went 4-0 at the Memorial Cup in Brandon, outscoring their opponents 28-9 in the tourney.

“Two puts you in a category all your own,” Boughner said. “I think this team could be mentioned in the same breath as the greatest junior hockey teams Canada has had.”

In 2017, Windsor won the right to play host to the Memorial Cup, gaining automatic entry in the tournament. Eliminated in the first round of the 2016-17 OHL playoffs, the Spitfires would sit idle for more than a month.

Spitfires coach Rocky Thompson put his club through a rigorous 44-day training regimen. They came to the tournament in top condition, going undefeated with wins over Erie (twice), Saint John and Seattle.

A 4-3 victory over the Otters in the final was earned on Aaron Luchuk’s third-period goal.

“It’s so special winning at home,” Windsor goalie Mikey DiPietro said. “The crowd was so loud and played a big part in it, threw the momentum in our favour. They’re part of this, too and helped us bring it home.”

Change is the inevitable reality of junior hockey. As the Spitfires move toward the club’s centenary, there’s plenty to be excited about.

There are plenty of happy memories to look back upon over 75 years of Spitfires hockey. There also looks to be a bright future ahead.