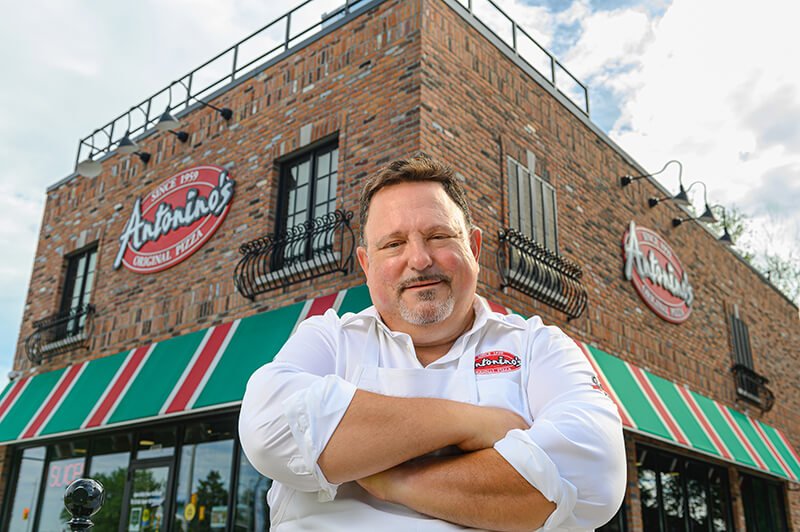 Not even a worldwide pandemic could curb this city’s appetite for our beloved Windsor-style pizza.

Despite two and a half years of rolling lockdowns and changing health regulations, Antonino’s Original Pizza owner Joe Ciaravino says his business was able to weather the storm, in large part because residents just can’t seem to get enough of that magical combination of cornmeal crust, Galati cheese, and shredded pepperoni.

“I don’t know where all these pizza eaters are coming from,” Ciaravino laughs. “It’s like the demand for pizza in this market just seems to know no bounds.”

Ciaravino remembers the early days of COVID and how Antonino’s three locations looked for ways to keep their customers and staff safe by minimizing in-person interactions through contactless pickup. Customers would call in and place their order over the phone, paying via credit card or e-transfer. They’d then pull up to the pizzeria when their order was ready and an Antonino’s employee would bring it out and place it in the customer’s trunk, thus creating a system with virtually no points of contact.

“The contactless pickup was actually a response to two things,” explains Ciaravino. “Number one, we wanted to keep our customers safe and minimize risk. And number two, we had some employees who didn’t feel comfortable coming into work. We employ a lot of youngsters who live with older or high risk parents.”

Before the system was implemented, Ciaravino says they tested out the process with the parents of the employees who had safety concerns.

“Once they saw how it worked, not only did they allow their kids to come back to work, one parent asked if we’d hire their other son. So that was a sign that we got it right,” he recalls.

Although all three locations are back to walk-in pickup orders, Ciaravino says they still accommodate customers who prefer to have their pizza brought out to them.

“We’re taking baby steps,” says Ciaravino. “We were probably one of the last places to go maskless for our staff too, just because the kitchen can get so crowded.”

That measured approach to reopening for “business as usual” has paid off. The popular pizzeria is now in the process of expanding to service even more passionate pie enthusiasts with two new locations slated to open by the end of the year; one in Leamington in the former Blockbuster Video building, and the second in Windsor’s east end at the corner of Wyandotte street east and Thompson Boulevard.

“We’re hoping to open up before the end of the year; renovations are underway, equipment is on order, and we’re full steam ahead,” shares Ciaravino. “It’s a race to see who opens first. They’re kind of neck and neck right now.”

The Riverside location will be takeout only, and the larger Leamington store will feature a self-service dining room similar to the South Windsor location.

“It’s the largest Antonino’s store to date so they’re going to be able to handle quite a bit of volume,” shares Ciaravino. “It’s a high traffic area and I think the dine-in there will be big, especially for selling slices.”

Ciaravino adds that they’re currently looking for staff for both the new and existing locations to help keep up with demand.

“Our South Windsor location, I would venture to say is the highest volume pizzeria in Essex County,” he says. “I believe we’re the only ones who run six deck ovens regularly. In fact, we could probably use eight.”

Even with the opening of the new locations, Ciaravino says he doesn’t expect their South Windsor, Tecumseh, or Lasalle stores to slow down at all.

“The more pizzerias you open, it seems like the more pizza eaters you create,” he laughs. “It really is something else in this city.”

Windsor-style pizza is definitely having its moment in the spotlight right now, especially with the highly anticipated streaming release of “The Pizza City You’ve Never Heard Of” documentary by former Windsorite George Kalivas and director Tristan Laughton.

Ciaravino appears in the film, sharing the origin story of Antonino’s and his parents’ journey as some of the first purveyors of the iconic Windsor-style pie.

“It was touching. It really moved me; I’m glad that George took on this labour of love and I think all of us in Windsor owe George and Tristan a debt of gratitude for what they’ve done. So much work went into making this film.”

“The Pizza City You’ve Never Heard Of” will be available to stream on the CBC Gem app September 16th, which is available through AppleTV, Amazon Firestick or directly through the app. The film will also be televised nationally on CBC September 17th and broadcast an additional five times after that. American viewers can catch the documentary streaming September 19th on the Tastemade Network, available on Roku, Amazon Firestick, Hulu, and more.

“I’d like to see Windsor pizza put on the map right up there with Chicago, New York, and Detroit,” asserts Ciaravino. “We have a really unique product and it deserves the recognition.”