David 'Derkz' Derkatz has taken his painting skills from the trainyard to the mainstream
Author: Devan Mighton
Photographer: Joseph Drouillard and Trevor Booth
1 year ago
|
No Comments
Share On 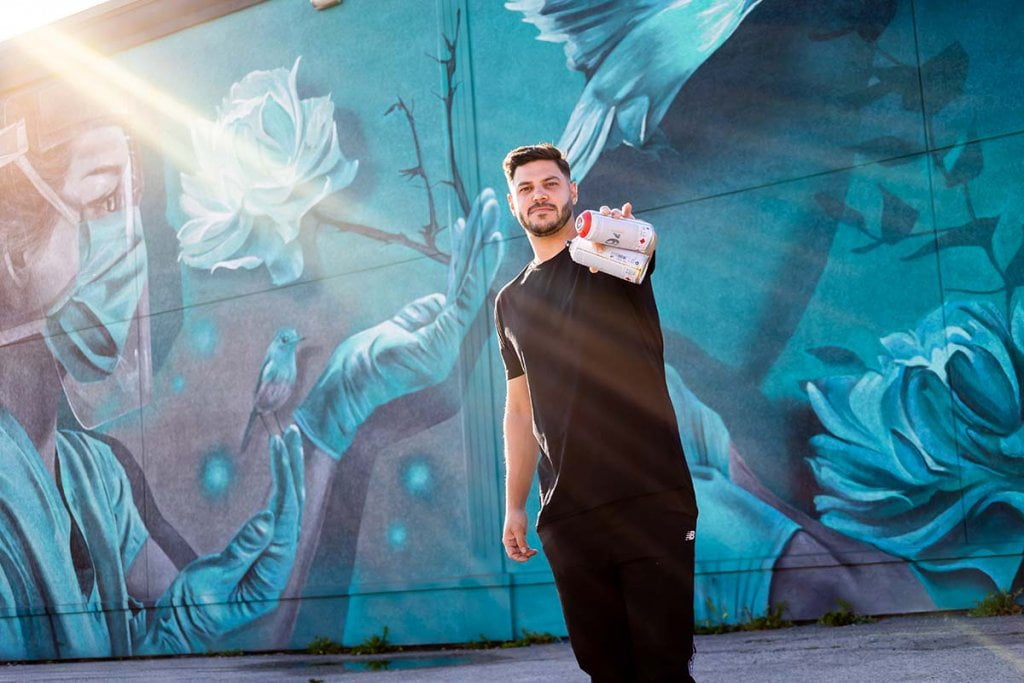 Four in the morning and there isn’t a soul in sight. A young man stands, shivering in the cold, before a fresh canvas. Between peeks over his shoulder, eyes peeled for railway police, he rhythmically rattles his spray can. His eyes scan the rusty hulk of the train car and all he sees is potential.

The fumes irritate the lining of his nose, but the smell is intoxicating. As the can hisses like a snake under his finger, a new world is created on the cold steel. The colours spring from his hands – blues, yellows, greens, reds – and his thoughts are transferred from mind to matter.

Only hours later, the idling cars on their morning commute, stuck waiting for an inconvenient train to cross Walker Rd., will get a fleeting glimpse in their headlights of this artist’s newest creation.

Almost a decade later, this spray can outlaw has gained international acclaim for his outstanding mural work. David ‘Derkz’ Derkatz’s work spans the continent, with jobs as far away as Las Vegas and Los Angeles, hired by celebrities like Jake Paul. However, despite all the pan-continental acclaim, Derkz managed to save his magnum opus for his hometown Windsor.

“We were in the midst of the pandemic, this time last year, and I was mulling around some ideas in my head,” explains Derkatz. “I wanted to do something like a large mural for the community, especially the healthcare workers and essential workers that were giving their whole lives away to keep us safe.”

Seemingly overnight, on the corner of Tecumseh and Walker Rd., a mammoth mural, capturing the gratitude of a community for those who have kept us safe, came to life. Shades of blue and green splashed the profiles of a doctor and nurse in an awe-inspiring full-wall painting on the north wall of Windsor’s fabled The Penalty Box restaurant.  The mural soon gained international attention and praise for its touching tribute to Windsor’s front-line workers. “My mom was an ICU nurse at Met for about 40 years, then she transferred to another hospital for a bariatric clinic – so, I’ve always been around nursing and healthcare and I wanted to give back to the community,” states Derkz. “My sister and her husband are nurses in the States and they are right on the front lines as well.”

However, how did a trainyard tagger reach such heights?

Born and raised in Windsor, Derkatz, a graduate of F.J. Brennan Catholic High School, saw his future – like many in his family – in the healthcare field. “I was in college for health sciences because I wanted to be a paramedic at one point,” recalls Derkatz. “A year after, I switched over to graphic design.”

“I was never really creative at all through elementary school and high school until I picked up on graffiti. I painted a lot of illegal stuff like streets and underpasses and a lot of freight trains. I got hooked on that and got hooked by the graffiti bug. I picked up a passion for wanting to paint a lot – solo missions at night at the train yard. There’s just something about it that really resonated with me for some reason. I got into art through graffiti; painting years and years of illegal graffiti and then I transferred my skills from spray paint and gained can-control, switching it over into murals and street art.”

His painting took over his life. In his second year at St. Clair College, he found himself spending more time painting in Detroit than attending his studies. Something had to give – and it definitely wasn’t going to be the painting. “I was always the kid, sitting around, tagging my papers and drawing in class – I was that kid,” he explains. “I knew graphic design wasn’t for me and I just wanted to do traditional art instead of sitting behind a computer and doing menus and computer designs.”

Like a masked superhero, Derkatz was soon tagging under the cover of night and making use of a pseudonym – Derkz. “I fell in love with having an alter ego or an alias that no one knew me as,” he admits. “I was painting, and I was getting recognition through my graffiti and no one knew it was me. It was an outlet for me, in a way, to express myself, while also a way for me to have some solitude.”

He embraced the addictiveness of his brazen form of self-expression. “Being in a trainyard, solo, there’s just something about painting raw steel at five in the morning that I just love – just hearing the spray paint come out of the can.  There’s a multitude of things there that are just a big outlet for me,” Derkatz explains that his tagging grew more and more elaborate and slowly transitioned into full-blown mural painting.

Derkz recalls that his first paid mural was commissioned around late 2011. He let his name grow organically, through word of mouth. He didn’t bother with marketing or a website. He let his work speak for itself. “I also wanted to build a portfolio, a solid foundation, before I did the next steps that other people take on too early without having a solid base,” he says. “It’s just like any other discipline, whether it’s your kid in hockey or musicians or dancers or guitar players or anything. The more – thousands of hours – you put into something, whether it be a random gift or a skill you want to develop, it’s all about the hours and committing to that role.”

In the future, Derkz is dreaming big. He has a passion for art in Windsor and has grown as an artist to see his hometown slowly come to life with the colours from his spray cans as well as other ambitious taggers and artists. He says his dream job would be to be commissioned to do a tall hotel or skyscraper, where his canvas could reach dozens, if not hundreds of floors into the skyline. He has already partaken in a number of ambitious projects, including painting full mansions in Las Vegas with a dozen-or-so other artists who were flown in from across the globe. “Just like anything, the bigger the better!” exclaims Derkz. “Massive hotels and the biggest apartment complexes in the world – I want to paint from top to bottom – hundreds of feet and hundreds of stories. That would be the dream job – to literally paint hundreds of levels of floors on a hotel or a big complex. That’s the dream goal for me.”

He explains that as he has progressed in his career, his feelings on painting have evolved. Like any outlaw who has lasted long enough to become accepted, there is a mix of feelings – a longing for his wild roots where his passion sprung from, but also the feeling of acceptance and a licence to enhance his community as best he can. “I do miss the illegal side of stuff, but I still love the process of making and creating a mural, and stepping back and seeing what was once an old dilapidated, neglected building and it turns into something super-vivid and colourful and powerful for the community to like or dislike,” muses Derkz.

To see what Derkz has been up to lately, please visit his Instagram or Facebook for his latest works.