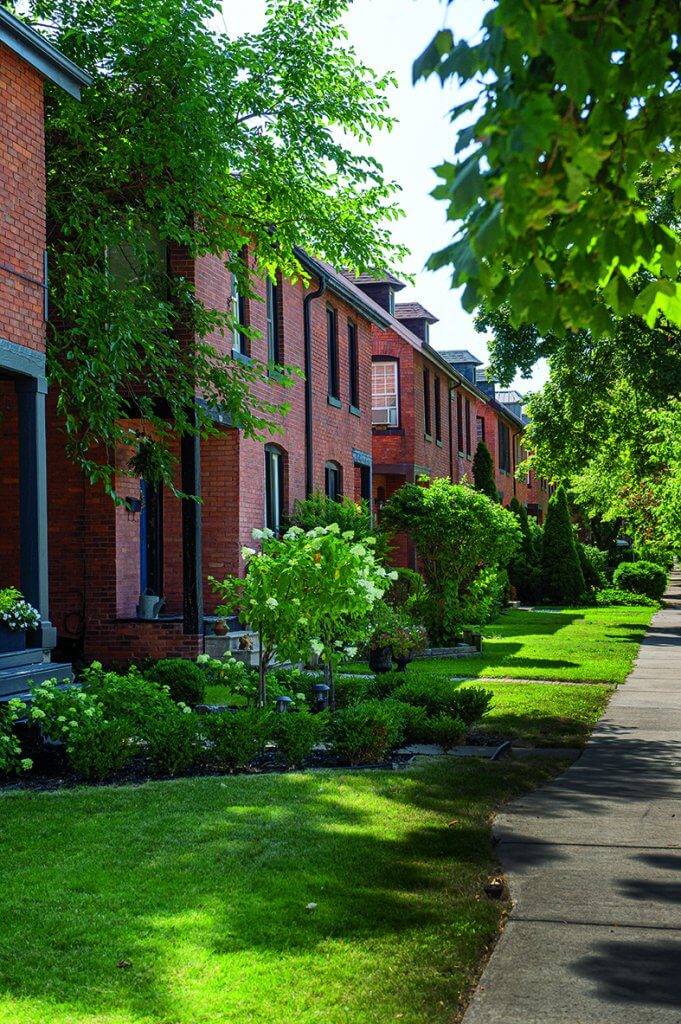 The headline had taken over my timeline. Friends and family proudly shared the article from MoneySense.ca that ranked Windsor in the number one spot with 11% on a five-year annual ROI—a goldmine for any investor. A series of emojis sat under each individual post ranging from big hearts to angry, red faces. People had opinions, and they wanted to share them. Some were thrilled that the infamous South Detroit was known for something other than a classic ’80s rock ballad, while others shared their concern that this would negatively affect residents in an already inflated market.

New homeowners and realtors alike can attest to the fact that Windsor’s market has seen a surge as of late.

“We are up 11.38% this June versus June 2018,” said Deidre Ritsche, realtor and one half of the dynamic duo of BorderCityLiving.ca, a blog dedicated to highlighting local unique, urban living spaces.

She and her business partner, Stephanie Bradt, are part of the wave of Windsorites who left the city years ago to embark on personal adventures and endeavours, but who were drawn back to their hometown—much like the majority of their clientele. “It’s almost like they didn’t realize how good they had it in Windsor until they left, and now they’re back and they’re like, ‘Wow, I struggled in those other cities, I was a small fish in a massive pond,’” said Deidre.

“You can come back and make a difference and that’s what Windsor needs, especially in the urban core.”

That difference is what has helped Windsor flourish over the past few years. With the development of the downtown core, old Walkerville, Ford City, and the expansion of residential neighbourhoods, each pocket in the Windsor region (and surrounding townships) has something to offer. “People are excited to be back here and out-of-towners are excited about everything the Essex County region has to offer,” said Angie Goulet, from Angie Goulet & Associates, a team of real estate agents within Re/Max Preferred Realty Ltd. with over 16 years of experience in the Windsor region. “We have great schools, we have an emerging culture of restaurants and things we can do across the board in our backyard, but we don’t have the problems of a big city. Windsor has been growing at an exponential rate, but the community remains grounded in its roots.”

With the growth of the YQG community came a swell of hometown pride. A quick search of #YQG on Instagram will reveal thousands of photos from young entrepreneurs, bloggers, and residents with filtered snapshots of their favourite local spots. “We’re so Windsor Proud that we started a hashtag series called #WindsorProud,” said Rob Agnew, broker and General Manager of Manor Windsor Realty Ltd. “We couple up with different corporations, individuals, and groups to brag about our town a little bit. It certainly goes out there so people that are thinking of relocating to Windsor can see more clearly the benefits of coming here.”

The heart of Windsor lies in the residents, the ones who feel a duty to make their community one they can be proud of. I had a chance to sit down with three residents from three different pockets of the Windsor-Essex area, who each explained to me what makes their corner of the region special and unique.

Katie Stokes is a local entrepreneur with a home-based business, Blab Media, and a retail shop called WhiskeyJack located on Maiden Lane in the heart of Windsor’s downtown core. As a resident of the downtown area for approximately six years, she understands the importance of economic growth in the heart of the city. “I love the sense of community in the downtown core,” said Katie. “The residents and business owners are always looking out for each other. Every time I read the news there seems to be a lot of negativity towards the core. While we’re an area that’s still growing, we’ve got lots to offer. I also love that I’ve become good friends with the small business owners at the shops that I frequent on a regular basis. There’s a wonderful sense of belonging down here and a fierce spirit because we’re used to fighting for everything we want.”

According to Katie, there are more residential properties developing downtown than there have been in the past 20 years. Deidre agrees, and added, “People are hungry for that walkability and that lifestyle.” As a young professional, it seems like a no-brainer for Katie to make the downtown core her home base but she believes that residents of all ages should consider housing opportunities in downtown Windsor. “I want people to live downtown, experience the area and become invested in its future,” said Katie.

Old Walkerville experienced exponential growth in the past five to six years. As a resident of the neighbourhood myself, I’ve seen the area flourish and become the trendy spot for restaurants, boutiques, and year-round festivals. Paul Brereton has lived in Old Walkerville for nine years. His passion and commitment to the neighbourhood he calls home is undeniable.

“The entire neighbourhood is steeped in history, and you can feel it when you walk around,” he said. “The sense of togetherness and the pride that we all have in our homes, our streets, and the neighbourhood makes Walkerville different. It’s like nothing I’ve experienced anywhere else. I know the names of every neighbour on our street for at least 10 houses in both directions. We even have a Christmas walking tour where we set up refreshment tables in every house and walk between them, sharing stories and catching up on whose kids are going where and doing what. We shovel each other’s walks and mow each other’s lawns when the family is away on vacation, and are welcome on any front porch for an evening glass of wine.”

Walkerville has become one of the more desired areas in the real estate market. With a good mix of residential housing, walkable entertainment, and a flourishing art scene, housing prices have inflated, making it difficult for first-time buyers or even renters to afford the cost of living in this highly-sought-after neighbourhood. “From a financial perspective, our neighbourhood has seen a big benefit from the recent trend in housing prices. Houses are going for above asking in days, if not hours!” said Paul.

Of course, an inflated market has its downsides. “With the good often comes the bad,” Paul admits. “Because of the demand and competition, houses are often being sold without conditions (and inspections) so the mechanism that is designed to ensure quality and safety is being forsaken for dollar signs. It has also resulted in a measurable increase in the number of people knocking on my door and asking me if I’d be interested in selling my house. I just hope that the influx of buyers all have the same passion for our neighbourhood that we do.”

Although the downtown core and trendy areas like Walkerville and Ford City have become highly desired, it’s the suburbs and the surrounding townships that have lured in out-of-town buyers who are looking to swap out the bustling, busy cities for a quieter community.

Heather Parisé and her husband David are a young couple raising their children in Cottam, Ontario, a small town in Canada’s southernmost municipality. “Living in a small town outside of the city affords us the ability to have a larger lot that accommodates our hobbies and lifestyle,” said Heather. “While being in Cottam means that we each have a 30-minute commute to work, the drive is worth the tradeoff of coming home to open spaces. We love raising our kids in a small-town community with lots of amenities nearby, including great parks and Kingsville’s many restaurants. Cottam’s central location puts everything in Windsor-Essex County within reach.”

Touted as one of Ontario’s warmest communities, Essex County offers the allure of small-town living but is situated just minutes away from Windsor’s downtown core and the Windsor-Detroit border. Residents can embrace the best of both worlds while escaping to conservation areas, national parks, or one of the many gorgeous wineries within the region on weekends. It’s no wonder that many new residents are settling in this rural community. “Housing prices in the area have definitely increased. This is positive for those currently in the market but would make it more challenging for first-time buyers wanting to break in,” said Heather. “The size of some county lots in the area can sometimes increase prices for comparable houses located on smaller lots in town.”

Affordability is definitely not the only factor in the recent housing market boom Windsor-Essex is experiencing. Out-of-towners are coming here for the charm, the potential, and the neighbours who are more than happy to share their passion for the area. “We’ve never had so many new house starts,” said local realtor Rob Armitage, from Team Armitage, in reference to Windsor’s growing economy. “We have the highway that they had to build and now they’re moving on to the bridge—it’s good! When we’re working and prices are trending up, as frustrating as it might be to buy in, it’s a good thing.”

An economy that’s allowing investors to purchase properties with little to no risk “is an attractive market here for investors because the gains are pretty healthy,” said Paul Germanese, realtor with Royal Lepage Binder. “Although the values continue to rise about 20% a year—this is the third year in a row where we’re going to hit about a 15% mark at least— it’s still good numbers for them.”

Whether you’re new to the area or not, it’s hard to deny the charm of the Windsor-Essex region. With its small-town feel and big-city drive, it’s no wonder that Canadians all over the country are flocking to our community. While housing prices continue to soar, every realtor I spoke to urged Windsorites to not get discouraged, especially if they’re just breaking into the market. With the inflated market comes economic growth. “The unemployment in this town is lower than it has been in many, many years,” said Rob Agnew, “so that helps people getting into the market and moving up the ladder.”