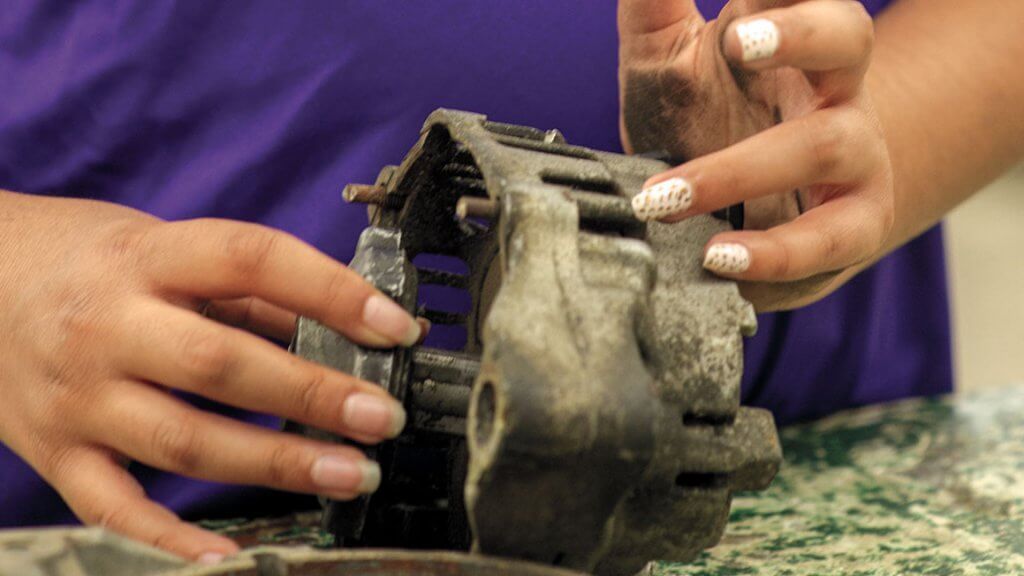 Do you know how to solder? Or change a tire? Or use a metal lathe to create a ring from scratch? I didn’t either until this past summer, when I was hired as a camp coordinator through Build a Dream and the Greater Essex Country District School Board (GECDSB)

Build a Dream, a Windsor non-profit foundation, was founded in 2014 to educate and encourage young girls to try their hand at skilled trades, STEM (Science, Technology, Engineering and Mathematics), emergency response and entrepreneurship.

The camp had two all-girls sections—one in skilled trades and the other in STEM—and an all-gender camp in carpentry. Ten young girls from across Windsor-Essex were enrolled in my skilled trades section. Each morning started with a female mentor who works in the trades. The girls would ask questions ranging from what a typical day was like on the job to what challenges a woman faces in the field.

During one mentor session, Lynn Reid, a general machinist at L&M Machine and Automation, gave the girls her own advice for entering the trades: “Just trust yourself and don’t let others get in your head. You need thick skin to make it in the trades, but if you can push through those first few months you’ll gain the respect, and if your situation is similar to mine, you’ll make some pretty awesome friends.”

The girls were empowered. Once their first instructor and Build a Dream proponent, Ed Kotevich, taught them about workplace safety, they were on their feet and quick to don safety glasses to solder melting metal to pipe.

During the rest of the week, the girls created rings from titanium using lathes, learned how to change tires, check oil and jumpstart a battery and dabbled in graphic design. A couple of parents joined in on valuable field trips to CenterLine and Cavalier Tool where the girls could work on the floor or in the office roles

Sheila Pourakbar enrolled her daughter Niki when she brought the camp to her mom’s attention. She was especially amazed on the last day of camp.

“In the morning when I started my car to drive Niki to the camp, I noticed a light appeared on my control panel. I did not know what that meant and I was about to call my husband to ask when Niki said, ‘Mom, let me see it.’”

Niki explained to Sheila that she had low tire pressure. There was a nail in their tire. That evening, Niki and her dad took care of the problem.

Sheila isn’t the only parent on board. When I asked the parents if they would support their daughters pursuing a job in the skilled trades, the answer was unanimous.

“By all means, if my daughter decides that a skilled trade is what she wants to do, I will support and encourage her,” Villy Pantoucheva Strelkova answers

Before agreeing to join the camp, I admit I was worried. I knew very little about the skilled trades, besides hairstyling through my sister. But I soon realized it wasn’t about what I knew; it was about the openness to learn something new

I worked with Emily Li Causi, a secondary-school teacher who now works at the GECDSB board office. When the Ministry of Education put a call out for experiential learning proposals, she and colleague Angela Ciarlariello-Bondy were able to receive funds for the skilled trades camp

Emily and Angela wanted to support young women growing in the skilled trades because the two understand that women are “generally underrepresented.” If girls are exposed earlier to these areas, then their choice in pathways will lead them to success.

Nour Hachem-Fawaz, one of the founders of Build a Dream, has big dreams herself: she wants to see Build a Dream grow from Windsor to London to across Canada and hopefully North America

When I sit down to first meet with Hachem-Fawaz, she is smiling serenely and confidently. I met her briefly only a few days before when she came on the last day to speak about her foundation. I was in awe. She has an 11-week-old son with her husband of three years. Her eyes are kind and she glows as she talks to me about why Build a Dream is her passion project.

“Being raised in a single-parent household and seeing the struggles my mom went through, and just the challenges she had to experience, has given me more purpose to see this movement through and invest more of my time in better understanding how to shift this work force and make it easier for young women to make a decision regardless of their gender,” she explains.

Before her current job as employer relations coordinator for the office of Co-operative Education & Workplace Partnerships at the University of Windsor, her work at St Clair College and Women’s Enterprise Skills Training of Windsor (WEST) further inspired her to assist women in accessing male dominated industries.

She wondered: if only a small percentage of women were in the skilled trades, what did that mean for the workforce?

At the same time, the federal government had a call to improve economic opportunities for young women. In order to do that, young girls would need to be educated on career opportunities to lead them into economic prosperity.

Hachem-Fawaz then led a committee full of industry leaders: the chief of police, the school board and community organizers. If everyone at the table vowed to commit to change, then the leaders could return to their places of work and shift gender stereotypes.

In addition, the youth committee ran surveys, and found that parents were the number one influencer in career choices and there are gender-associated jobs that girls felt like they couldn’t do because of their gender

With funding from all three school boards—Greater Essex County District School Board, Windsor-Essex Catholic District School Board, Conseil Scolaire Catholique Providence—and partnership with Women’s Enterprise Skills Training of Windsor, Workforce Windsor-Essex and St. Clair College, Hachem-Fawaz and her team launched the first Build a Dream event in 2014. One hundred and forty women attended and a range of workers, from those starting out in their field to those approaching retirement, communicated their long-term success in their work.

In the past four years, the event

Over 1,000 people attended last year’s Build a Dream event with over 60 vendors representing trades companies from across Windsor.

Hachem-Fawaz explains that “companies take pride in a diversified workforce and invest in recruiting more females. A diverse workforce is economically beneficial.”

“With the camps, girls are provided a safe environment to test their skills in a fun way and then decide if they like it or not. It’s okay if you walk out saying ‘I don’t like it,’ but now you’ve made your own decision,” Hachem-Fawaz maintains.

She knows doing this work makes a difference to people’s lives and that feeds her heart. “There was this one girl who was in grade 11 when she came to the first event and she was destined to go to university. Then I gave her a tour of St. Clair College and explained there was an apprenticeship program with free training for 18 weeks and a placement at WEST, a program that’s still running. This girl always loved working with her hands and now she’s an electrician,” she gushes.

When I asked my group of girls why they wanted to join this camp, 12-year-old Simran Parker responded, “There are few females who are working in the skilled trades and we need more. People think it’s only for guys, so females need more empowerment because they can do whatever they want.”

Another student, 12-year-old Davanna Persaud-Hearns, is now considering a job in the trades. “It’s fun and hands-on. It’s very exciting being able to go home and show my family that I can make things out of aluminum and jumpstart a car. I would love to come back next summer and learn even more.”

Most of the girls said that their parents or teachers encouraged them to attend, and they enjoyed learning new skills and making friends. Watching these girls flourish from the first day to the last was such a joy, and learning alongside them was an honour

The Build a Dream event takes place at the Ciociaro Club on November 8. It’s a free event with a surprise keynote speaker. The whole hall is booked so mark your calendars, register online and bring your daughters, nieces and friends

Near the end of my conversation with Hachem-Fawaz, I realize that I’ve never met a female electrician

“Have you ever met a female plumber?” she asks.

I shake my head

“What about female mechanic?”

Hachem-Fawaz smiles. “But you will.

If you come to Build a Dream, you can.”