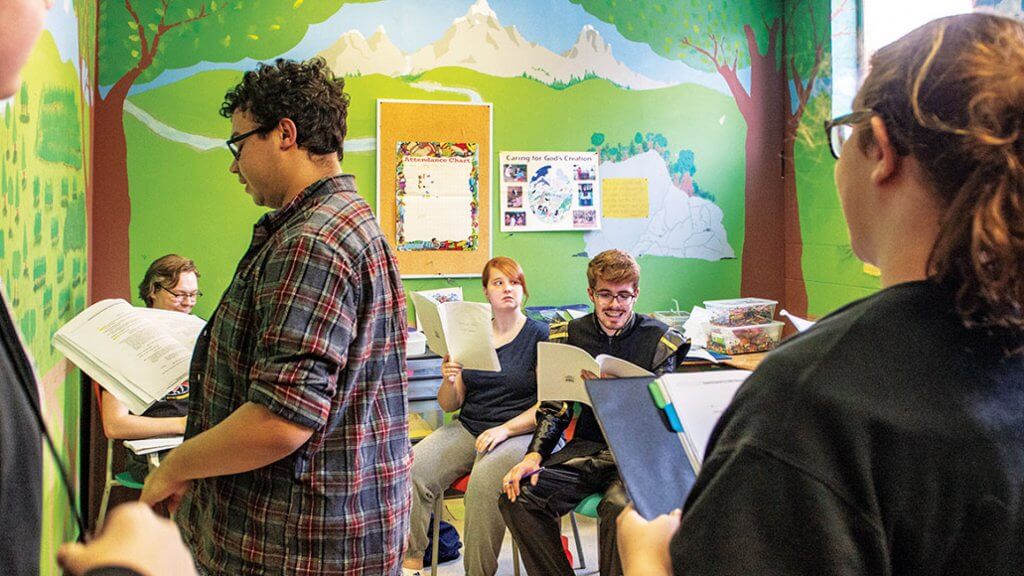 In the midst of a trying period in her life when she was in high school, Katina Visan would repeat the above phrase to herself constantly. Riverfront would be the beacon she looked to each week

“[Riverfront] helped keep me going when times got tough and I want that for other people. I want those kids who don’t have a safe space to have that safe space on Saturdays. It helps keeps them off the streets too.”

Riverfront Theatre Company is non-profit community theatre for young children and youth. Students pay a small annual fee to join and after grade 12, the students retire from the company, but can still volunteer in other aspects. Rehearsals are once a week on Saturdays at the Paulin Memorial Presbyterian Church from 9 to 4, and they rent out the Old Walkerville Theatre for their shows. This year, the company ran a festival called Under Pressure in November, which consisted of plays discussing bullying, and recently completed a Shakespeare Festival. Their next big show is their annual spring musical; this year, they’re performing Mary Poppins. I had the opportunity to direct two shows this year with the company, co-directing an adaptation of Shakespeare’s Cymbeline with Visan.

Visan is 24 years old and about to graduate from the University of Windsor with plans to teach French and English at the high school level. She started at Riverfront Theatre Company when she was 11 years old and she has no plans of leaving any time soon. In fact, in the next few years, when current executive director Kristina Garswood retires, Visan will step up and take her place

In the time she’s worked offstage as a videographer/photographer and now director, Visan’s discussions with parents have cemented the importance of her work with Riverfront

One parent told Visan that her son “never understood friendships and after being a part of Riverfront for a few years, he said, ‘Hey Mom, I finally get it. I finally have friends.’”

She sees the growth in students’ interpersonal and intrapersonal relations and that’s one of the reasons why she continues “to keep going for them.” The fact that the students also feel safe at Riverfront to explore who they are and what they can be in a supportive space is critical to their growth.

When Visan acted for the company, she was cast in Up the Down Staircase and the director gave the actors full artistic freedom. “I decided to make [my character] this goth girl who was struggling through life and eventually she had to run away from school for her own mental sanity. To be able to portray through this character what I was going through internally that I couldn’t portray in my real life actually helped so much. That year was one of my best years.”

And there’s another reason why Riverfront is also special to Visan.

“That’s where I met my husband,” she laughs

Back in 2012, Riverfront staged an original play called Princesses Aplenty. Visan had pulled ligaments in both her legs and was encouraged to use a wheelchair to heal. But she was determined to play the role as she originally imagined, with spunky full-body reactions and physical comedic relief

“Every day before the show I would take my meds so I could do it without too much pain, and I had to take them with food, so Sabin [her husband] was the only one backstage with food. So I was like ‘Hey, can I have some of your fries?’ and he was like ‘Sure, you can have the rest!’ and I wobbled off on my crutches with his fries.”

Her face is rosy recalling the memory. Eventually the two started dating and when Riverfront put on Princesses Aplenty again five years from the time they met, Sabin knew it was time to propose

“When they said happily ever after [at the end], one of the kids said, ‘Wait! There’s one more!’ Two kids came to grab me and he went on stage and it happened right there. Of course I recorded my own proposal because I’m still the videographer. So I have the full cast, all the kids’ reactions.”

Julian David and Brooke Delaney Samms, both 17, are in their final year with the company. The two are entering the University of Windsor as Concurrent Education students, David in French and Samms in English. When I interview them both in one of the rehearsal rooms at the church, they are itchy with excitement to talk theatre, dreams, and education. Both love reading and writing and spending time with their friends, like most teens

For David, he knows working in theatre and especially at Riverfront has shaped his love for working with children. “I want to have an impact on kids in that way and teach them skills that are valuable, being able to get in front of people to present and talk to them without shaking,” he says. “Anything can happen on stage and that goes on in life too. You have to roll with the punches. It’s been an awesome experience to have and I am going to carry it for the rest of my life.”

Samms has been with Riverfront since she was six. Now, in her eleventh year, she celebrates how theatre is an escape that helps her grow. “It’s like when you read. People read to go into a new universe, a new life, and to try things you would never normally think about. You’re channelling another person’s feelings, emotions, different perspectives and you get to express those emotions through that. It’s really really fun, interesting, and fascinating.”

Ultimately, Riverfront has helped both David and Samms build on personal goals, grow their abilities to work collaboratively, and offer an outlet to be unapologetically creative.

Samms sees the value of working with many different types of people. She says, “You grow together. I’m very opinionated and can be a perfectionist and I get anxious because I need to be perfect. But Riverfront has helped me be calm in these situations, which you have to be in plays because you’re all working together.”

The two are also both passionate about criticism, knowing that receiving feedback is integral to their growth as artists. David explains, “I always seek out criticism because as much as I think [a scene] could be good, someone may see something else that is missing. It’s an intimate experience seeing how someone else’s brain sees a character or scene.”

For those kids wanting to try theatre, or for parents unsure if they should put their child in a company, Visan asks to give drama a chance. “Hear out your kids, hear what they’re interested in. Try it out, and if they don’t like it, what do you lose?”

She’s singing her blues away