Drive into the future with Windsor’s virtual reality cave 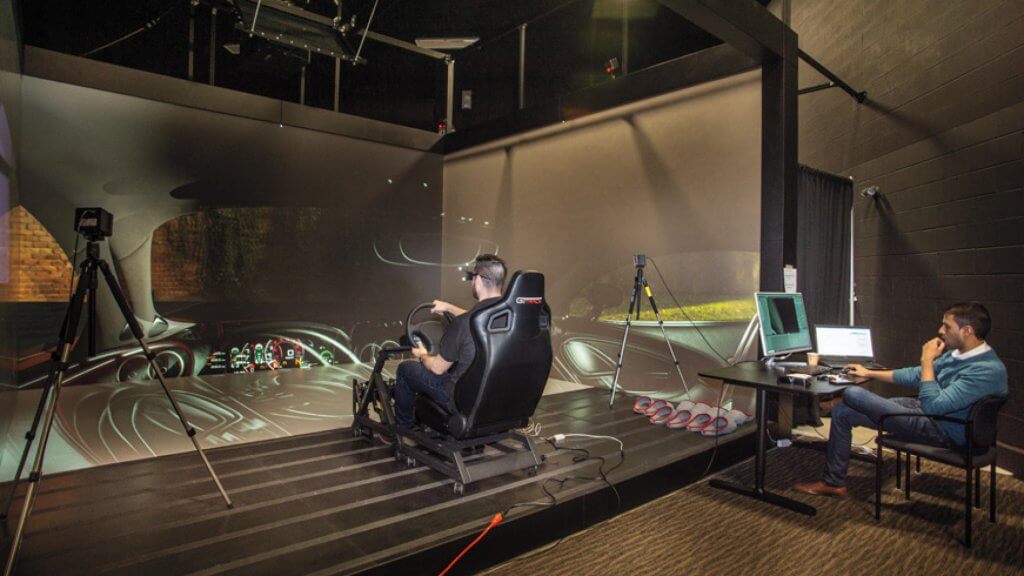 In March 2018, Elaine Herzberg was pushing her bicycle across a four-lane road in Tempe, Arizona, when she was struck by an Uber test vehicle. The self-driving “autonomous” car that hit the 49-year-old victim was functioning in self-drive mode with a human operator sitting in the driver’s seat. Following the collision, Herzberg was taken to the hospital where she died of her injuries. Uber responded to the fatal incident by suspending tests of their self-driving vehicles in Tempe, San Francisco, Pittsburgh, and Toronto

There have always been Acritics of the self-driving car technology, where failures can be both expensive and dangerous. But after the incident in Arizona, the industry faced a push for safer testing from lawmakers and the general public. “When we looked at the regulatory framework in the U.S., we saw there was a lot of skepticism by the public around autonomous vehicles,” says Susan Anzolin, the executive director for the Institute of Border Logistics and Security. “There’s a real need to do a lot of testing before you can put these vehicles out on the road.” In order to make self-driving vehicles a reality in the future, developers need to prototype, design, and test cars using a real-life environment with room for error

The VR Cave—Canada’s largest virtual reality space for autonomous vehicles – makes it possible for companies to vigorously test product features without being a danger on the roads. Simulations with digital environments that accurately reflect real life gives people the ability to try new things and test out products at a much lower risk than doing it on real roads. Launched in May 2019, the three-dimensional space based at Windsor’s Institute for Border Logistics and Security allows developers to test and validate new and innovative product designs.

“In the U.S., they’ve determined that one hour of VR testing is equivalent to one hour of physical testing. You can really repeat your tests until you have some sense of confidence that the technology will work on the road,” explains Anzolin.

One of the key funders for the $4.6 million project was Autonomous Vehicle Innovation Network (AVIN), run by the Ontario Centres of Excellence. With the goal of making Ontario the province of emerging technologies in the field, the AVIN has funded six sites in total across Ontario to further research on autonomous and connected vehicle technology

Windsor’s industrial and manufacturing heritage is responsible for how the city has developed over the years and makes it the perfect place for such a space to exist. The city is the automation/automotive capital of Canada, with over 400 companies and 1,000 manufacturers. The VR Cave will allow small- and medium-sized companies to use the space free of charge, and will also attract new companies to the area. The space is also open to researchers and students who are hoping to further their education using the VR Cave as a learning tool. It helps that the VR Cave is next to Michigan, which has the largest concentration of engineers in the industry in the United States, and leads the nation in patents relating to navigation and smart mobility

“The opportunities that cutting-edge virtual reality technology present for Windsor-Essex are tremendous, and certainly not just advantageous for industry applications,” says Yvonne Pilon, President and CEO of Windsor-Essex Tech Alliance (WEtech Alliance). “Just one example: the growing FIRST Robotics community in Windsor-Essex has over 80 local teams that can now access the Cave to design, engineer, and test in a virtual space, while adding VR into their skills toolkit. The ability of our local tech talent to gain familiarity and expertise working with VR provides them—and our local industry partners—with a tremendous advantage.”

The Windsor-Essex Economic Development Corporation began working with WEtech Alliance, the University of Windsor, St. Clair College, the City of Windsor, and County of Essex to submit a formal application in January 2018. The funding was approved in June last year

A year later, in June 2019, the VR Cave was selected by the Government of Canada as the site to announce a new nationwide research fund that aims to bring new perspectives and approaches to support high-risk, interdisciplinary, and transformative research. “The VR Cave was selected for the announcement because it showcases new technology being applied to existing industry sectors to help spur greater innovation,” says Anzolin

Pilon is optimistic about the project and what it will do for the Windsor-Essex region in the coming years. “As WEtech Alliance continues its mandate to grow tech companies and strengthen the tech ecosystem, assets like the VR Cave become critical to developing and attracting tech entrepreneurs and top tech talent, especially in the burgeoning mobility space. We are already building the pipeline of tech entrepreneurs and tech talent through initiatives such as the Tech Mobility Challenge during our annual Tech Week YQG, “Hacking Health Windsor-Detroit,” which this year will focus on the intersection of mobility and healthcare, all the while leveraging the strong cross-border partnerships we’ve developed with industry and stakeholders in the Detroit area.”

Last summer, Detroit launched the first driverless shuttle service in the country. The vehicles seated six, and included a human driver to tell people on board how the vehicle will work and how the driver will take control if something goes wrong. Though it wasn’t open to the public, it allowed us all to get a glimpse of what the future may look like if driverless vehicles become more common on the roads. “When do we get to the point where it’s going to be ubiquitous? People are forecasting not for another 25 years, but you can see that there are a lot more vehicles that have driver assistance that allows them to be partially autonomous,” says Anzolin. Though no one can predict with 100% accuracy what the future will look like, we can be sure that spaces like VR Cave will curb tragedies like Herzberg’s and allow safer roads both today and in the future.

For a Video of the VR Cave, go to