The Sood family is reshaping Walkerville for both businesses and families
Author: Devan Mighton
Photographer: Trevor Booth
6 months ago
|
No Comments
Share On 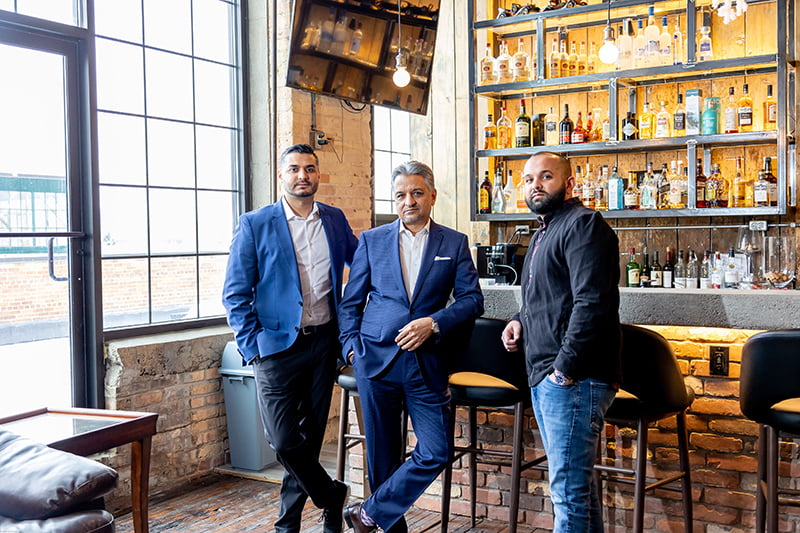 Walkerville is a cornerstone of Windsor. Founded by whisky revolutionary Hiram Walker and incorporated as a town in 1890, it was conceived by the liquor magnate as a “model city” to be the envy of both the region and all of North America. Favouring whisky production – growing grains, milling flour, raising livestock – the town built around the distillery on the Detroit River also served as a home for Canada’s fledgling automotive industry.

By 1931, Walkerville had a population of over 10,100 people and its own school – Walkerville Collegiate Institute, built in 1922. However, the writing was already on the wall for the growing community. On July 1, 1935, Walkerville, Ford City, and Sandwich joined the previously annexed communities of Ojibway and Riverside as historic neighbourhoods amalgamated into the City of Windsor. Today, Walkerville is far from forgotten. A bustling hub of activity in the heart of the city, sharing the Walker Rd. artery with Ford City to its east.

For over 30 years now, Ashok Sood has been a shaping force in modern Walkerville. “I moved here in the early 90’s,” recalls Ashok. “We bought our first property on Walker Rd. and then began assembling more and more. At different times, we bought seven or eight properties in the area. Walkerville is so close to the border, it’s convenient, it’s close to downtown, close to the water – I just love the area. Walkerville, in general, has always been my choice of area – a great neighbourhood.”

Founding his cleaning supply business, Champion Products, he created work for local residents. He raised his family here and brought his sons, Amit and Anuj, up in the family business tradition.

“Champion Products is well recognized in the community,” boasts Ashok. “I started the business in 1991 as a one-man show and it’s a pretty big organization right now – we’re 150 employees total. We have facilities in Michigan, Toronto, and Windsor, servicing Ontario, Quebec, and Michigan. My boys are involved in all aspects of Champion. We just want to put this land to the best use possible.”

Therein lies the Sood’s dream of “Walkerville Village”. A revived residential community built on the border of Walkerville and Ford City – with a goal of up to 500 new housing units.

“We’ve been accumulating all of this land for quite some time now,” explains Amit. “The initial project that was first kicked off was The City Market. Champion Products used to be at that location – 1030 Walker Rd. was where our paper products were based out of – and then we had a fire in 2011, which was devastating. We were able to repurpose the property many years later. In 2015, we opened the market. There’s so much land in and around the area, so a couple years ago we started another project where we put in 12 townhomes that are mostly occupied now. The second phase of these homes are now going up a couple addresses away, and we are building another 12 there.”

However, that is only the beginning – the Soods are thinking big. “We are looking at developing and building a combination of apartments, condos, townhomes and, eventually, single family homes as well,” says Amit. “In total, the project is calling for close to 500 new units that will be coming into that area.”

What started with The City Market in 2015 has now become a full on community rejuvenation project for the Soods. “We started building and improving the area – got a little bit of support from the city, and I would like to see more of it to bring it up to where it’s supposed to be,” explains Ashok. “Why run around miles and miles out of the city when you can do this right here?”

Now in the community fabric for almost seven years, The City Market has proven to be a success for the Soods. “I deal with a lot of different businesses and over the years I have seen them struggle – getting a 500 sq. ft. store, advertising on their own, and paying for utilities. So, I came up with the idea, why don’t we create a community place where people can come in for as low as $100 per week, all in – and there is already traffic coming through, they don’t really need to advertise if they’ve got a good product – they can come in and start selling it instantly.” Ashok adds that the market is currently oversized for their needs, and they are remodeling to cut the space down to a more cozy 30,000 sq. ft.

The Soods have done their part with local philanthropy, as well, through charitable contributions, donations, and fundraiser events. “We’ve never said no to anybody,” states Ashok. “Do we do anything in a big way? No, but we do a lot of small stuff. For example, we’ve supported the Downtown Mission for the longest time. Also, we work with the Canadian Mental Health Association – we’ve sponsored them a few times.”

Amit says that they hosted an annual golf tournament up until the start of the pandemic with proceeds going to the Downtown Mission. They also donated around $40,000 worth of Champion Products items, like toilet paper and cleaning supplies, to the June 27th Miracle event in 2020. “We saw that people were donating and we wanted to do something as well, so we called the organizers and said we have a bunch of stuff we’d like to donate and we made the donation,” explains Amit. “No one asked us to donate. We felt it was something we should do to help the community during a time that was scary for everybody.”

Amit also sits on the Drouillard Place board and, in the name of Champion Products, has sponsored as many as 40 local kids to attend summer camp.

In 2011, Champion Products moved into the historic Long Manufacturing Building just east of Walker Rd. on Edna St. in Ford City – just off Drouillard Rd. The property, which dates back to roughly 1910, has been rejuvenated by the Soods and is again a key part of Drouillard Rd. and Ford City.

“When we moved in here, there was all this talk about Drouillard Rd. being run down and the quality of people,” explains Ashok. “I can tell you – I’ve owned this building for almost 20 years now and they’re great people, they just had a stigma attached to them.”

“We, personally, feel proud when we take a derelict piece of property, such as our building on Edna and turn it into what it has become,” adds Amit. “When you see these vacant lands that have been sitting vacant for 20-plus years at least, and you turn it into something new – that is what we feel is the reward in all of this – creating something new out of something old.”

The Soods see Walkerville and Ford City as community partners – a community and bond that they would like to see grow.

“We just want to improve the area, which we really believe in,” praises Ashok. “I think Walkerville is “the place” – you could call it the new Downtown Windsor – it’s the most happening place. There’s a large amount of investment coming into the neighbourhood. I don’t know any other neighbourhood in Windsor where there’s this much action.

“We are excited more than ever before about this development and the response from the public is unbelievable. If we put a sign up tomorrow, within a week, everything will be sold.”

For more information on Champion Products, please visit their website at www.championproducts.com.