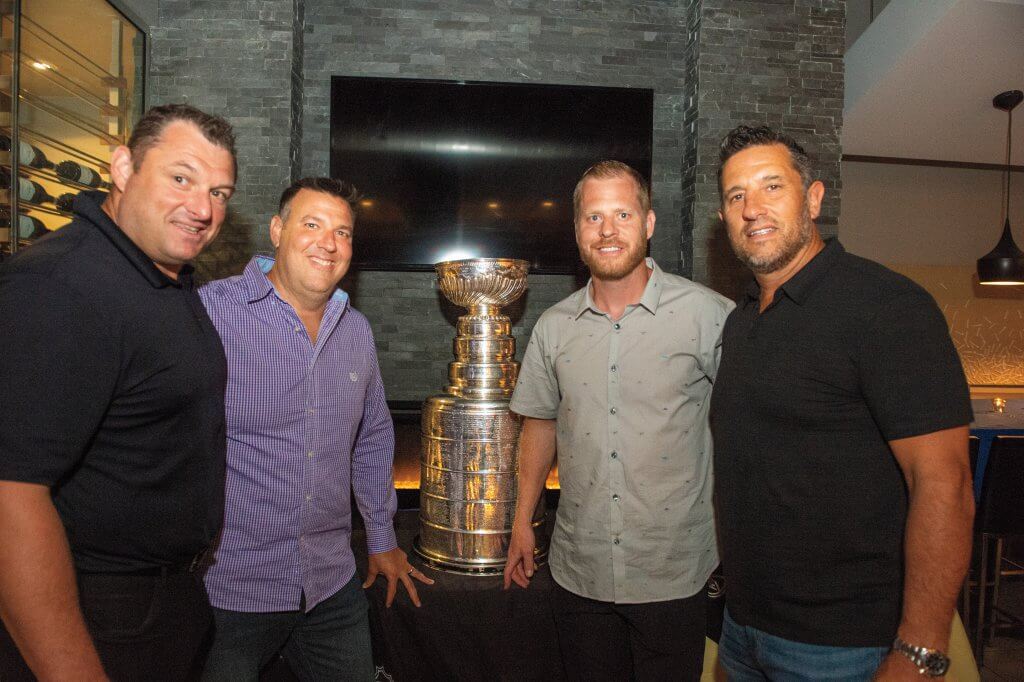 Donald McArthur caught up with four local hockey standouts achieving success as coaches. One of them just brought the Stanley Cup home to Lakeshore for a victory tour. The others dream of following in his skate strides.

Bringing the Stanley Cup home to Essex County was Steve Ott’s way of thanking the community that has had his back since he moved to Stoney Point in Grade 8 with dreams of hockey glory and the skills and tenacity to achieve them.

“It’s such a great feeling to be able to share it with friends and family in the community who have backed me for so many years,” says Ott, a former Windsor Spitfire and current assistant coach with the St. Louis Blues. “I have had a lot of support in my career. It’s a special feeling to be able to tie it all together and bring it home.”

Ott has come back to Stoney Point to connect with his sister and parents every summer during a 14-year NHL career that saw him score 109 goals and record 179 assists over 848 games with the Dallas Stars, Buffalo Sabres, the Blues, Detroit Red Wings, and Montreal Canadiens. He used to spend those summers training hard and hitting the gym but now he’s mentally unwinding after a gruelling campaign that saw his squad crawl out of the basement and the coaching staff work 67 consecutive days.

While hockey is never far from his mind, he’s trying to decompress and spend time with his wife Erica and children, Layna (12), Maverick (4), and Hendrix, who turns one in August.

Ott loves working for the Blues and has one year left on his contract. He is soaking up knowledge working under head coach Craig Berube in the hopes of moving up the coaching ranks. “I’m continuing to garner as much experience as I possibly can. I enjoy learning every single day and I’m in a very good position as an assistant coach to continue to learn,” says Ott, whose retired Spits jersey hangs from the rafters of the WFCU Centre. “I’m willing to put the years in and the work to hit my main goal of becoming a head coach in the National Hockey League.”

The Battle of Ontario will heat up this year when new Ottawa Senators’ coach DJ Smith squares off against the Maple Leafs and Mike Babcock, under whom he worked as an assistant for the past four years. Smith, a former Windsor Spitfire player, captain, and coach, has been a head coach before—he led the Oshawa Generals to the Memorial Cup in 2015 and was named OHL Coach of the Year in 2014—but never in the National Hockey League.

“There are only 31 of these jobs in the league and seven in Canada. It really is a big step but it’s something I’m ready for,” says Smith, 42. “It’s taken me 16 years to get to this position and I’m going to make good on it.”

While the media scrutiny in Ottawa might not be as intense as in Toronto, Smith knows there will be pressure as he seeks to rebuild a franchise that has floundered since reaching the Stanley Cup Finals in 2007.

“My biggest challenge is to change the culture there and establish a positive work environment on a daily basis and it’s something I think I’m good at,” says Smith. “We have to show that the team is going in the right direction and that we’re turning the corner and playing hard.”

Smith was raised in River Canard before moving to Tecumseh, a place he calls “one of the best-kept secrets in Canada.” He and his young family—including Brock (3) and 15-year-old Colton, who is eligible for next year’s OHL Draft—will continue spending their summers there after moving to Ottawa.

Smith is married to award-winning journalist Christie Bezaire, who worked for CTV Windsor before moving on to CP24 in Toronto. She’s looking for new opportunities in the nation’s capital and won’t be on the sidelines for long. “She’s very good at what she does,” says Smith.

Smith played in 45 NHL games for the Leafs and Colorado Avalanche, notching one goal and one assist, and the desire to win the Stanley Cup burns stronger than ever. He refused to touch it during a recent event at Rochester Place and says he’ll keep grinding until he can hoist it himself.

“You only touch it when you win it,” says Smith. “If you want to achieve anything in life, you have to think about it every day and I really believe I’m going to win that Cup.”

Bob Boughner is keen to get back behind the bench as an assistant coach with the San Jose Sharks and hopes it’s a path that provides him another shot at a head coaching job in the National Hockey League.

“It’s something I loved doing,” says Boughner, who was let go as the bench boss of the Florida Panthers in April after the team missed the playoffs for two consecutive seasons. “You have to put yourself in the right positions to get to that point and San Jose is a great place to be.”

Boughner oversaw the Sharks’ defence for two seasons, coming within two games of winning it all in 2016 before heading to the Panthers. The Sharks snapped him up again in May with a two-year deal and the work has already begun.

He went to the NHL draft in Vancouver in June and also to San Jose. He knows the Sharks are contenders, with elite defencemen like Erik Karlsson and Brent Burns, and he wants to win the Stanley Cup more than ever after seeing Steve Ott bring it home to Stoney Point. “When you see a close buddy achieve his dream like that, you want it even more,” says Boughner.

Boughner played 10 seasons in the NHL, netting 15 goals and 57 assists over 630 games with the Nashville Predators, Pittsburgh Penguins, Calgary Flames, Carolina Hurricanes, and Colorado Avalanche. He wore the ‘C’ for the Flames and, from 2003 to 2006, served as the executive vice president of the NHL Players Association.

Boughner coached the Windsor Spitfires to back-to-back Memorial Cup championships and was twice named OHL and CHL Coach of the Year. He maintained his stake in the club when Cypher Systems Group took a controlling interest and is still very much involved.

“We’re a young team with a lot of talent,” says Boughner. “This will be our year to start turning the corner and having some real success on the ice.”

Boughner and his wife, Jennifer, return to Tecumseh every summer with their four children: Brady (23), Molly (21), Emma (19), and Lola (16). The kids will attend local schools when Boughner heads back to San Jose.

“We decided long ago that this would be our summer home and we’ll always come back,” says Boughner. “It’s just a great place to come back to every summer and catch up with family and friends and decompress.”

Others might have given up on the dream after a quarter-century of long nights and gruelling bus rides, but Bob Jones just kept grinding and believing. “You never give up hope,” says Jones, 49, who is about to embark on his first season in the National Hockey League as an assistant coach for the Ottawa Senators. “I spent 23 seasons in junior and one in the American Hockey League so it’s been a long road, but, at the end of the day, it’s all worth it.”

Jones was drafted by the Detroit Red Wings in 1989 but never laced up the blades in the NHL, playing instead for teams like the San Diego Gulls, Fort Wayne Komets, and Muskegon Fury.

He began his coaching career in 1995 as an assistant with the Greyhounds in his hometown of Sault Ste. Marie and moved onto Brampton, Toronto, and Sudbury before landing in Windsor in 2007 as an associate coach for the Spitfires.

He won back-to-back Memorial Cups with Bob Boughner, served as the Spits’ head coach in 2010-11 and then again as an associate coach before landing the top job in Oshawa in 2015. He worked as an assistant coach for the Texas Stars in the AHL in 2018-19 before close friend DJ Smith offered him his big break with the Sens.

“I never reached the pinnacle of the NHL as a player,” says Jones. “This is something I’ve been waiting for my whole life, as a young player and then as a young coach. It’s finally come to fruition.”

Jones will start as the team’s “eye in the sky,” relaying information from the booth to the bench, but the working plan is for him to get down to ice level for the third period.

Jones has called Windsor-Essex home for 13 years—the longest stay in his journeyman career—and his family will keep their home in Tecumseh while he and his wife, Paige, rent a home in Ottawa. Their son, Blake, is an apprentice plumber with Encore. Daughter Brianna (20), is a second-year nursing student at St. Clair College.

The other side of the camera