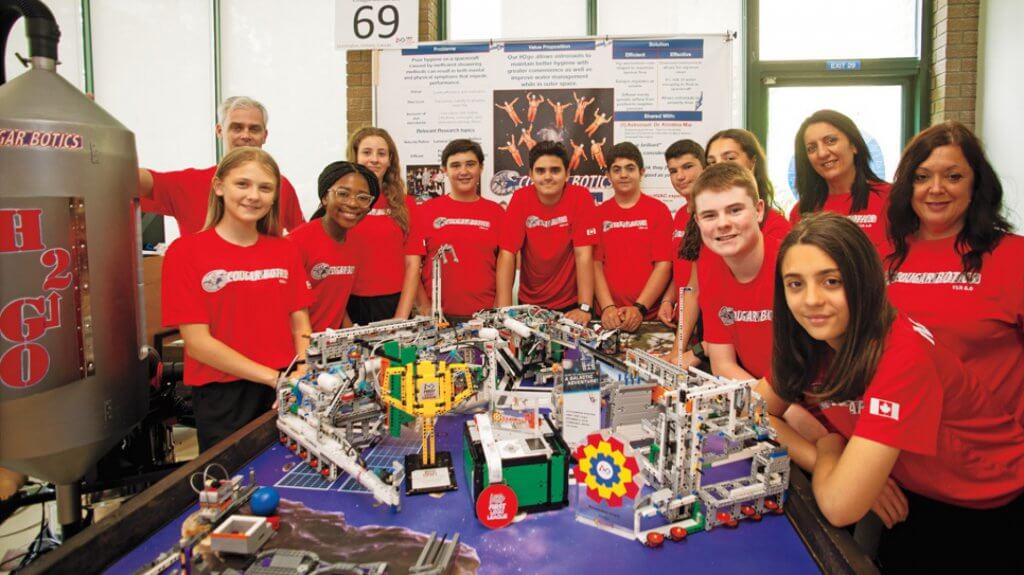 Leamington’s Cardinal Carter Middle School may be only three years old, but its robotics team, Cougarbotics, is setting records—not only for the school, but for the students personal development as well.

Mastronardi explains, “You have to be quite the student to be involved in robotics. Mr. Kostanjevec is here five to six days a week after school, every night and often on weekends. Sometimes it’s until 11 at night. It’s a commitment. This isn’t for the weak of heart.”

Daesa Minaudo, 13, loves being a part of robotics because of the life lessons she gleans. “One skill that this team has taught us is to be more balanced. We have to balance our home life, school life, social life, and robotics life. I’m in this to learn for the future.”

Others in the group talk about how they were introverted before joining robotics, but now they’ve made new friends and have different opportunities to socially engage, which increases their confidence levels and communication skills.

Charlie Liebrock, a seventh grader on the team, believes she learned a lot this year. “Presenting in front of a whole gymnasium was a milestone for me. I used to have trouble presenting just in class. Now I feel like presenting to a class is no problem.”

FIRST Lego League is “a program that supports children and youngsters in order to introduce them to science and technology in a sporty atmosphere.” Dean Kamen, the man who invented the Segway and the diabetes pump, came up with FIRST robotics 20 years ago

This year’s Razorback Invitational was in Arkansas and the students receive scores in three different areas: core values, project, and robot

Core values grades the students on how they work together as a team. The judges notice if the students are having fun, smiling, letting others take turns in speaking, and general cooperation. The team also applies core values to their school, so that their impact goes beyond their team. For example, this group started a Lenten meal project for Easter to supply food baskets to those in need.

The project section is based on a subject given to teams around the world at the beginning of the year. This year’s theme was “Into Orbit,” so the group decided to create a prototype of a shower for astronauts. “H2Go is a shower for space,” eighth-grade team member Vanessa Jacobs explains. “Spot-washing causes a lot of different illnesses, one being problems in their microbiota. H2Go allows the astronauts to wash their body and scrub vigorously in an enclosed design.”

The team took a field trip to meet with Dr. Kristiina Mai, an engineering professor at Ryerson University, and had multiple meetings with Frank Frabotta, the owner and head engineer of Baymar, who taught them about velocity

Ricci-Minaudo explains, “There’s a true testament to their dedication and loyalty to this project. We had middle school kids coming into school on a Sunday in the middle of a snowstorm to learn from Mr. Frabotta and he came in with so much care to teach them.”

In the last session, the students were tested on their robot, which involved research, coding, and building so that their robot successfully ran missions on a table

Making their way to the competition in heavy tornado season—the team had to go to the basement one day when 52 tornadoes had touched down—was worth every minute as they laugh and smile, remembering the joys they experienced there

“I’m happy that we could go to Arkansas and meet other teams and spend more time together as a team,” 14-year-old Matthew Preston says. Teams came from all around the world, bringing their own levels of expertise, experiences, and items to share.

Kostanjevec, who has always been involved in extracurriculars, is happy to be a part of robotics after his years involved in sports. “I recognized the benefits of robotics because it causes them to think like scientists and engineers and I got very excited about that. The same coaching things you learn on a basketball or soccer team are what you’re learning here. Same skill sets, except it’s more than just the teamwork.”

Lucas Makhlouf, 14, agrees. “Robotics has taught me that it’s okay to take a break. I took a break by doing other clubs like Me to We.

“It’s a challenging focus,” he smiles.

If You Want to Go Further