Shirley Williams always wanted to make it as a full-time artist. Nearly 30 years after scrapping her day job and taking a chance on Windsor, she’s shown and sold pieces across North America and composed a one-of-a-kind, richly coloured life.
Author: Jesse Ziter
Photographer: Syx Langemann
3 years ago
|
No Comments
Share On 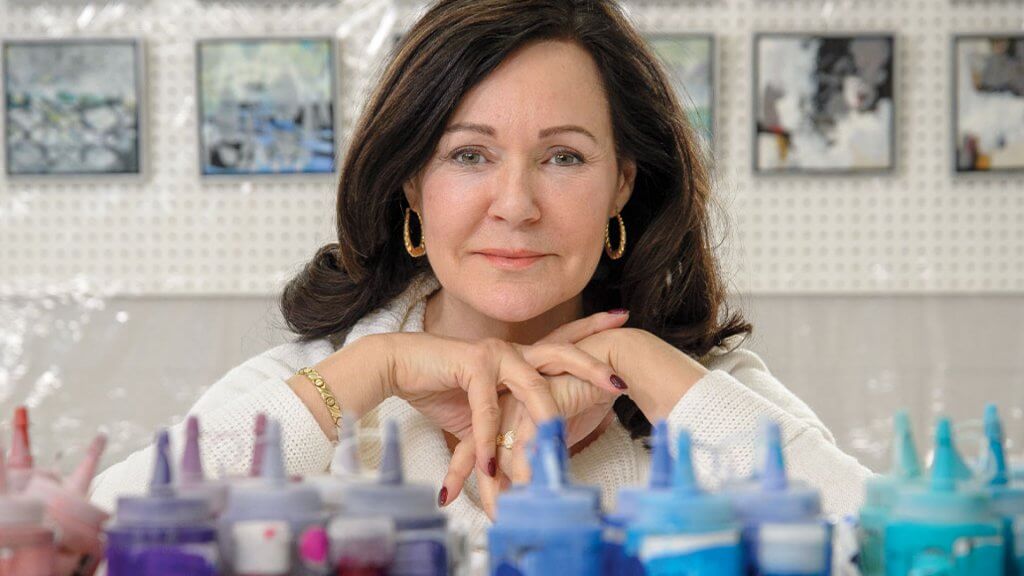 Shirley Williams painted herself out of a corner by moving to Windsor.

A successful working artist, she’s shown across North America to international acclaim, including at the Art Gallery of Windsor and memorable exhibitions in Toronto; Dallas; Naples, Florida; and, at press time, San Francisco. Yet all of that art begins in a central Windsor studio that looks out on a ready-mix concrete supply yard.

Forget the aloof artist archetype: across a table, Williams immediately strikes you as resilient, adaptable, and affable. Outside the gallery world, she’s noteworthy for a pronounced entrepreneurial bent. Always friendly with local interior designers, Williams has secured a lucrative agreement with a publisher in Texas who puts her work in front of designer professionals and hotel decorators in the United States. Moreover, her personal website doubles as a full-featured e-commerce portal with a thousand-person mailing list

This is no accident: Williams studied marketing and business at university, after which time she built a successful career as a film producer in Toronto. In a sense, Williams carved out a career within the intersection of art and commerce, liaising between documentary filmmakers and financiers. Despite her degree, she now admits, “I kind of enjoyed being with the creative people more than the business people.”

After 20 years in the big smoke, burnt out in the way that Toronto professional life reliably burns one out, Williams cashed out her partnership and committed to working elsewhere as a full-time artist. She created a list of criteria that her new home base would have to meet: it would have to be a functional, vibrant urban centre with access to the United States, affordable real estate, and a manageable pace of life. So, Windsor

In 1991, Williams purchased a derelict delicatessen on George Avenue and converted the former storefront space into a small gallery. The rear of the building, minus a few walls, made a functional studio space; home was upstairs.

While the city’s arts community was then neonatal at best, Williams survived for several years on walk-in traffic and word of mouth, working feverishly to refine her aesthetic and balance the books in turn. She put on small shows, built a modest mailing list, and eventually worked up the confidence to get her work in front of some important art world gatekeepers. “Windsor has always been very supportive of me, and right from the beginning I was able to make a living,” she recalls

Williams eventually graduated from that space, moved her retail business online, and purchased the permanent studio of her dreams, where she works now. Bathed in natural light, the airy, post-industrial space luxuriates across 1,800 square feet, its bright-white walls flecked with dozens of works in various stages of completion. In 2005, Williams rescued the workspace from receivership with her husband, who runs a commercial real estate company from one unit over. Previously used for automotive degreasing, the building sits just outside the shadow of the Windsor Assembly Plant.

From this base, Williams can buy supplies wholesale in Michigan, and she has a much easier time routing her paintings to dealers and clients in the United States. If you think about it, it makes sense: What does Windsor do well if not cross-border manufacturing logistics?

Whereas in Toronto she would decamp to cottage country for inspiration, Williams now has what she needs within a short drive. “I find the landscape here very interesting,” she stresses. “The horizon line is really important to me. The flatness actually adds to it, because these interesting lines are unobstructed. You see all these different layers and levels of landscape. The bulrushes. The colouration of the landscape. The textures. You’ll see a field against a band of trees against a band of clouds. It just does something to me.”

In her youth, Williams spent much of her time tracing that horizon line through backseat windows, watching Canada whir into blurry long-exposure horizontal streaks. Her father was in the military, which meant they moved often

Williams’ aesthetic sensibilities are similarly in motion. Her current work departs from the dramatic, abstract vistas with which she’s most often associated. The fact that Williams owns a studio and largely controls her own means of production allows her to indulge in a few exploratory risks. “I had a very strong style for 10 or 15 years, and I was getting tired of it,” she notes. “I’ve been in that research, experimental phase for a couple years, but it’s finally starting to settle, and that feels good.”

In 2015, when she found herself without any professional representation at all, Williams retreated into self-advocacy and doubled down on her web presence as she worked to refine her new style. “I saw it as an opportunity in a weird way. When you’re a gallery artist, when something is selling, they want you to keep making it whether you want to make it or not.”

In light of a changing, challenging art market, Williams will have to plan her next move carefully, but what she won’t be doing is changing her current live-work arrangement. “If I don’t go to the studio, I feel as if my day has been lost,” says Williams, who typically puts about ten hours a day into her work. “It’s an inner drive. What happens along the way is just a blessing.”

She looks around. “Even if I could never sell another painting, I’d still be in here every day.”

To learn more about Shirley Williams and her work, consult shirleywilliamsart.com

There, you’ll find regularly updated series of blogs and video studio diaries, as well as everything you’ll need to invite one of her works into your own home.