How two teachers bundled 'the art of math' and improved students’ mental health
Author: Alley L. Biniarz
4 years ago
|
No Comments
Share On 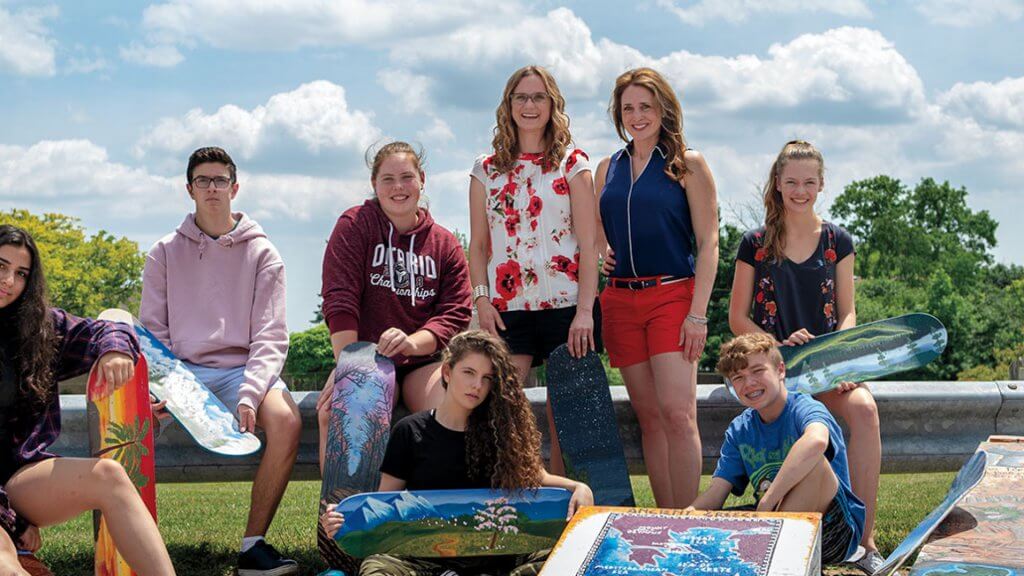 Art class is where the magic happens: the pencils shade, colour and bring the creation to life—but only for a moment. Once the student leaves the art room, the call for creativity halts and the stress of the other subjects becomes immediate. Art is soon placed on the back burner and math takes the front row

Math is a mandatory course, but art isn’t

Math has always taken precedence in the school system, which has caused the students who dislike the arts to avoid them and the ones who love the arts to shy away and prioritize the subject that is “required.” But two Oakridge Secondary School teachers in London, Ontario, thought the two subjects could co-exist. They saw the opportunity to bring art back to life without compromising the integrity of mathematics. This bundle is known as “The Art of Math.”

“We saw that students were feeling stressed in math and we wanted to start creating lessons through a different learning lens. We started with one project just to see how it would go, and from there we found that it was both fun and successful for the students,” says Laura Briscoe, visual arts department head and global competencies facilitator

With the cross-curricular collaboration between her and Jeni Van Kesteren, a math and student success teacher, the two have fostered an environment where students feel comfortable and confident to take projects into their own hands, to make meaningful connections in art, all while giving them an attainable entry point into math

“The students had the flexibility to individualize their learning to where they were in the math learning. And if they were passionate about the art, they didn’t care if they had to complicate the math a little on the way to getting there,” says Van Kesteren

The program is accessible to locally developed, applied, academic and enriched students. While all working in the same class, they even work on the same project. Students could switch early on if they felt they needed to, whether from applied to academic or vice versa. The students could continue working on projects without sacrificing the comfort of knowing their peers or teachers, and just had to adjust the math they were working on.

“Working with the same group of people gave them a sense of community where they could problem solve with an unlikely group of personality types,” says Briscoe

And the same goes for the two teachers

Briscoe and Van Kesteren were an unlikely pair to match up. But just like yin and yang, their areas of discipline found an attraction and were able to join together

“It was good for the students to see us, different personality types, openly discuss and review our planning,” says Briscoe. “We weren’t friends who wanted to teach together: we hardly knew each other. We were encouraged by our principal to work together because we have similar teaching philosophies,” Van Kesteren adds

“I have never been more aware of my artistic abilities than while in this class,” Van Kesteren laughs. “It was great for the kids to see how terrible I was but that even I could improve. They were given the confidence that we all have an entry point.”

“It was also important for them to see us get out of our own comfort zones,” Briscoe chimes in. “They could see that they didn’t have to know everything, that they had the opportunity to improve and that if they were stuck, it was okay.”

This inclusivity encourages students to help each other through trouble spots, and eventually they even began pushing beyond the curriculum that Briscoe and Van Kesteren had planned

There was no cookie-cutter way to put this bundle into action, but Briscoe and Van Kesteren were open to rolling with the punches

“The goal for me was to maintain the integrity of the arts and to make sure that the students were still able to have that creative flexibility and to not feel like it’s being contrived into math,” says Briscoe about the initial steps to creating The Art of Math program. The two instructors had a general idea of what they needed to cover within each curriculum but based on the variety of students they could receive, they knew they had to stay open for anything and everything to change along the way

“One of the first projects took too long and so we had to learn from that and decide that we would structure it differently the next time,” Briscoe adds. “But we were excited to see the connections happen early on in the semester. It was during our field trip to the art gallery and the students began commenting on art using math vocabulary. Soon it became contagious and they could identify concepts in the world around them without us having to prompt them,” says Van Kesteren

The participating students chose to be in The Art of Math, and were open to anything the teachers offered them. What Briscoe and Van Kesteren didn’t expect was for the students to continue to share their new wealth of knowledge with friends outside the classroom. Eventually, The Art of Math became a lunch-time activity, encouraging prospective students to sign up for the following year

“We started with grade 9 because it’s easy to identify art with grade nine math. It’s all lines and shapes—art is filled with that,” says Van Kesteren. Van Kesteren didn’t think the grade 10 curriculum would allow for it, but as the teaching went on, both Briscoe and Van Kesteren saw the opportunity to expand the program and are now offering it for the following year

Van Kesteren and Briscoe say that they owe the success of the program to the support they’ve received from administration, especially the Oakridge principal Tracy Langelaan. The timing had worked out because the school board was asking teachers and admins to approach their staff and ask the following question:

“If you could have a group of students for an entire morning—without worrying about bells and periods—what credits would you be working towards and what would you do with them?”

The two approached Principal Langelaan with this idea, and she was ecstatic and passionate about the possibility of interdisciplinary studies. “It couldn’t have been more perfect—especially with the province’s focus on math and the students’ lack of success,” says Langelaan. “I’ve noticed in my 20 years as an educator that if there’s a constant, it’s students’ stress associated with mathematical achievements. It’s a tough skill for kids to master but with this program, to introduce two opposing subjects with two traditionally very different teaching styles, and to see how successful the students would be…its buy-in and success is 110% attributed to those two. They were motivated not by their discipline but how they could make kids be successful.”

Some teachers were skeptical, especially considering the standardized test that the grade 9 students had in store for them later in the year. Van Kesteren had to remain mindful of this by combining traditional math tests with the individual non-traditional learning that the students would experience through The Art of Math

“I can’t speak to the results because they haven’t been released, but I can speak to my students’ confidence walking out of the test. The students left the test talking with Laura saying, ‘We must have actually learned something. I don’t know how I knew those answers, I just did.’ They realized they had learned everything through a different route,” says Van Kesteren.

The relaxed atmosphere and motivation to do the math, plus revisiting concepts throughout the semester through various art projects, really built on the students’ foundation. Rather than completing a series of questions in a textbook, there was an ongoing reflection that brought students back to key units.

“They developed the way they couldn’t if they had been in isolation,” says Briscoe. With this changed mindset there was a shift and a deeper sense of learning in the students. “They gained a transferable set of skills rather than just memorizing a formula and regurgitating the information. They learned what they could do with that formula and what they could create themselves,” she adds.

This comfort in performance legitimized the program for both Briscoe and Van Kesteren. They both knew the mental benefit for the students, but to see them feel confident in their performance on a test spoke to the value of the program. The happy part was that it just happened along the way; Briscoe and Van Kesteren’s goal was student success, and they received so much more

“At the end of the semester they had to sit back, review and see that there was more to learning than cramming and studying. They saw that there needed to be a balance with hardcore studying. It’s easy to keep going with how you’ve been doing everything, but now they know they can do and see things differently,” says Van Kesteren.

Briscoe and Van Kesteren are currently starting to plan what the next year will look like but are also vision-boarding some big changes on the horizon. Along with gaining interest from other aspiring bundlers, a major goal for the two is to create the resource they didn’t have while starting up their bundle program. They’re starting by sharing their Six Quick Tips to successfully bringing a bundle-course together with other educators.

1. Find planning time outside of the classroom and school. We all say we’ll get work done, but we inevitably fall into other work when in the school setting. By setting some time away—at each other’s homes or elsewhere—you’ll be able to stay focused on one goal together.

2. Discuss major components of each of your programs so you feel that you are maintaining the integrity of your separate course. This way you can easily combine rather than contrive your subjects.

3. Figure out which topics take the most time in your courses so you can align those concepts together.

4. Create a chart to stay organized, ideally one per each subject you plan on bundling together. In the final column you’ll want the collaborative project idea.

5. Start to organize where the content can overlap: what could these projects look like? Share ideas, pictures of what you’ve done in the past, and start putting them into those columns.

6. Stay flexible: don’t overplan! This is about the students and leave room for them to be the designers of the projects.

A few words from The Art of Math students:

Evelyn Armstrong joined the program needing help with math but ended up being a leader and mentor for her group by the end of the semester. “I always thought math was difficult, and when I saw this program I thought maybe they could incorporate how I’m a visual learner. I decided to join, and I was correct. It made math easier, and way more fun.”

Liv Sands remembered math as being hard in grade 8—she just wanted to lighten the load. “At the beginning while we were doing a review, I was struggling. Then we added the art and a brand new world of thinking came in. If you’re thinking about the program, just do it. Don’t be nervous! We all turn into a family.”

Aidan Bugler didn’t consider himself an artist at all but somewhere in the course, something changed, and he’s even taken a liking to the landscape art of the Group of Seven. “I’m good at math, and I’m definitely more confident in art now. The biggest change I’ve seen is how much my art skills have grown. I drew stick men and now I can draw…yeah, I can draw.”

For more on this story, visit the Math Art Website