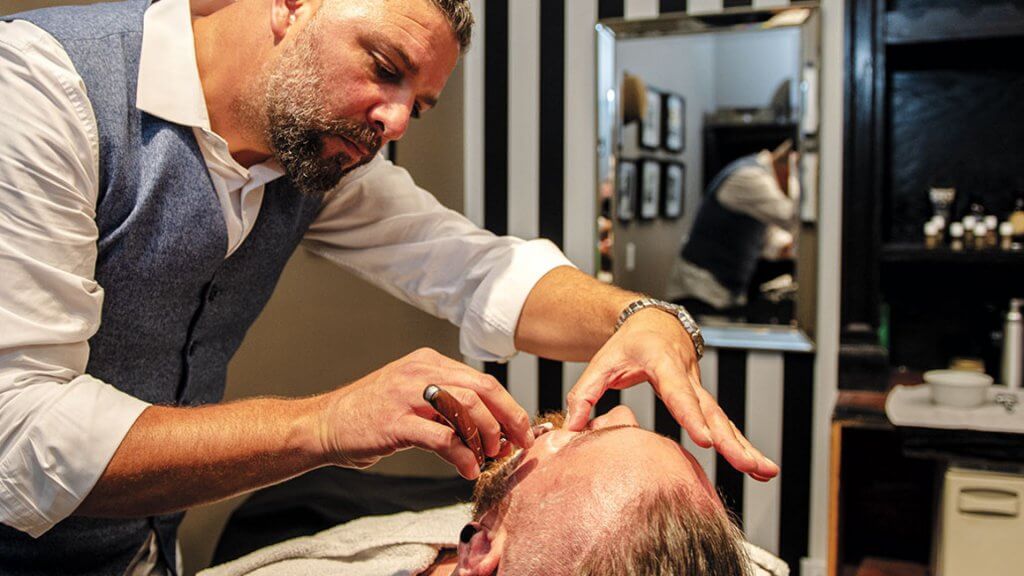 Barbering is having a moment.

At any time over the last few years, you may have noticed the guy mixing your drinks, rotating your tires or balancing your portfolio is wearing a fresh, tight fade, pompadour or fifties-style combover. He probably goes to a barbershop.

Although the ritual seems to have skipped a generation, men who might have gone to a salon—and indeed probably did go—a handful of years ago are increasingly returning to the friendly confines of a neighbourhood barbershop. You can scarcely drive for more than 10 minutes along any prominent artery of the city without passing one

It’s difficult, even for a barber, to tease out the exact difference between a barbershop and a men’s hair salon. The quintessence of barbering has less to do with a red-and-white candy-cane pole or the absence of hair-dye than it does with a certain masculine sensibility and specific standard of care.

A dab of hot foam, the perfect angle of razor on skin, a nice warm towel on the neck: what we might have understood as “metrosexuality” 15 years ago has evolved into a general understanding that it’s okay to want to look good and take care of oneself

Moreover, as traditional blue-collar line industries dry out, working with your hands in a service capacity—see also butchery, cooking and woodworking—has soaked up a significant amount of cultural cachet amongst men of a certain generation.

On the other side of the chair, in a world where men are increasingly (and, let’s be frank here, misguidedly) feeling marginalized, barbershops represent something of a safe, male-centric space, where men of all ages can enjoy a convivial, largely homosocial experience. (A caveat: there are certainly many highly skilled female barbers.)

To learn a bit more, The DRIVE spoke to a couple of Windsor-Essex County’s finest, at varying ends of the market

Contemporary barbershop culture is often glossed over as an urban, millennial-driven phenomenon, but Tecumseh’s Mark Lombardi is decidedly neither. The owner-operator of Lakeshore’s Lombardi’s Classic Barbershop, Lombardi is a fortysomething family man with an entrepreneurial bent—the kind of guy who looks you unwaveringly in the eye, calls you a “business professional” and compliments your outfit.

His success is compelling evidence that barbering is becoming big business

Before picking up his first pair of scissors, Lombardi spent 18 years in the automotive industry, mostly in sales. After a 2011 change of company saddled him with a daily cross-border commute, his wife, a hairstylist, noticed he was mostly miserable. She suggested he give cutting hair a try.

“I told her she was crazy,” he recalls, “but I actually took her up on it after probably the fiftieth time she tried to convince me. I gave it a shot, and I really enjoyed it.”

Lombardi spent a year learning his trade, and then began manning a chair at his wife’s salon. Before long, he had his own two-chair operation. Today, the six-year-old shop employs 10 and is known to attract droves of father-son pairings; a chunk of an afternoon spent in a barber’s chair constitutes quality family time.

Like a well-styled gentleman, you can tell a lot about what a barbershop aims to mean by how it looks. I’m speaking with Lombardi in his shop’s “executive room”

—a private enclave for his most privileged clientele. Wrapped in robustly handsome dark wooden cabinetry, it’s so well curated that it seems almost Hollywood set–dressed: there are tight rolls of white towels placed just so, a well-formed felt hat hanging from the wall and single-serving glass bottles of Evian. As elsewhere in the shop, the espresso flows freely. The walls are decorated with black-and-white historical photos in clean gallery frames: there’s Briggs Stadium, Boblo Island and Ambassador Bridge ironworkers, for example. It all sets the tone for what Lombardi aims to do by reorienting the client in history.

To go with all that, Lombardi is currently developing a line of all-natural, additive-free shaving products (“Lombardi’s Shaving Company”) with Tecumseh’s Ocean Bottom Soap Company. In a way, he’s found himself back in the manufacturing game.

According to Lombardi, his clients are attracted to the inherent honesty of what you might call old-fashioned customer service. “The guys who are coming in are guys,” he stresses. “It’s your typical dude that just wants a good and fair service. Whatever it says on the board is what you’re getting. From the start, I really wanted people to understand that we have an old-school mentality, but when you open the door, you see a modern twist.”

That’s not to say there isn’t an element of pampering at play. “I think what we offer here … is a customer service experience that attracts a specific clientele,” continues Lombardi, who favours the term “community barbershop.” “The clientele that we want is going to come in, chill out, get online, watch some golf, have a coffee.”

Of course, increasingly, they also want a great haircut. “The cleanliness, the sharp edges, the style of men’s looks and grooming right now are at a heightened level,” says Lombardi, whose personal barbering aesthetic trends towards conservatism. “When you get a man in here who’s 55 years old who wants an old-school combover, that’s what we want! We want guys to explore more of the fashions that are out there.

“We’ll put that line in. We’ll even add a bit of colour, silver up your hair a little bit. We’ll give you that hot lather neck shave with the blade. I think that a lot of guys, that’s what they want, man.”

Lombardi’s noticed that most men tend to court barbers who reflect their own personality. “As we started to hire great people,” he explains, “they started to attract their own clientele, which kind of fits their own attitudes, lifestyles and personalities. Personality is a big thing in this business, because you have to be able to have a conversation. You have to be a great listener. If the haircut is great, but you didn’t say ‘hi’ or ‘bye,’ at the end of the day it’s just a haircut. It’s not an experience.”

As far as Lombardi’s concerned, that type of experience is easier to come by in Windsor than it is in most places.

“This barbering industry is absolutely fantastic,” insists Lombardi, who namechecks Mardin’s Barber Shop on Ottawa Street, Olde Riverside Barber Shop and Border City Barber Shop as exemplars. “There are some wonderful leaders in this city that travel all over the place. There are guys out there who’ve done a lot for this industry, who’ve gone through the difficult part, too. Now, here’s the revival of it. The resurgence of the industry.”

Let’s talk about one example of that: Sinar Mrkos’s Ferocious, an emergent full-service barbershop in the city centre, skews a bit younger and hipper. This August marks four years in business, the first two of which were spent in a smaller Ottawa Street location. Today, it’s staffed by Mrkos, his brother Samer and an apprentice.

While Lombardi’s is a well-oiled operation by any measure, Ferocious is a bit less formed around the edges—by design. On these walls, the de rigueur Marilyn Monroes are flanked by everything from Japanese lithographs, Blue Chicago art prints, a novelty Nevada licence plate and an actual samurai sword.

It’s a decidedly eclectic space; it turns out I’m not the first to use that word. “That’s the biggest compliment we get,” says Mrkos. “The word ‘eclectic’ describes our personality, because we’re like chameleons—we accommodate everybody. The fact that we have so much different artwork, and so many different styles coming off these walls reflects us and how open we are to different things.”

Shops like Ferocious exist at the intersection of luxury and economy. Because the greatest indulgence is sometimes opening up a few extra minutes of your day, Mrkos and his staff turn out a typical haircut and beard trim in under 20 minutes. “We’re known for our quality and quantity,” he stresses. “We’re naturally quick, and good at what we do. We never cheat, as fast as we are.”

At 29, Mrkos is what you might call a middle-aged millennial. He speaks enthusiastically about his trade, punctuating his speech with “literallys,” as he lays out his shop’s ambitious future plans. In the long term, Mrkos envisions Ferocious as a full-service salon and spa for men.

An award-winning visual artist at Catholic Central, he took to haircutting as a creative outlet with practical possibilities while still a teenager. Highly skilled at styling men and women alike, Mrkos worked at a handful of local salons before eventually striking out on his own with Ferocious.

“The reason I like doing men’s hair is because you get faster results,” he explains. “Within 15 minutes, you can change the life of the guy sitting in your chair. With women’s hair, it involves more work. Colour. Highlights. Perms and chemical relaxers. That’s what I love about men’s hair: A simple cut can take a guy from a 6 to a 10.”

So far, the city has been receptive. Mrkos agrees that he couldn’t have picked a better time to open up shop. “The modern male is definitely more stylish. Definitely bolder,” muses Mrkos. “Guys just got sick and tired of looking the same. We have no makeup, so our hair and beard are our makeup.”

While embracing barbershop culture often feels like retreating into the past, Mrkos sees the broader increase in men’s grooming as part of a very progressive blurring of gender binaries. “In this new-age world that we live in, if a woman can do what a man traditionally does, why can’t a man do what a woman does?” he wonders. “Everybody is finding opportunities to be different and be their own person. I think that’s why a lot of guys are getting into the fashion industries, because they previously weren’t able to because of the stigma.”

Part of this sea change involves young boys becoming empowered to explore their aesthetic preferences. Mrkos explains, “We have boys as young as 10 years old bringing in pictures they found online and asking us, can you make my hair look like that.”

You have to ask: who’s in the pictures? Mrkos quickly plucks Cristiano Ronaldo and Zach Efron from his memory, but it’s clear that they’re not alone. “All the Hollywood pretty boys,” he laughs.

Although he’s taught hairstyling at St. Clair College, Mrkos, a licensed beautician, understands that one does not become a barber in the classroom. “My brand is custom,” he clarifies. “In this industry, it’s very difficult to customize your work. People take what they learn in school, and they apply it to every single person, every single hair type. And this is very bad, because everybody gets a generic haircut that a barber learned in school.”

Perhaps this is a good opportunity to note that the rebirth of barber culture we’re heralding, it’s easy to forget, is very much a white, Western middle-class phenomenon. In plenty of places, barbers never left.

If you’re interested in skipping the salon next month, Mrkos encourages you to turn yourself entirely over to a skilled barber. “Trust the process of going to the barbershop,” he advises. “Be open to different things. We’ve had a lot of guys come in who are stuck in their old ways. They have haircuts that they’ve been getting for the past, literally, 15 to 20 years … Listening to suggestions from your barber is very, very big. Be open to those suggestions. Because hair will grow back.”

YQG Influencer: Women Don’t Belong In The Kitchen… But You’re Gonna Want Her In Yours