Windsor native, Dave Merheje, has taken the comedy world by storm and has been honoured as a graduate of St. Clair College
Author: Matthew St. Amand
Photographer: Matthew Manhirea and Scott McLean
10 months ago
|
No Comments
Share On 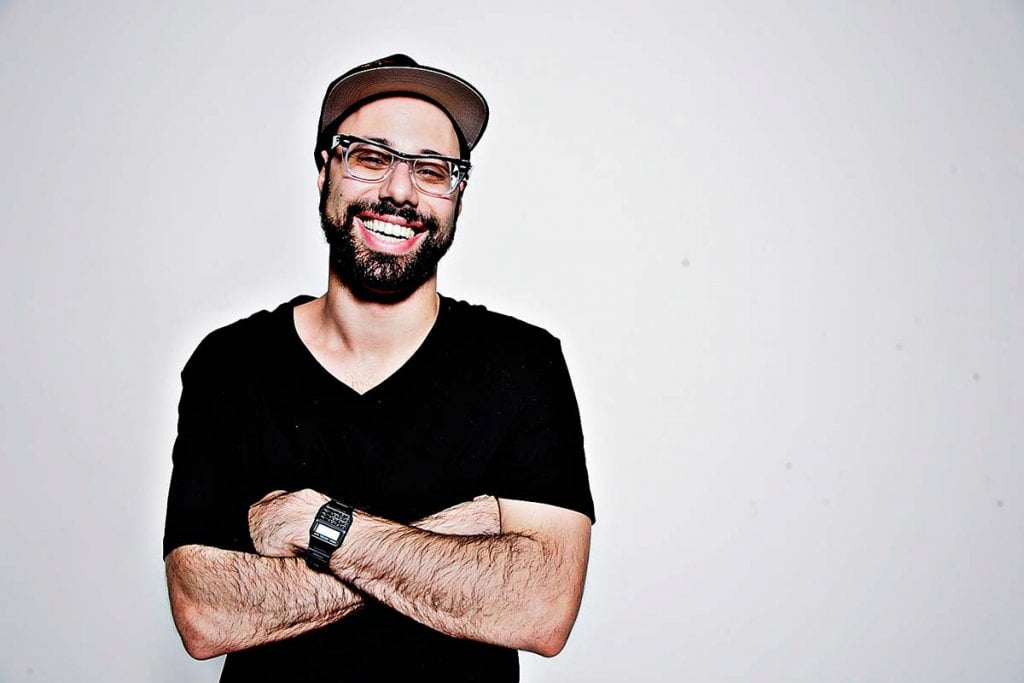 Few experiences in life can match the terror of a new comic facing his first nightclub audience.  A firing squad, perhaps.  Shark attack, maybe.  What would possess a person to voluntarily mount a stage and subject themselves to the potential ridicule of strangers?  The hint, the hope, the chance of laughs.  It is a strange and unshakable urge that grips a very few among us to seek this.  Part-masochist, part-mercenary, we know these people as stand-up comedians.

Windsor native, Dave Merheje is a veteran stand-up comic who still exudes the wonderment and enthusiasm of a newly minted comedian.  With nearly 20 years in the business, he still recalls his first time performing on stage:

“It was at Yuk Yuk’s in downtown Windsor, I was 19 years old, and it was the Windsor stop in a comedy competition looking for ‘Canada’s Funniest Comedian,’” Dave recounts in a video created by St. Clair College for its “Alumni of Distinction” series.  Dave is a 2020/2021 honouree.

“I did about seven minutes of material in about three minutes,” Dave continues.  “I was talking too fast, I didn’t understand the structure of comedy.  And I did not do well.  I believe I bombed, horribly.”

What is the only thing braver than a comedian facing his first audience?  Facing his second.  Dave faced his third audience, and then his fourth, and never looked back.

Today, Dave Merheje can be seen as a recurring character on two popular TV shows: as the character, Ahmed, on Hulu’s Ramy, which the Internet Movie Database describes the show: “In New Jersey, Ramy, son of Egyptian migrants, begins a spiritual journey, divided between his Muslim community, God, and his friends who see endless possibilities.”  As well, Dave appeared in seasons seven and eight of the CBC comedy, Mr. D., as the character Mr. Bechara.

Although he’s making good on an early dream of being an actor, Dave’s been rocking the comedy world for the past decade, winning the Just For Laughs Homegrown Comic Competition in 2011, and taking home NOW Magazine’s Best of Toronto Award for Best Male Stand-up the same year.  In 2012, Dave joined the NBC Stand-up for Diversity tour and was a Canadian Comedy Award-nominee for Best Stand-up.  In 2018, he released his comedy special “Good Friend Bad Grammar” and won the 2019 Juno Award for Comedy Album of the year.  His most recent comedy special, “Beautifully Manic”, can be viewed on Netflix.

And to think, his earliest ambition was a career in radio.

“The school was London/Fanshaw and my mom… she didn’t want me to leave the city,” Dave says in the “Alumni of Distinction” video.  “So, she was like: ‘You’re not going.’”

So, Dave shifted gears and entered the marketing program at St. Clair College.  The schedule and expectations of school life strengthened the work ethic he had learned from his parents.

When he wasn’t studying or attending classes, Dave worked on his comedy, moving through the slow, painful process of bombing, succeeding, sort-of-bombing, sort-of-succeeding, and learning all the time.  Dave was driven, but he was young, and one day he received a reality check from a club manager, who said: “I’m not letting you on anymore.  You’re not getting into it.  Others are putting in more work and getting passed you.”

“That changed everything in my mind,” Dave remembers.  “I started to hit the pavement, let go of the partying, and crossed over to Michigan, doing open mics five to seven times a week.”

Upon graduating from St. Clair College, Dave employed all that he learned in the marketing program to promote his comedy career.  He moved to Toronto in his mid-20s, then spent six months in Los Angeles checking out the scene.  There was one touchstone experience in L.A. that, at once, had nothing to do with comedy and had everything to do with it: it was the night Dave had a gun put his head during a mugging.  Whether it’s being a comedian, or simply who Dave is as a person, but the ugly experience forged a positive outcome.

“The robbery happened at a point where I was trying to find my voice, as a comedian,” Dave says.  “And the experience kind of sped that up.  It made me realize: ‘Just do what you wanna do.’”

This led to more and more spots at comedy festivals.  A naturally personable guy, Dave enjoyed meeting new people, which made him an incredibly effective at networking.  At one gig, he met Ramy Youssef.

In the fullness of time, Ramy created a show that would be picked up by Hulu, and he asked his friend, Dave, if he wanted to audition for a role.  Dave seized the opportunity, and has portrayed Ramy’s onscreen buddy, Ahmed, since the pilot episode.

As the world struggles to emerge from yet another COVID-19 wave, Dave remains focused on his projects:

“We just filmed a comedy special at Just For Laughs CTV Comedy Channel on Crave,” he says.  “Season three of Ramy will be filming this year, as well.”

He continues: “I’m also working on a TV show about Windsor, and the title would be ‘Windsor.’  I’m working on it with a friend.  We’re just putting it all together right now.”

Dave is quick to credit his parents and siblings for their support over the years.  The City of Windsor, as well, has provided much inspiration.  St. Clair College reports that Dave “was pleasantly surprised to have been recognized for his academic achievements” when told he was being named among the 2020/2021 honourees as an “Alumni of Distinction”.