It Was Twenty Years Ago Today

For the past two decades, The Drive has provided Windsor a unique view of itself
Author: Matt St. Amand
Photographer: D.S. Hunter
1 year ago
|
No Comments
Share On 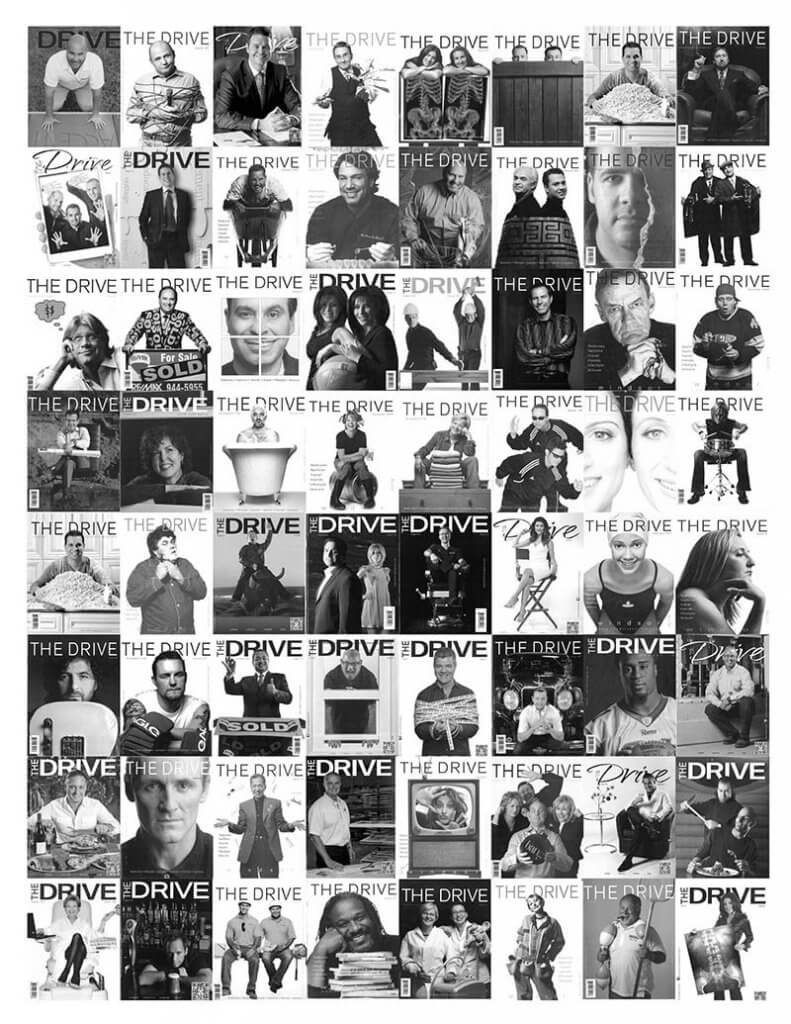 In a sea of glossy colour, it was The Drive’s black and white cover that caught everybody’s notice.

In the past two decades, The Drive has profiled countless businesses and personalities, such as Cam Gardiner, Jody Raffoul, Colm Feore, and “Thirsty Traveler” Kevin Brauch, and has told stories about Windsor that often left readers thinking, I never knew that.

Although Dave Hunter is the face most associated with The Drive, he and his business partner, Mark Long, purchased the magazine from Kevin Kavanagh, its first publisher.

The year 2000 was a time when the Windsor magazine market was bursting with competition. What inspired Kevin to enter that crowded space?

“I was a big fan of publications like Hour Detroit,” Kevin recalls, “and I thought there may be room for an entertainment-lifestyle perspective in Windsor.”

The signature black and white look of The Drive mirrored Kevin’s photography aesthetic.

“I specialized in black and white,” he says. “I had my own darkroom, and I thought it would stand out and give us a brand identity.”

For the first cover, Kevin convinced CKLW’s Cam Gardiner to pose in his pajamas with bedhead hair and shaving cream all over his face. It was a hit.

“After that, we got calls from numerous people asking how they could be on the cover,” Kevin remembers.

Too often, with success, there comes a “careful what you wish for” moment.

“I started The Drive with a partner,” Kevin continues. “I was the artist; he handled the business side.” Forces were such, at that time, that Kevin’s partner had to go his own way.

“Rather than fold, I took over the magazine,” Kevin says. “At times it was thrilling. Often, it was exhausting. I published six issues. Shooting the covers was the most fun. I wanted each to tell a story without words. I remember having Paul St. Pierre of Landscape Effects posing, sitting in a wheelbarrow. I kept saying to him, ‘More aggression, Paul! You’re on a roller coaster!’”

There came a point where the 16-hour days caught up to Kevin and he considered folding The Drive.

“At that time, I had no life outside of work,” Kevin says. “Then, Dave Hunter and Mark Long approached me out of the blue, asking if I ever considered selling.”

Nobody would believe the timing if they saw it in a movie.

After some productive negotiations, Dave and Mark bought The Drive.

“I remember the first time I saw The Drive,” Dave says. “I was in Rosser Reeves Jewellers, and Kevin had just dropped off some copies. I grabbed one and went through it. Cam Gardiner was on the cover. I remember thinking the black and white was very daring. It immediately caught my attention.”

The first address for The Drive, with Dave Hunter at the helm, was 307 Chatham Street, a one-room office. Kevin continued shooting the covers for the next eight years.

“Here was an award-winning writer,” Dave says, “a guy you’d see around town, who wrote at a table in the library, and published books that were global.”

Then, there was the profile of actor Colm Feore, who originates from Windsor. Dave put his philosophy—if you don’t ask, you’ll never know—into action when he phoned Colm’s mother, Sally, asking for help contacting her son.

“Next thing I knew, Colm left me a voicemail,” Dave remembers. “It was like he was rehearsing a role: ‘Hello David. This is Colm Feore. I understand you are looking for me.’ The next day I went to Stratford with the writer and did the interview.”

Highlights of Dave’s time with The Drive include seeing the very first issue he published in December 2000. Five years later, Dave was named Young Entrepreneur of the Year by the Windsor Chamber of Commerce.

“That put us on a whole new level,” Dave recalls.

Scribing Windsor’s ongoing story, The Drive dedicated many pages to triumphs—subtle and significant—around the city, but also shared in the tragedy. Most notably, when Constable John Atkinson was slain in May 2006, his life and career were memorialized in a cover story.

“We faced our biggest challenges in 2008,” Dave continues. “The economy took a nosedive and advertising budgets dried up. We made every adjustment possible to ensure we didn’t fold. Somehow, we made it through.”

Times change and in 2017, Dave realized, “I got The Drive to a certain point, but the ad revenue wasn’t as fluid as it once was, and I was stuck at a standstill.”

That’s when Paul St. Pierre, owner of Landscape Effects, entered the picture. He was interested in having a voice in Windsor and felt The Drive was the best way to achieve that end.

“I didn’t want to sell,” Dave explains, “but if I wanted to get to the next level, I had to accept that I couldn’t do it alone. Paul had the vision.”

Anyone who knows Paul St. Pierre knows he has a unique outlook on the world. Recognized for his business acumen, Paul has carved out his substantial footprint in Essex County through his artistic vision. He prides himself on not taking things at face value and seeing beyond the surface veneer of situations.

“I come at things from a design perspective,” Paul says. “So, when I took on The Drive, I wanted each issue, each article to resonate with readers. We focus on impactful stories. I love stories about the underdog.”

Paul is no stranger to adversity in his own life, and readily credits friends and mentors for the many ways they have inspired him to overcome challenges.

During our video interview, Paul held up a book. “I keep this front and centre on my desk, no matter where I am,” he says. “These are all the text messages my friend, Bob Berry, ever wrote to me. After he passed away, his wife compiled them into a book and gave it to me as a gift. I always have it near me.”

Paul then holds up a classic Bic four-colour retractable ballpoint pen, popular in the 1970s and ’80s. “Another friend who had a big impact on me used these pens. He passed away some time ago, and I make sure I always have one around. We have these pens everywhere at the office, as a reminder.”

That is Paul’s vision for The Drive.

“I want The Drive to be something people leave on their dining room table,” he says. “I want to create something that people will remember. I want readers to see our covers and think, What is that? I want to know more about it.”

He also shares Kevin Kavanagh’s belief that The Drive’s covers should tell stories without words.

“No tricks,” Paul says. “The cover has to speak for itself and make people think, Wow, I need to pick this up.”

Some of the stories he has found personally memorable include a feature on Lionel Sanders, the triathlete from Harrow who has racked up more than 20 victories on the IRONMAN 70.3 circuit.

“He is a person who experienced adversity in his life,” Paul notes, “and overcame it.”

Other significant stories include The Drive’s article on human trafficking, where the cover depicted a survivor cutting a rope.

“Or the cover we did for ‘The Colourful Spectrum of Autism,’ with the puzzle piece in the middle peeled away and a child looking through the opening.”

Paul still remembers his own turn on The Drive’s cover.

“I had just come from a job site,” he says, “and hurried home to clean up, press my khakis, and iron a new Landscape Effects shirt.”

Kevin had asked him to bring some props along: a wheelbarrow, rake, and a bag of dirt.

“When I arrived, Kevin snapped a few photos,” Paul continues, “and next thing I knew, we opened the bag of dirt and emptied some into a bucket. Somebody added water, and they started rubbing the mud all over me. They wanted me to look like I’d just come from a job.” He laughs. “It was a blast. I threw my shirt in the garbage when we were done.”

It’s that spirit of spontaneity and creativity Paul wants at the core of The Drive.

“It’s like being on a Twister mat,” he says. “We can pivot in any direction as new ideas come along. My life isn’t a straight line. My businesses are not straight lines. The last three years have been a great ride.”