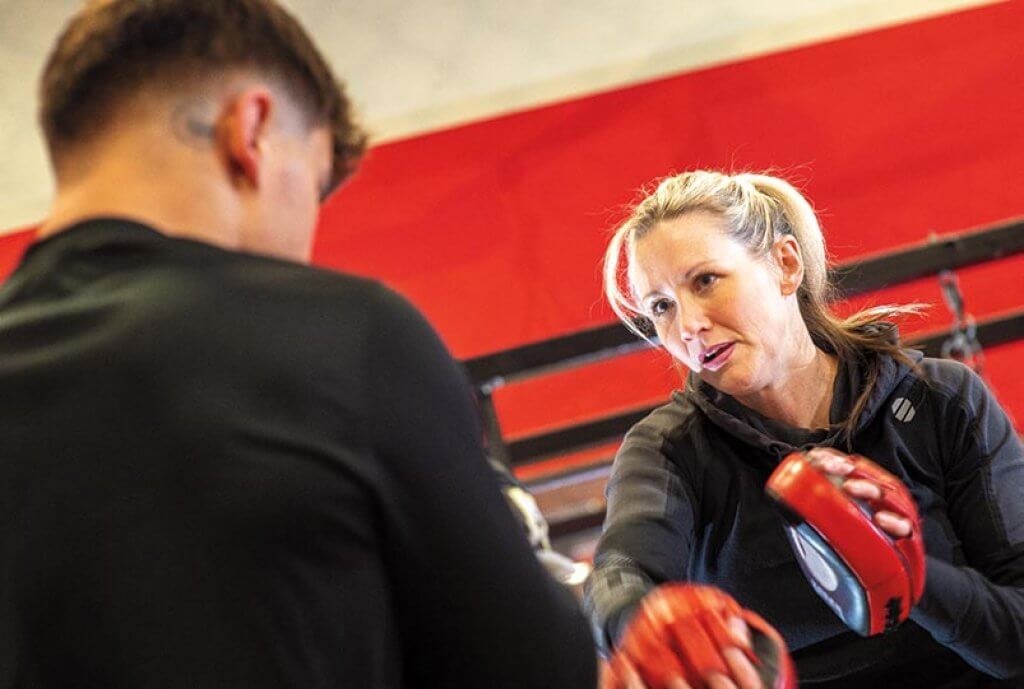 Kara Ro keeps a photo on her phone as inspiration. She was working as a boxing coach in the ring with a male fighter, helping him with his sparring. The photo went up on social media, and immediately someone posted, “He has a girl padding him, haha,” as if the male fighter couldn’t possibly be very strong if he was sparring with a woman.

Little did that commenter know they were talking about the one-time Women’s International Boxing Association lightweight champion.

Ro’s start in the industry came as almost a fluke—when her boyfriend made it onto the Florida Panthers and was encouraged to take up boxing, she learned it with him—but once she started training, she immediately loved it. She says there is a certain chess match strategy that comes with boxing and she loved the mental game of strategizing her moves to get a win.

When she arrived on the scene, she was one of the only females on a team of males. It is hard for any woman in her position to go up against men because, as she explains, it’s as if men don’t expect you to be any good or be able to keep up to them. She was determined to prove herself and show the men in the industry that she had earned her right to be there. “There is extra pressure on a woman to perform,” Ro explained. “I had to be better every single day. I wanted to look as talented technique-wise as the guys did.”

The only fight that she ever lost in her career was one where she didn’t believe in herself, she says. That loss, during her amateur career, has followed her into her career as a trainer. She works to makes sure that her fighters not only believe in their abilities but also become the best at what they do. Ro has excelled not just because of her sparring techniques, but because she’s tough as nails. In a professional career of 17 wins and 0 losses, she also boasts an astounding 150 to 200 underground fights under her belt where she was matched with fighters up to 200 pounds who perform with very few rules. Being in the arena of underground fighting is not for the faint of heart, but it was something that not only strengthened Ro’s skills as a professional fighter, but gave her more confidence as one.

She took that confidence into her new career as a coach in the early 2000s. She hung up her boxing gloves and brought her passion for the sport into training other fighters. Her first fighter was a local one, Mary Spencer, who throughout her career won World titles and earned her place in the Olympics. Ro trains fighters in both Canada and the United States—it’s clear when you see her working that the fighters that she trains hold her in high esteem. When I asked her how she managed to get that level of respect, she explained that she earned the respect of the people around her when they saw what she could do during training sessions, things the students had never learned before. “Once you start making people better, you get instant respect,” she says. “I desire to show my fighters their potential and I want them to be better than they think they could be.” Ro even trained as a coach while she was pregnant, holding pads and cornering her fighters when Fight Night arrived.

Like in many industries, when you are the only female, you have to work twice as hard to earn respect because others will think so much less of you in the beginning.  When she first arrived as a trainer, she discovered that students and other trainers expected her to work with women only. But Ro wanted to show the world that she could train a man just as well as the male trainers could. As soon as the others saw her working with the male fighters, any perceptions they had that she wouldn’t be good enough were quickly dashed.

And that’s why Ro keeps that photo on her phone as inspiration. It wasn’t so much the comment that bothered her—she could handle that—but the idea that the commenter was taunting women. Seeing comments like that one remind Ro that she and other women in the any male-dominated field still have a long way to go. A colleague of hers says, “She knows her stuff and that’s all that matters,” and Ro hopes that type of opinion of women in sports will become the norm.

Ro remembers a time when a young girl approached her after seeing her train a fighter and told her, “I never thought I would see a girl teach a boy how to box.” Moments like this one make it all worthwhile, Ro says, especially as she herself tries to raise her daughter to be strong and confident. “One of the best moments that I had was when I walked in on my daughter flexing in front of a mirror,” she laughs. Ro has raised her daughter and son around the gym, and they often will watch from the sidelines during coaching sessions.

One thing that she hopes to change in the industry is the assumption that a girl in the ring holding pads must be “the girlfriend” or the fighter’s chiropractor.

Ro faces this often and finds it frustrating that some people perceive her in this way instead of the professional and multi-talented trainer that she is. A man training a fighter in the ring would never be questioned in that way, she says. “One day,” she says with a smile, “I’m going to be known around the world. And then maybe people won’t be surprised to see a girl in a fighter’s corner.”

Ro is moving into the training world full time and growing more as a coach with both boxers and MMA fighters. She wants to become more well-known all over the world in order to change the way that women are viewed in sports.

“Find a role model to look up to,” she says. “Don’t succumb to the no’s around you or the naysayers. Find a role model that you can believe in and ignore the rest. If you can’t find a role model, then you need to be that role model. Be the first person that takes the step forward for others to follow you. That’s your job now.”