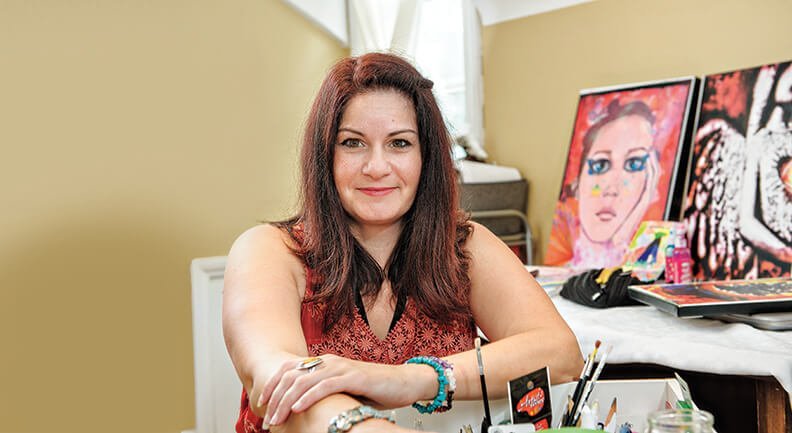 Christine Paris is an educator, a teacher’s coach, a mental health advocate. She’s a daughter and a sister. She’s also grieving the loss of her younger brother, Raymond, who passed away February 22, 2019, after struggling with schizophrenia, addiction, and mental illness. Paris has spent the last seven months working, planning mental health events and writing a children’s book.

“Instead of crumbling, I went into overdrive to deal with his death. Almost guiltily: I couldn’t save him, but how can I save someone else? I’ve got to do something.”

Mental health initiatives have increased drastically in the past 10 years, but Paris knows the stigma still thrives and her mission is to leave the stigma at the door, to offer safe spaces for people to speak openly about their struggles with their mental health. Her brother’s death has pushed her full force into her activism.

“Clearly we’re in a crisis. So many people are on our streets. Windsor didn’t previously have this problem and it’s related to mental health and addiction. We need to start talking about these things to help address them and improve them,” Paris explains.

Raymond couldn’t find the proper services to help him live with mental illness. He struggled with addiction for over a decade, and once he cleaned up, he suffered from schizophrenia for the last seven years, passing away at 41. The Canadian Mental Health Association (CMHA) encouraged Paris to bring Raymond to the ER, and they were there at least 15 times.

“You just sit there. Maybe there’s one psychologist, but they usually aren’t on staff. For his delusions, they would drug him more, but that was not good for his addiction. CMHA has a place for those in crisis, but they close at 10 p.m. and most mental health issues occur later in the evening.”

Raymond would ask Paris not to share his struggles with their parents, who both experience illnesses of their own from cancer to different surgeries. He would say, “Don’t tell them because I don’t want them to worry. They have enough to worry about.” Depending on the severity of the situation, Paris would have to decide whether or not to reach out to their parents. “It’s a fine line to decide when it’s essential and when to respect his wishes,” Paris explains.

From breakdown to breakthrough

When Raymond passed away, Paris believes she went into a “bubble of grace.” Tragedy brought her to action. “Whether it’s God’s grace or the universe—there’s something that happens when you go through a tragedy and you get into this bubble where you don’t feel it completely. You go into action preparing the funeral. For me, I went into action preparing this huge mental health wellness fair at my school with all these things to help other people because I couldn’t help my brother.”

As a teacher’s coach, Paris runs PD Day workshops and goes into classrooms to support teachers. She has worked for the French Catholic School Board in the primary division for the past 20 years, and switched to coaching five years ago. She supports mental health—including anxiety and stress—for teachers, students, and families.

“Often, I’ll take students in my office. It’s not my job, but we lack resources in the system.”

Paris’ project to increase resources at her school was to run a school wellness fair, which occurred June 6, and Let’s Talk Art, on June 13. As an artist, Paris encourages others to use art for mental health and wellness, and art creation has also been integral to her grieving process.

A community in touch

“The artist community is in touch in a way to express grief. Artists channel—not always consciously, but it comes out in their creations. A lot of art can help through grieving. What can happen when you’re creating art is that you’re in that present moment. The creative process envelops you. You aren’t thinking about anything; you’re just channeling your energy into that present moment of creation. It’s meditation to help you live each moment instead of being overwhelmed by past events,” Paris believes.

“Bringing all these artists together to raise funds for the cause was part of my healing journey. All had personal experiences—someone they loved had addiction and mental health issues or they had their own. The night was so special. It was a safe space where everyone spoke openly as if we were old friends. We all have this common experience that is not openly discussed in society, but in that space we spoke openly.”

While curating the events, Paris also wrote and released a book, called Gaia’s Journey, a story about our current disconnection with nature in today’s society.

“I tie it in to my brother because every time he was having his paranoia, the one thing that helped was for him and I to take a walk on a nature trail. He always heard voices so I would say I heard it too: birds, dog barking in the background. It was decompression for him. It wasn’t crazy noises in his head, but beautiful nature sounds.”

The name Gaia means Mother Earth, and in her book, Gaia’s dream is to explore nature and the excitement around her discoveries.

“The underlying lesson is that our kids don’t play outside anymore. We’ve lost this connection that’s so important. It’s about bringing that connection back. Play in the yard. Connect.” For Paris, focusing on her mental health means practising yoga, creating art, and walking in nature. Also knowing when to attend events or stay home is an important part of fostering positive mental health practices.

“There’s a limit. You think, that doesn’t feel right, right now. I’m not going to do it. You need to act upon that without regret and obligation and people giving you a hard time.”

Being able to talk about how you’re feeling in a safe place is also integral. “In a school board setting, I can’t talk about my brother’s addiction. Never did I tell them at work, ‘I brought my brother to the hospital this weekend because he tried to OD for the fifteenth time.’ It’s not something that’s discussed or I could ever share. So I found a place with people I can share it with and that’s the arts community.”

In her art practice, Paris created a mural at Street Help and had a BBQ for the homeless. They sang “All You Need Is Love” in front of the love mural and they brought joy instead of the darkness people expect from a shelter.

While touring her book and planning her next mental health event, Paris hasn’t had a moment to exhale… yet. Her next event is Let’s Chalk About It, “where people take chalk and write/make art about how they’re feeling in front of store fronts, streets, libraries. We need to have professionals available, not just have people write how they’re feeling and nothing happens.”

There is so much goodness to come from the work Paris is doing. In the meantime, she’s sold her house and moved closer to her parents to help them with their own physical health issues and will continue to fight the stigma with conversation and creation.

At the end of our interview, I call Paris “amazing.”

“Amazing or broken?” she laughs.

Broken and amazing. Maybe we can be both.

The Drive is going digital for May!

Grab a coffee or pour a glass, The Drive is coming directly to you this May!

We have curated our line-up of content that our audience and advertisers have come to expect from us and are vigorously seeking as a diversion to the world around us.

Our social media partners Arms and Kerri Bumanlag are going to help us deliver these stories to continue our reach of 50,000 engaged readers – the only difference is the on-line delivery.

Your experience has always mattered most to us, and so it is essential to explain how the new elements that will roll out.

We will be bringing you a new article every couple of days for the first few weeks of May. With mother’s day around the corner, these stories will mean more than ever with the additional layers of responsibilities we all face in our new reality.

So why not take a break from e-learning, working from home or from the latest breaking news. We hope you continue to enjoy The Drive experience and share it with others.

We want to stay loyal to you – thank you for staying loyal to us.