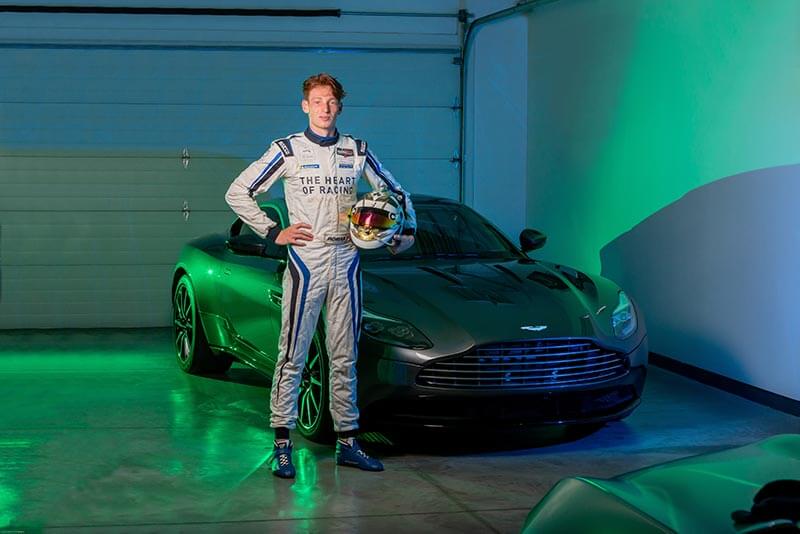 Like a copper-haired, steely-eyed bomber pilot, Roman De Angelis barreled down the track at the Detroit Grand Prix with perfect precision and breakneck speed. A blur of blue and green, The Heart of Racing Aston Martin streaked like a bat out of hell in search of the checkered flag.

For this 20-year-old Belle River native, the need for speed is a passion, and he and his team have no interest in second place at what is essentially De Angelis’ hometown track.

Like an Olympic relay runner, De Angelis passed the wheel on to teammate Ross Gunn, who finished what the young man started. Fulfilling a childhood fantasy, De Angelis’ first run at the big track across the river ended in victory.

“We had our season-best qualifying, so we rolled off third for the start of the race,” said De Angelis. “I dropped back a bit at the start but was able to pick up a few places because other drivers had a couple mistakes and incidents.

As the starting driver, the faster De Angelis could make it to the midway point of the race, the better chance his teammate, Ross Gunn, had at bringing home the checkered flag for The Heart of Racing team.

“I was in second, catching the leader, and went out at the midway point for our driver change,” recalled De Angelis. “My teammate, Ross, went in, and we were in second at that point. He chipped away at it, trying to catch the leader at the end, and we finished second.”

The team was pleased with the finish, but an unexpected turn of events led to a great surprise.

“There was a post-race infringement for the other team, and they were disqualified, which gave us the win,” he explained.

On June 12, De Angelis conquered a boyhood dream, winning the Detroit Grand Prix, a race he had grown up watching with his father.

“It’s a great event, and the track is really cool as well,” he said. “It’s a cool old school street circuit, so there’s not much room for error there at super high speed.”

“I think that everybody wants to race in their own backyard. A race like the Detroit Grand Prix – it’s such a beautiful city – I love Detroit.

“I feel that, before all of this pandemic stuff, I was there once a week for dinner, a sports game with friends, or walking around. I’ve always loved the city, and I’ve been to the race pretty much every year since it’s come back – recently for meetings, but also to watch with my friends or my dad. I’ve always been in and out of that venue and have always enjoyed what they do and how they bring fans in and the city together.

“I think they bridge Windsor and Detroit to make a big event in the middle of both of us.”

De Angelis is happy to pick up the win with Gunn and The Heart of Racing team.

“To do it at home is super cool, in a race that I was looking forward to competing in so much,” he explained. “I’m really happy for The Heart of Racing and Aston Martin on getting their first win in the WeatherTech Championship, with our team being in the only Aston Martin. That’s a great feat, not only for the team but for the Aston Martin brand in general. I’m happy for everyone. They did a flawless job all weekend, and in the past years, we’ve had some really good results, and it’s nice to have it finally pay off and get a win.”

De Angelis is proud to be a part of The Heart of Racing team, especially for the generosity and support they provide to those in need. The team makes large-sum donations to the Seattle Children’s Hospital, a project that De Angelis says they actively raise money for.

“They make a lot of donations,” he stated. “There’s been a massive amount of money that’s been donated through our on-track ordeals. What we’re doing is not only exciting and fun, we’re racing cars, but we’re doing it for a cause. We’re doing our race, but there are kids and other people in the hospital who are fighting their own race against whatever their disease is.”

“My middle name is Senna [a nod to the racing great, Ayrton Senna da Silva], so that is a massive portion of where my passion and drive came from,” admits De Angelis. “My dad did racing, and growing up watching the IMSA championship, which I’m in now, watching F1, watching Le Mans, I always had a passion, I always enjoyed watching it. I always enjoyed cars.”

However, his progression in motorsports wasn’t automatic. It was gradual, in small doses, allowing his curiosity for the sport to propagate and then slowly boil to a fever pitch.

“When I was about six or seven, my dad bought me a go-kart,” recalled De Angelis. “We’d go about once a year, and I really liked it.”

“When I turned 10, my dad said there was an opportunity to go race if I wanted to try and race go-karts. I started in Point Pelee; there’s a club there. I won my first race, and I caught the bug. From there, it just kept building and building, and it took up a massive chunk of my life from that point, but I would never trade it for anything.”

De Angelis quickly made a name for himself, eventually becoming a national go-karting champion, before moving on to Formula 1600 racing and winning Rookie of the Year honours. In 2017, at only 16 years old, De Angelis competed in the Porsche GT3 Cup Challenge Gold Class in Canada and the US. As the youngest driver on the circuit, he made history by becoming the youngest Canadian championship winner, while finishing in the runner-up position in the US.

In 2020, when De Angelis joined The Heart of Racing team, he found himself among his heroes, among men he had grown up admiring.

“The first few weekends last year – after I signed a pro contract and was in a professional series where everyone is a professional and at the peak of their careers – were a bit overwhelming, as I was racing against guys that I always looked up to,” admitted De Angelis. “I’m pretty young, so five to seven years ago, I was watching these guys – like Kevin Magnussen, who’s in F1, big names from the Global Racing Series, IndyCar, Jimmie Johnson from NASCAR – anyone and everyone runs in it because it’s such an enjoyable and competitive series.”

Once the butterflies wore off, he soon learned that, although he looked up to these drivers, they were also just human. “The first few races were a bit nerve-wracking, to say the least, but once you start getting in a rhythm and understand that these are just other guys who are here for a reason, just like you are, you just pull your visor down and do what you can to beat all of them.”

One of the perks of the job? How about driving an Aston Martin?

“Of course, driving Astons is cool,” said a grinning De Angelis. “They are a beautiful car with a very rich history, and now I’m a part of their driver academy. They give you support, and you have to send them a couple things after every time you race – about the weekend and stuff like that.”

“It’s an iconic brand. They have a lot of racing history; they’ve won a lot, so I want to see if I can add to that.”

De Angelis explained that driving a race car isn’t just simple driving. It is more about endurance – it’s like a marathon – and once he’s dialled in, it’s hard to compare the experience to anything else in sports.

“It’s such a mind game, and there’s so much going on, and so much that can go wrong,” he stated. “There’s not a sport with more factors than racing.”

“I have one experience that I remember vividly, where I was in a 45-minute race, and I asked my team how long was left until the end of the race. They were like, ‘Five minutes,’ and I thought there was a half-hour left.”

Sometimes, it goes the other way. “You’re three hours straight in a car sometimes. It’s like you drive to Toronto, you’re tired at the end, but try doing that at the end of your mental capacity, and there are 40 other cars around you. You have traffic, lights, people driving into you – it’s gruelling, and it’s hard for people to understand.”

De Angelis and The Heart of Racing team are into the heart of their season, with plenty of races still to go. De Angelis is looking forward to what the remainder of the season brings.

“Right now, we’re leading the championship, so we’re hoping to keep picking away at top-five results and grabbing podiums and wins when we can – when we’re at a track that we’re capable of doing it,” stated De Angelis. “The team’s been doing an awesome job all year. Me, my teammate, Ross, and then Ian James, who is in for the endurance races, we’re all looking strong for the rest of the season, so I’m sure we can keep the momentum and keep the ball rolling and hopefully grab some more points to have the championship at the end.”