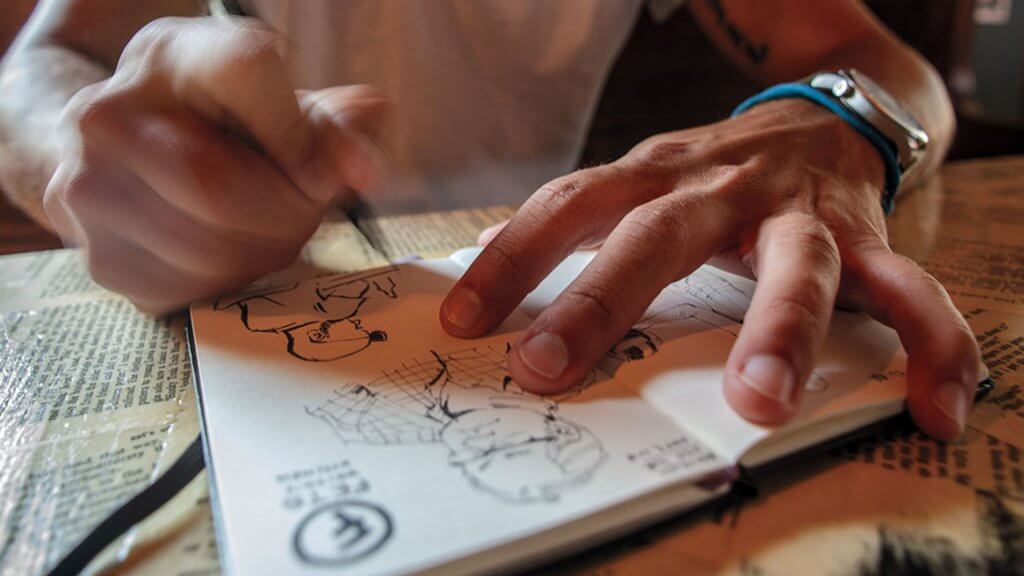 Shuffling through the drawers of his father’s study at age three, Matt Boismier found himself completely mesmerized by one piece of his father’s artwork in particular. It wasn’t the breathtaking watercolour painting, but the youthful “Cool Shades” comic strip that caught his eye

“After that, I drew a banana and my parents framed it. That was it—I thought I was famous,” Matt tells me as we sit on the patio of the local Starbucks in LaSalle. He has an easygoing quality about him, a relaxed nature appropriately paired with a Billabong shirt and effortlessly coiffed hair—clearly a surfer and an artist

Growing up in Belle River, Matt was always known as the “art guy.” From working on backdrops for the school play to eventually completing the Tradigital Animation program at St. Clair College in 2006, he never had a “Plan B.”

“There was no other option for me because Plan B becomes Plan A really quickly. You have it in your head, so you start leaning towards it.”

Along with being the “art guy,” Matt was also known as the kid who was always authentic to who he was. Matt’s brother constantly teased him for his awful taste in music, movies and art—but he also praised him for having the confidence to walk to the beat of his own drum

It took Matt five years after graduation to make it into the industry in the fashion that he wanted to, but again, he wasn’t going to do it the same order as his fellow graduates and friends

“I could have been the junior-coffee-getter after graduation, but I had this ego that I had to do it my way. Someone had to give me the position that I wanted.” So, he swallowed his pride and moved home to Windsor after going broke in Vancouver. He worked 27 different jobs and most of them had nothing to do with art

Initially all of these experiences felt like failures for Matt, but it turns out that the refined skills that he gained actually led him to be the successful artist that he is today. One job in particular, his summer spent working as a caricaturist at Canada’s Wonderland, shaped the way in which he now works.

“You’ve got to hustle because it’s commission-based, and you need to have an appealling style. Once you make the first mark, you can’t turn back—ever. You’re performing in front of a crowd and you need to make it look like magic.”

Matt learned how to please clients, and that he thrived best under pressure and with certain parameters. Once he did enter the industry, he was anything but a rookie

And it was right in Windsor that Matt got his first job in the industry, working for his friend Jacob Duhaime at iDream Interactive

“I’d heard about his company, and almost all of my friends worked for him. He came into the bar where I was working and said, ‘Matt, you have too much talent, you have to come work for me.’ But I was happy doing my freelance stuff and I turned him down. Eventually, he came in on the right day and asked again. I was tired of the service industry, and I said yes.”

Once accepting the position of art director with iDream, Matt had total creative freedom and could work on whatever he liked. It was exactly what he needed to create the portfolio that would bring him back to Vancouver

He applied for all of the big-name companies, and eventually found himself at Nerd Corps Entertainment. Because of his past experiences and his raw personality, studios loved working with him. From there, it was absolute rapid fire in terms of work and success for Matt

Going into the industry, Matt didn’t even know what it could pay, and as soon as he realized that he could make a lot of money, that’s all it became about. “Everyone wants to move up, get higher titles and more money, but I realize now that every time I took a job for money it was the wrong choice.

“I finally achieved my goals. It was so fast, and I wouldn’t even get used to the new paycheque or title before I had another one. I basically hit everything and then was lost, completely. I had no direction because I had never thought about doing anything else. All I’d ever wanted was to be recognized in the industry, and I was no longer chasing anything.”

He realized he had success at his fingertips and could never let himself see it without looking at the next goal, until there wasn’t a “next.” Instead he would think, “Big deal, I’ve been a character supervisor and it actually kind of sucked.”

Matt wasn’t drawing anymore and found himself just sitting in meetings all day. When he worked with big clients like Mattel, he was exhausted by the executives who knew nothing about storytelling and just wanted to sell a product

He had achieved success, but he thought, “Now what?”

“There’s no motivation like a bad job to help you start over. As cliché as it is to find yourself through travel, I did. I had to scare myself to appreciate the paycheque. Now when a client wants work, I look at it differently, and that’s pretty important.”

Now Matt hears a big name like “Disney” and actually turns down that type of work. All he can hear connected with that name is “too many people to please” and that’s just not how Matt works anymore

“Making it” can mean something different to everyone; for Matt, it meant retiring from studio design and going back to his freelance days as a self-employed animation art director and character designer. He’s constantly changing gears, staying active through volleyball to counteract sitting at a desk all day, and taking breaks to travel often and get back to his art.

“One of the hardest parts is staying creative and keeping that passion alive. Working in animation, especially concept work, can feel like a production line. You’re usually signed on for 15 episodes, and even though you’re drawing, it’s the same every time. It becomes deadening and you need to flex your muscles.”

That’s where travel kicks in. Matt has always found that art is something that he does on his own, and rather than associating with others in the industry, he finds the most inspiration while he’s travelling solo, surfing and painting by the beach

Matt’s next creative endeavour is one that helped him through his own artistic rut: vlogging. Matt says that with film he gets to build everything from start to finish, and he has all of the creative control. It’s the ultimate sense of freedom for him, and he hopes to reach someone who is ambitious enough to try their Plan A. Because if they have the right mentality about it, they can achieve huge things even in a small town.

“It’s on you. You can’t rely on the school, no matter how great, or anyone else. You just have to do it, work hard and form it how you want. Then you can make anything happen.”

You can find more of Matt’s creative work on his Instagram @thetooninator, or his new Youtube channel, 2ninator