Meta Makers Cooperative a space for every maker 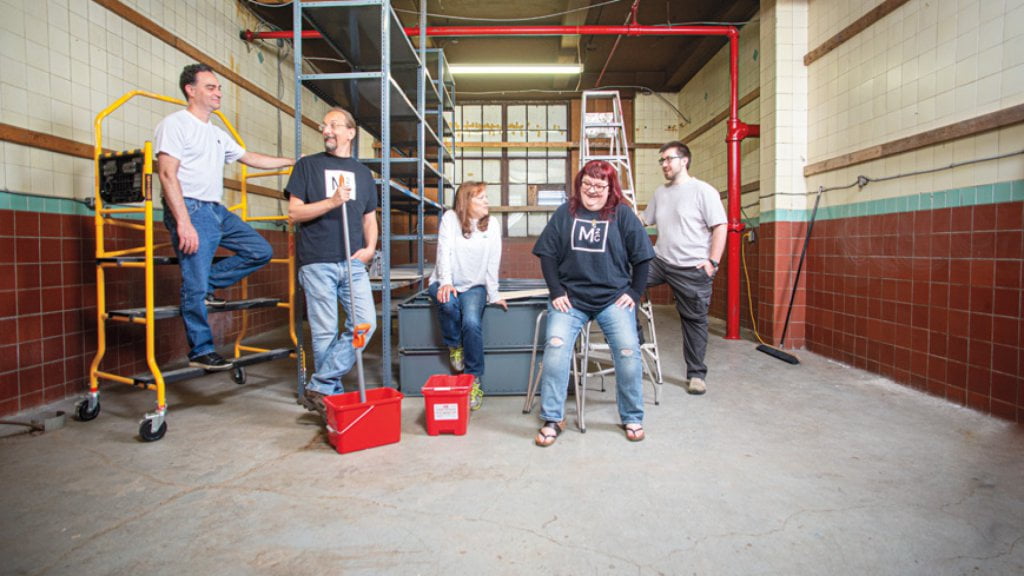 Heavy rain washed over the city as I walked to the coffee shop where I was set to meet the Meta Makers. The thick covering of grey clouds accentuated Windsor’s industrial skyline, a backdrop that fittingly celebrates the makers, the creators, and the ones who have built this city with their own hands. I wasn’t sure what to expect or who I was going to meet, a scenario that always twists my stomach into knots. As I ducked into the bustling café on that Thursday night, I was met with five smiling faces and the worry melted away

Jo Taylor, Nik Steel, Pauline Burnett, Roberto Caruso, and Shawn Wilson are the visionaries behind the Meta Makers Cooperative, a makerspace looking to unite Windsor’s splintered artist community into one collaborative workspace. From the moment I sat down with them, the conversation was effortless. Quick introductions seamlessly transitioned into in-depth discussions of art and tech within the Windsor community. Each of the five founders is a maker in their own right, with skills ranging from software development and electronics to woodworking and pottery, just to name a few

“Should we head over?” said Jo, suggesting that we make our way to the makerspace located on the second floor of Sho Art, Spirit & Performance studios. I tried to hide my excitement knowing I was getting my first sneak peek into Windsor’s newest makerspace. We continued our conversation during the quick walk over, the buzz building with every step

The barren walls of the newly acquired space were already filled with intention; the creative energy was undeniable. After a quick tour where they described their vision for the space, the six of us sat down in a perfect circle in the middle of what will soon become a hub for creators, innovators, and makers of every kind.

“It started over some beer,” said Roberto, causing a roar of laughter in the group, a recurring joke that had made its way into most of our conversations that night. His story took us back to the bud of inspiration that motivated him and Shawn to begin discussing the possibility of creating a makerspace. The vision came about after a visit to i3Detroit, Detroit’s largest community-run workshop. That group not only served as the inspiration for the Meta Makers Cooperative, but has also provided support and guidance for the new makerspace. Shawn and Roberto wanted to create something similar, a space where members could hone their skills, learn new skills, and meet like-minded makers in the area.

“We talked about starting it, but we had no idea what we were doing. We were trying to figure out how to make a co-op,” said Shawn. “We didn’t know how to make a co-op, we didn’t know how to make a company, we didn’t know anything about anything.” The pair worked together for over a year, learning the ins and outs of building a company and creating a co-op. Founded on the concept of participatory governance, cooperatives (or co-ops) are based on the principles of education, community, and empowerment. For the Meta Makers, this means members could truly help mould the space while also practising existing skills and acquiring new ones. “Members could even learn new skills they can apply to a second career,” added Jo.

Shortly after, Nik, a software developer with experience in music and the arts joined the newly formed group. Their vision was slowly coming together but they were missing one key component. “The guys had said they really wanted to get the female perspective, to bring the craft element into this because they’re tech guys,” said Pauline. That’s when she and Jo, a self-proclaimed “Jo of all trades,” joined the team

Since its inception, the Meta Makers have dedicated countless hours to turning their innovative dreams into reality—dreams that include a 24-hour workspace where all members can safely learn, create, and socialize

“You can walk in with a certain background and someone is in there doing something you never even knew could be done,” said Nik when asked about their vision. “You see them doing it and you’re like, ‘oh that looks like a piece of cake.’ Then you start talking and you create.” Membership opportunities—annual, semi-annual, or quarterly—are open to everyone over the age of 18—whether you’re interested in learning about creative outlets, you’re a do-it-yourselfer, or you just like to tinker and create, Meta Makers Cooperative provides a platform for ideas to grow. “Sometimes you have that mentality where you’re restless if you’re not working with your hands or your mind, and you don’t know where to go,” said Jo. Now those restless hands have a second home located at 628 Monmouth Road in Windsor’s historic Walkerville neighbourhood.

As to when the space will open, “that all depends on sponsorships,” said Pauline. “We hope to be open by the fall, but with the right sponsorship, we could be open earlier.” Although the group hopes to sustain itself with their membership program, the Meta Makers are still looking for sponsorships to help launch the makerspace. With visions of 3-D printers, laser cutters, woodworking stations, and more, the group hopes to receive more funding to help their business model grow and succeed to provide tools and resources to suit any and all makers

“The model is self-sustaining with enough membership. Any extra money that comes in gets channeled into making it bigger and better—bigger space, better equipment, whatever the membership decides at the time,” said Jo. Community outreach is a major part of the Meta Makers mandate, with long-term goals of eventually becoming a registered charity. “Our multi-talented member base will now have the means to connect with the community and offer classes/workshops to include kids, youth, and seniors,” said Pauline.

At its core, Windsor is a city of makers. We take pride in our tradespeople, our artists, the hardworking members of our community who have put our city on the map. “It’s always surprising,” said Nik. “The more you kind of lurk around downtown or in the Walkerville area, you find out that there’s really an interesting arts community in Windsor. There are a lot of galleries and a lot of artist groups, performance groups, music groups. There is really a lot going on but they don’t advertise themselves maybe as well as they do in another city, so that’s also something we’re trying to do. To unite those groups.”