How Christine spearheaded a “Green” movement that could eventually become the salon industry norm
Author: Alley L. Biniarz
4 years ago
|
No Comments
Share On 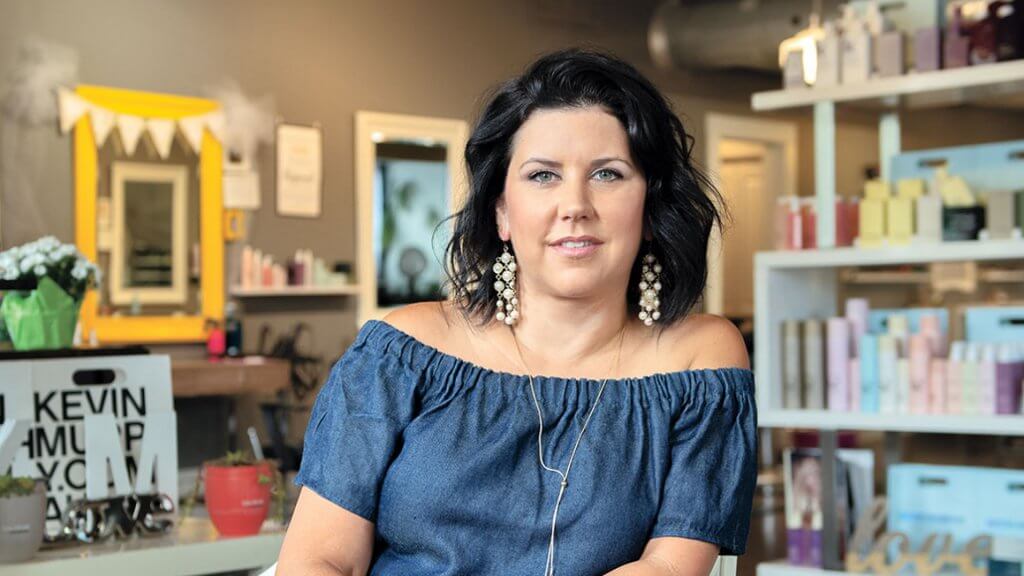 Christine Withington didn’t consider herself to be the most eco-friendly person. She was just a business owner who wanted to bring something new to the salon industry—or at least, that’s how it began

Christine fell in love with a product, but she had no idea that her switch to Kevin Murphy would result in an entire sustainable future for her business, Salon Cure, and for herself

The high-performing hair product was everything she was looking for and more. With the line being sulfate-free, sustainably packaged and sourced, Christine saw a future for her business that allowed haircare and eco-friendliness to co-exist: something that was not normally said about the industry

She had to make a choice then and there, and she removed every other product from her shelves. Though doing this was financially nerve-wracking, Christine went with her gut and she began researching more about the brand and her options. She was obsessed and excited about the possibilities as she scoured through other Kevin Murphy salon videos. And that’s when she saw the final touch– that last bit that would change the nature of her salon: Green Circle Salons

“I found out that not only could we recycle hair, but our aluminum foils and colour tubes could be recycled too. The amount of hair that we collect is crazy, and instead of throwing it into the garbage, here was this alternative. I thought about the bags and bags of product that wouldn’t have to end up in the garbage, and my excitement grew,” Christine says

So what happens with the “waste” instead?

Once the salon’s waste is sent to the Green Circle headquarters in Toronto, the company properly filters and disposes of hair dyes and other chemicals by separating them from the water, keeping them out of our water treatment plants. The hair collected is taken and made into wombs to clean up oceans and lakes. With the abundance of excess hair collected recently, a few pilot projects have been launched, such as creating bio-plastic bags, or making pillows for dogs in shelters. Finally, the aluminum taken from colour tubes and foils is often repurposed into bike parts

The first step for Christine was to receive specific boxes from Green Circle. The boxes are sorted into separate “waste” materials—foils, dyes and bottles—and the second step was to ship it back to Toronto via UPS. Christine loved the idea of being able to look around her salon and say with confidence that nothing there would go in the garbage. It could all be repurposed or properly recycled

Christine’s entire purpose became about the environment. She wanted to be able to ride her motorcycle through our country and look up at the clean blue sky. She wanted to stop seeing algae-blooms in our lakes. She learned that most of our earth’s problems was with our landfills and the lack of awareness about waste management, and she needed to be part of the solution

“It’s all about teaching and education. In grade school we learn about leaving things tidy, and to put things back where you got them—this sort of respect for others includes respect for our environment.”

After replacing all of her traditional products with “clean” products, Salon Cure was named the first Green Circle Salon in Windsor. Christine hoped this would spark others to change but after a few years she was shocked to hear that she was still one of the only ones in the city

“Of course it made me happy to still hold this title, but I was a little disheartened. We needed to be doing this as an industry. We need this to catch on. As a community we are so devoted to supporting local, and this is about our business doing its part in the community.”

It wasn’t enough that she was alone on this journey, and so this past Earth Day, Christine decided to open up the conversation to other salons. She invited them to do their part and challenge the norm that was the competitive salon industry

“It’s usually ‘you do your thing, and I’ll do mine,’ but it’s a beautiful thing when we can all come together to maybe change who we are as an industry.”

Christine’s concept was to bring as many salons in the area together to collect as much waste as possible between Earth Day and World Ocean’s Day (April 22 – June 8), to weigh it in, and share the results with the community.

When Christine reached out to Jennessa Couture, owner of the second Green Circle Salon in Windsor, Bounce Hair Boutique, Jennessa knew this was something that they had to do.

“Global warming seems like a really big task to tackle, and it becomes overwhelming. But if we work together to all do our own little thing, we make it conquerable. This is my way of making sure that as a business, we are being as responsible as possible.”

After gathering nine salons for the event, they collectively saved 536.4 lbs of salon waste that would have otherwise been disposed of improperly

“It just starts small, but every little bit counts. Remember the saying: reduce, reuse and recycle? It is that simple!” says Christine

Carla Homenick, who helped organize Pop Hair Gallery’s involvement with the challenge, says that their salon thought they were already doing their part in being as ecologically friendly as possible. It turns out they were throwing away half of their products to the wrong facility.

“We weren’t paying attention that you could recycle hair colour or plastics. It definitely made us more aware of how we can be more diligent in our neighbourhood,” says Carla

That’s everything that Christine could have hoped for in creating this challenge: to educate and inspire change in other industry professionals. She’s looking forward to finding out if any of the other nine salons that participated in her event have made the switch to be part of the #GreenCircleWEMovement.

“It’s not a movement yet, but it could and can be. We all make a choice, and this has been our choice. I’m proud of myself, I’m proud of my staff and grateful to my clients who have supported me in this decision. If we all keep it going, it could become the industry norm, and we could eventually say, ‘This is just what we do.’”

Since Christine is a large salon combined with esthetics, she has invested in the big package option with Green Circle that also accepts wax strips and nail polish bottles, but there are also boutique pricing packages available for solo stylists or those renting chairs. It’s a program that most salons can aspire to participate in, and one that Christine is happy to talk through with anyone curious to start.

“I encourage people in the community to just talk about it. Customers: have a conversation with your stylist—tell them you’ll support them on their journey. Owners, stylists: talk to your families, friends or even me. I would be more than happy to talk about the transition. Was it scary in the start? Yes. But we have more clients coming to us now, and it offsets the extra cost.”

The small changes that Christine has made to her salon have already made a difference in both her business and the environment. Between switching to LED lightbulbs and installing eco-heads that will reduce the water and energy uses by 65%, she is happy to not be contributing to the problem.

She’s part of the solution, and the start to the future Windsor-Essex salon industry movement

Through the lens of Steve Biro